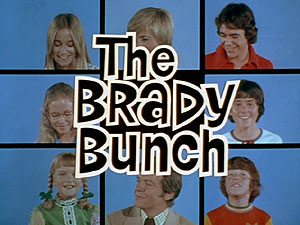 
The Story So Far…
Mike and Carol Brady married back in 1969 and five seasons later, they had cemented their spot as one of TV's iconic families, three girls and three boys, brought together to create as perfect a family as possible. Today, the show is a campy relic of the past, but it's got plenty of charm as a retro memory for anyone who ever sat in front of a TV and wished they could have been a Brady.

The Show
There are memorable episodes in every season of The Brady Bunch, but no part of the run is as ingrained in America's mind as Season Four. Right from the beginning, the episodes on this DVD are the ones that pop into your mind when you think of the word "Brady."

The first three episodes of this set feature the show's legendary trip to Hawaii. For the select few who don't have this adventure burned into their brains, Mike Brady has to head to the island state to check out one of his firm's projects, and brings the brood along for vacation. Once there, Bobby finds an idol statue that brings bad luck to Greg during a surfing competition, and lands the boys in deep trouble in some Hawaiian caves. A guest appearance by Vincent Price as a crazy old archaeologist puts a proper bow on a great Brady trilogy.

If you don't see Hawaii when you think of the Bradys, you probably hear, "Oh, my nose!" "The Subject Was Noses" is one of the classics, as a two-timing Marcia gets smashed in the face by karma in the form of a badly-thrown football. Other than that misfortunate collision, Season Four was a good year for Marcia, who, in her first year in high school began to grow into the young lady that stole many a young boy's heart in the '70s. In one of her more memorable episodes, her own heart was stolen by Dr. Vogler, the hunky dentist in "Love and the Older Man." 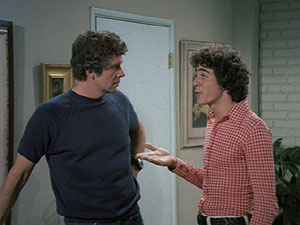 Marcia wasn't the only Brady dating, as Greg found himself a popular guy at school. Of course, his dates aren't easy, as he finds himself grounded in the appropriately titled "Greg Gets Grounded" and then, as a judge of the cheerleading tryouts, he has to choose between Marcia and his girlfriend. As the oldest Brady, he also starts thinking about a career and his own bedroom, both of which lead to wacky outcomes.

Of course, as the middle child, Jan isn't dating anyone, having been stricken with an unfortunate pair of glasses and braces. Thankfully, the focus was taken off of her this time around, as only one episode centers on her, "Jan, the Only Child." Having been miserable forever about her status in the family, she finally gets her wish to be on her own. Being Jan, she's not happy then either.

One of the big themes in this series is the idea of power corrupting, and it continues this season, as Bobby becomes a safety monitor. Pushing the concept to the extreme, Bobby gets under everyone's skin, in school and at home. Cindy learns the same lesson when her head gets too big after winning a spot on a game show. Even Alice gets a bit of a jab when the kids turn on her, when she tells their parents about the bad things they've done.

As cheesy as it may be, the episode from this season that stands out more than the rest is "Amateur Night," another Brady Six performance, though the band goes by the name "The Silver Platters." Thanks to another Jan screw-up, the kids need money fast for their parents' anniversary gift, and enter a talent contest. It might be the stunningly bad costumes or the catchy pop songs, "Sunshine Day" and "Keep On," but this is the epitome of what a Brady Bunch episode should be: pure, innocent goofy fun. 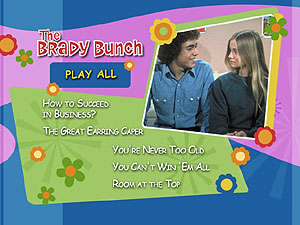 The Discs
An exclusive release for Target, the fourth season of The Brady Bunch hits DVD with a newly-pressed four-disc set of the same content released in 2005, though this time it's packaged in a clear, single-width keepcase with a dual-hubbed tray. In the case is a two-sided cover that has an episode guide on the inside, while the slipcover repeats the stylish new cover art (a big improvement over the original set's) with added embossing and spot-UV coating. The discs feature the same static, full-frame menus as before, which list the episodes and include a play-all feature. There are no subtitles or language options, but the episodes do have closed captioning.

The Quality
No changes here, so these reports are mainly the same:
The full-frame video looks about the same as the previous season, with plenty of grain and obvious dirt and damage throughout. Once again, the level of consistency is disappointing. For the perfect example, check out "How to Succeed in Business." The image quality is so disjointed that some scenes look as good as recent digital cable, while others look like Super 8 home-movie footage that was stored in the sun.

The audio for the series is a Dolby Digital 2.0 presentation of a mono mix, and it sounds really nice, with clear dialogue, score and sound effects. The music during the Silver Platters' performances is particularly good.

The Extras
Aside from a few previews on Disc One, sadly, just as it was in 2005 and just as it was in the previous two sets, no extras grace this season's episodes. A bit of effort to enhance the collections would have been appreciated. 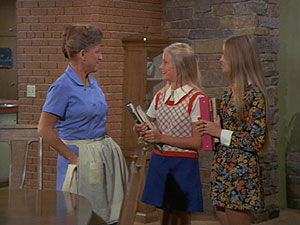 The Bottom Line
The trip to Hawaii, the football in the nose, "Sunshine Day"... the hits just keep on coming in Season Four, the pinnacle of the show. These are the episodes that best represent what the series was all about. The DVDs have the same level of quality we've come to expect from this series, and there are still no extras, so this set lives and dies on the strength of the episodes. In this case, it lives and thrives. If you only want one set of Brady Bunch DVDs in your collection, this is the one, as the episodes are some of the finest in the entire run.