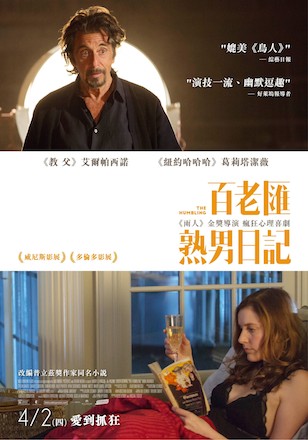 The Humbling is the kind of movie that is far less rewarding to watch than it would have been to work on. A darkly comic drama adapted from a recent Philip Roth novel, which itself got a pretty mixed reaction, the film offers Al Pacino the opportunity to gently mock the acting profession while offering up one of his most nuanced and committed performances since... hmmm... well, probably since the last time he worked with director Barry Levinson on that Jack Kevorkian HBO movie. Levinson, who seems to be on a Soderbergh-style experimental streak these days, directs The Humbling in a fairly muted style that puts the acting front and center, which is both a strength and a weakness. With its focus on a past-his-prime actor who has an increasingly tenuous grip on reality, The Humbling bears more than a passing resemblance to the Academy's recent pick for Best Picture, but where Birdman is all high emotions and eye-catching virtuosity, The Humbling feels more like a sedate, feature-length acting exercise.

Pacino plays Simon Axler, a formerly great stage actor who reacts to his growing lack of talent by grabbing a shotgun and attempting to shoot his own head off. (He later claims to his therapist that he was inspired by Ernest Hemingway in this moment, though he laments that Hemingway must have had longer arms.) So Simon spends a thirty-day cooling-off period in a psychiatric hospital, in which he meets the aforementioned therapist (Dylan Baker) and a semi-delusional rich lady (Nina Arianda) who wants to hire the actor to kill her husband. When Simon returns home, he is visited by a young woman named Pegeen (Greta Gerwig) who is the daughter of some old acting chums. Though Pegeen is a lesbian teaching at a nearby women's college, she admits to having a lifelong crush on Simon. Cue the ill-advised May-December affair.

Levinson peoples the periphery with a lot of welcome faces, such as Dan Hedaya and Dianne Wiest as Pegeen's disapproving parents; Wiest makes a particularly strong impression during her short time onscreen. Kyra Sedgwick and Billy Porter play two of Pegeen's former lovers who take turns lurking around Simon's property, pining for her and haranguing her hallucinating new beau. A surprisingly old-looking Charles Grodin makes a few charming appearances as Simon's agent, constantly prodding him to get back on the stage. In the end, though, the film doesn't have enough good moments to properly serve any of these actors' talents.

In fact, the actor who gets the shortest shrift is Greta Gerwig as Pegeen. When she first arrives, looking slightly tomboyish and wrestling with whether or not to kiss the old man, her presence is electric. She's not just a great performer, she's a movie star. But then the script (credited to old-timer Buck Henry and newcomer Michal Zebede) keeps trying to pigeonhole her into a bunch of "younger woman" behaviors that are trite and uninteresting. Simon takes Pegeen shopping to get her to dress more femininely, and then she never stops shopping for the rest of the film, draining the old man's resources in the process. Inevitably, she gets more distant and starts having other affairs. Her internal life becomes a mystery to the viewer, because the movie is completely uninterested in it. By the end, Pegeen is just a one-dimensional device implemented in the downfall of Simon Axler. The spark of life in Gerwig's eyes only comes back in the inevitable but gloriously messy break-up scene shortly before the climax.

Meanwhile, Pacino is good enough here to keep the film from devolving into a boring, solipsistic mess. He clearly relishes the opportunity to turn this delusional old man into a truly tragic figure and seems content just to explore his slightly cracked headspace. In The Humbling, Pacino's not just a movie star, he's a great performer. It's just a shame that the movie in which he is appearing is neither as focused nor as playful as he is.

The Video:
The AVC-encoded 1080p 2.40:1 image is crisp and clean. The color palette is typically muted, with a tendency toward earthy tones. The night scenes have nice rich blacks while some of the day scenes look a little washed-out. There are a few brief run-ins with digital compression artifacts. Nothing that's too unattractive though.

The Audio:
The Dolby TrueHD 5.1 surround audio mix is clean and legible, with certain instances of palpable ambience. But the movie is pretty light on music or action, so it's mostly just talk-talk-talk up front. I did not sample the included lossy Dolby 2.0 stereo mix, but I wouldn't be surprised if it is not SUCH a significant step down. English SDH and Spanish subtitles are also offered for your reading pleasure.

Special Features:
Just a brief Behind The Scenes featurette (HD, 3:43), featuring interviews with some of the cast and director Barry Levinson. An interesting detail which makes perfect sense is that Pacino was the one who initially bought the rights to the book, because he wanted to play the part, and he was the one who got Levinson involved later.

Final Thoughts:
There are a lot of great little moments in The Humbling, thanks to its incredibly qualified cast. Unfortunately, the whole is less compelling than all those discrete parts. If you have even the slightest curiosity about this film, I say Rent It.