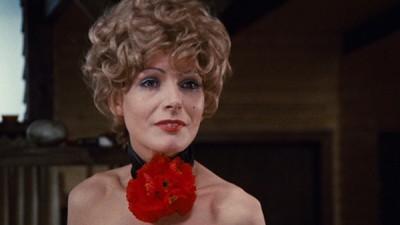 Casting back in my memory, I think I first heard of Rainer Werner Fassbinder at the same time I first heard of Douglas Sirk, back in the late 1990s or so when Martin Scorsese and others were trying to introduce Sirk back into the conversation. So, even though it would take me longer to actually experience the cinema of Fassbinder (I was drawn in by the stories I heard of Berlin Alexanderplatz) than it would Sirk, whom I sought out immediately, the two would remain inextricably linked. Largely because Fassbinder wanted it to be so.

The German director's 1972 film The Bitter Tears of Petra von Kant is his tribute to Sirk, an attempt to adopt some of the same themes as the master of melodrama, to tell a story of women and their concerns, and to do so with the same colorful backdrops. While I'd suggest that the final result might be more aptly described as "Norma Desmond by way of Ingmar Bergman," one can still see the sudsy fingerprints of Sirk all over it. Yet, it's also more than homage: The Bitter Tears of Petra von Kant is very much its own thing.

Fassbinder's film is an adaptation of his own play, and the theatricality of the staging and structure of The Bitter Tears of Petra von Kant would betray that even if the credits did not. (And, again, like the Sirk influence, this is a good thing). The Bitter Tears of Petra von Kant is essentially a story in four acts, plus an epilogue, set in the same space, Petra's apartment. Petra (Margit Carstensen, later seen in Fassbinder's World on a Wire) is a middle-aged fashion designer who has sealed herself off in a claustrophobic world of her own creation. She still works, but mostly from bed, and as we watch, honestly, we only see her longsuffering, silent servant, Marlene (Fassbinder-regular Irm Hermann), actually put brush to paper and design anything.

Within her decadently decorated four walls, Petra receives many guests, including her cousin Sidonie and eventually Sidonie's friend, Karin. (They are played, respectively, by Katrin Schaake and Hanna Schygulla, also regulars in Fassbinder films; in the way he builds a stock company of female actors, one might also draw comparisons with Pedro Almodovar.) It's Karin who throws a spanner in the works. Petra is drawn to her, so in Act Two, she lures the younger woman back to her apartment, and in a case of "who's playing who?" convinces her to stay with her after hearing Karin's sob story about how tough her current living situation is.

Petra's interest in Karin is more than charitable, and by Act Three, the fact that they are lovers is quite obvious, even if it's not explicitly said so out loud. Yet, it's also already over, the parasitic union having run its course for Karin, who has gotten what she wants. Leading to the final act, wherein Petra is despondent and suicidal on her birthday. Enter her college-aged daughter (Eva Mattes), whom she verbally abuses, and her aristocratic mother (Gisela Fackeldey), who clearly still rules the roost despite Petra's many successes, and we see the pattern of three generations of broken women and their dysfunctional understandings of love. Petra lays everything bare, possibly making it clear for the first time for some of the more sheltered viewers in the early-'70s audience, and the melodrama reaches a crescendo.

Fassbinder divides all of these scenarios clearly, inserting a fade to black between and also marking the various sections with different songs, including hits by the Platters and the Walker Bros. Between those fades, he prefers long takes with invisible edits. There are cuts, there are angle changes, but they are never obvious. Once the drama has sucked you in, you'd be hard-pressed to notice or recall editor Thea Eymesz's nips and tucks. Likewise, cinematographer Michael Ballhaus, who later went on to work with Scorsese and Coppola (not to mention Prince), uses the camera merely as a framing device. He doesn't push, he doesn't highlight--rather, his work is in capturing the drama, as well as color and the costuming. Petra as written and as Margit Carstensen plays her, is forceful enough a presence on her own to command the montage without any added help. Well, except for maybe costume designer Maja Lemcke. The woman's moods are telegraphed by her outfits and wigs. When she is seducing Karin, she is like an exotic queen out of some mythological history, all baubles and distractions; when she is being jilted, she is more covered, and her hair is a hard-lined bob; on either end of the movie, when she is in despair, she wears a plain nightgown and no wig at all. The space between is so long, we forget her most honest face before we are reminded of it again at the end. Without the warpaint and the wardrobe, she is vulnerable. At her most naked, she is the most alone. 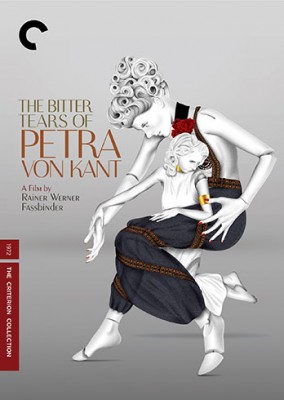 Video:
Criterion's new transfer is taken from a 4K digital restoration overseen by Michael Ballhaus; the 1080p image looks marvelous on disc, with lush colors and a consistent grain that lends to the atmosphere of the film. There are very few marks on the image, nothing too pronounced--though watch out for the optical illusion of the split between panels of the painting on the wall, it sometimes looks like a line running down the frame.

Resolution is appropriately modulated, and detail is fantastic. The costumes and textures, including skin tones, look phenomenal.

The Bitter Tears of Petra von Kant is shown at its original 1.37:1 aspect ratio.

Sound:
The uncompressed mono soundtrack, presented in the original German, is clear and sharp with no distortion, dropouts, or hiss. The English subtitles are unobtrusive and easy to read.

Extras on the disc include new interviews with cinematographer Michael Ballhaus on his own (8 minutes), while elsewhere, most of the major actresses from the film--Carstensen, Mattes, Schaake, and Schygulla--are gathered into a brand-new half-hour documentary called Outsiders. A second documentary, Role Play: Women on Fassbinder, hails from 1992, was made for German television, and runs about an hour.

Film scholar Jane Shattuc, who has written extensively on Fassbinder, also sits down for a talk that is nearly half an hour.

FINAL THOUGHTS:
Highly Recommended. The Bitter Tears of Petra von Kant is at once mysterious and bare, entangling the audience in its extensive drama, which itself is a manifestation of one interior life exposed on a single set. Rainer Werner Fassbender is melding 1950s melodrama with the dark explorations of his European predecessors, most notably Ingmar Bergman, all inspired by and in tribute to the great master of the "women's picture," Douglas Sirk. Centered on a tremendous, deeply felt performance by Margit Carstensen, who plays a lonely, manipulative fashion designer who has locked herself away and, by doing so, draws others into her orbit of despair, The Bitter Tears of Petra von Kant is a most colorful and intimate portrait of heartbreak and self-immolation. 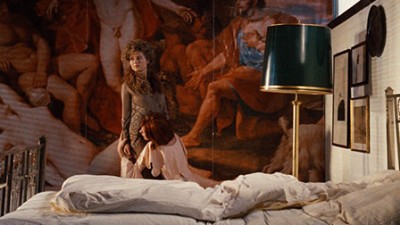