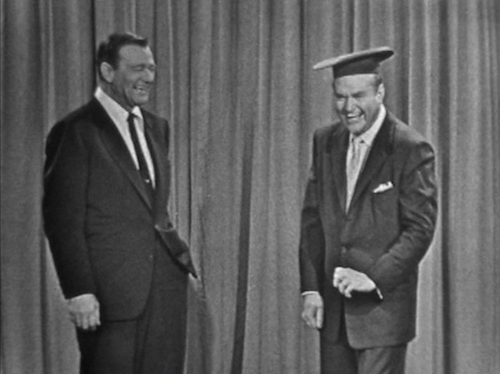 Funnyman Red Skelton headed a comedy-variety show on television for twenty straight years from 1951 to 1971. It was popular enough to remain in the Top 20 of the Nielsen ratings for almost all of that time, and it only got the axe because of the widespread "rural purge" that nixed shows that skewed too old and too... well... rural. Shout! Factory's Timeless Media imprint has been doling out various chunks of episodes from the show over the past few years, including a massive 18-disc set that featured 60+ hourlong episodes from the '60s era of the show called The Collector Edition (2010) and smaller releases like last February's The Lost Episodes. The company is back to thinking big again with this new release, The Early Years: 1951-1955, which features 90 half-hour episodes on 10 discs and also includes a bonus disc with two other episodes and some interesting supplements.

Though Skelton's show was huge for so many years, it has never been big in reruns, so I had no exposure to it before popping in disc one of this set. Immediately, I fell in love. Skelton is the perfect combination of physical and spoken comedian. His upbeat attitude ties together his gifts for snappy patter, silly faces, and funny voices. Add to this his willingness to be self-conscious and break the reality of scenes to comment on them, both within what is scripted and what most certainly must not have been, and Skelton's show becomes a holy grail for someone like me, raised on Abbott & Costello, Buster Keaton, and Monty Python.

This set covers a relatively short, but fairly tumultuous time for The Red Skelton Show. It includes most of the first three seasons of the show and about half of the fourth. Why certain episodes haven't been included is not made clear, but one has to assume that it could be a matter of missing masters or that prevalent bugaboo of home video, difficult music clearances. The shows appear to be intact, running 25 to 29 minutes. In most of the early episodes, Skelton jams a conspicuous plug for the sponsor into the middle of sketches, so those commercials have not been cut, but the other ads are not included.

The first-season episodes included here are probably the best, from opening credits to end. While there are plenty of excellent sketches throughout the set, these specific episodes have a breakneck energy and a recklessness that eventually tapers off. But what an unforgettable charge when it's there! Skelton is pretty much onscreen every minute in these episodes, which kick off with a monologue where he tells jokes, does pantomimes, and plays characters like his son Richard (a transformation he pulls off by putting his hat on upside-down). The episodes then segue into a series of sketches where Skelton may end up playing as many as four of his time-tested cast of characters, including perpetual drunk Willie Lump-Lump, wild-haired moron Clem Kadiddlehopper, punch-drunk boxer Cauliflower McPugg, British broadcaster Lord Beaverhead, hen-pecked husband George Appleby, Texas lawman Deadeye, crooked politician San Fernando Red, and the self-explanatory Weepy Numbskull.

Skelton seems unwilling to let the laughs subside at any point. When a joke bombs, he gets a laugh by bringing attention to that failure, saying whoever wrote that joke is going to be fired or making a comment like, "It's a bad joke, but it's important to the plot." In other words, if the material doesn't do the trick, then he's going to ignore the material. Or if his scene partner does something weird, he'll get a laugh off of bringing attention to that. In a lesser performer's hands, it could seem desperate, but with Skelton, it just feels like he's constantly tuned into what is the potentially funniest thing happening in that moment.

The first season episode, "The Transcontinental," includes one of Skelton's most famous bits (which, like any good bit, he also reprised on the show years later). In it, Willie Lump-Lump's wife has had carpenters tack all the furniture to the walls to make it look like the room has turned sideways while the lush was passed out. Willie wakes up, thinking he is walking on the wall, and in a glorious touch, when he opens the door to the next room, he sees his wife sitting in a sideways chair. 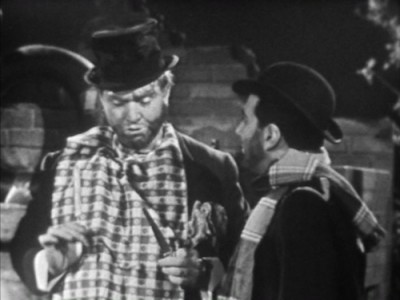 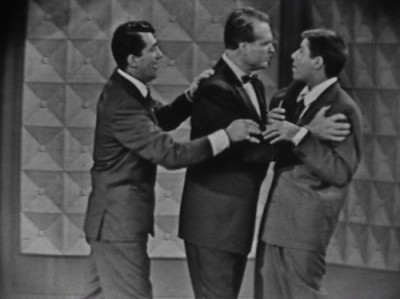 Television seasons lasted an exhausting 39 episodes in those days, and clearly that first season took its toll on Skelton. The second season was no longer shot live, but was recorded in front of an audience on film. Skelton brought in other acts, like singers and dancers, to pad out the show, so he wasn't doing ridiculous quick changes all the time. The show isn't exactly bad during this second season, but it definitely seems to have run out of the steam that super-charged the first year. In the very least, though, this season is valuable to Skelton fans because it introduces what is considered his signature character: the hobo Freddie the Freeloader.

NBC cancelled The Red Skelton Show at the end of the second season, but CBS saw potential for Skelton to turn it around and picked him up. The third season is definitely a return to form. Though there are still musical acts and emcees to relieve the burden of Skelton being onstage for every moment, the show is once again shot live, restoring a good deal of the missing spark. The writing is also a little sharper than the year before. Johnny Carson was in the writing room at this time, and he can be see briefly in this DVD set during a strange digression in a "Prince Valiant" sketch where they parody the Army-McCarthy hearings. (The famed episode where Carson had to fill in for Skelton, after Skelton injured himself in rehearsal, is not in this set nor are any of the other episodes from the Red Skelton Revue iteration of the show.)

The show was rebranded in its fourth season as The NEW Red Skelton Show, and there is distinct difference in these episodes. In a bid to boost the ratings, every episode now has a guest star. Also, instead of scattered sketches and musical acts, the writers try to fashion episode-long storylines to tie everything together. It thankfully doesn't turn the show into a half-assed sitcom, but it does provide each episode with thematic focus. For example, an episode with guest star Peter Lorre is focused on the idea that Lorre has told his agents that he desperately wants to work as a comedian, so the show becomes a series of sketches about Skelton's failed attempts to make that a reality, climaxing in a Charles Addams-esque sketch where Lorre plays Ralph Kramden with a Vampira knock-off as his wife and Skelton playing Ed Norton in a macabre parody of The Honeymooners.

Even without all those other names to prop them up, the value of these shows cannot be overstated. Red Skelton was a genius, a performer's performer whose imagination and timing are wonders to behold. This set captures his landmark TV show at a time when Skelton and his writers and producers were still experimenting with what exactly the show could and should be. And that frequent tinkering and experimenting is the core of what makes Red Skelton fascinating to watch, and what makes his frequent ad-libs and asides better than what dozens of others could have written. 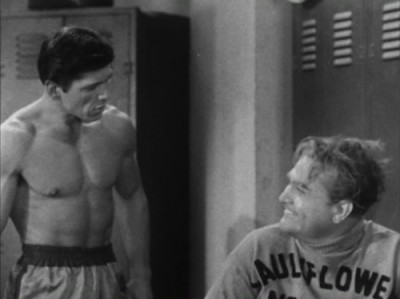 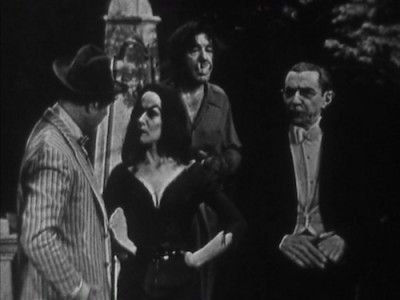 The DVDs
The Red Skelton Show: The Early Years 1951-1955 comes in a box with 6 DVD slim cases inside. The main episodes are on 10 discs in dual-hubbed cases, while the 11th bonus disc has its own case. Unfortunately, these are all cheapo cases, like one would typically find for public domain DVDs in a Family Dollar, so most of the discs had already fallen off the hubs when I opened them up and would not stay put otherwise.

The Video & Audio:
All of these episodes are taken directly from 16mm kinescopes of differing quality. In general, the standard 1.33:1 video and Dolby 2.0 mono audio is middle-of-the-road decent. In some moments, the elements are more beaten up than in others, and certain sections are surprisingly pristine. Considering the age and production circumstances of these shows, this is a completely acceptable and watchable set of transfers.

(1:21:36) - A documentary (undated, but based on the video quality, it looks like it came from the late '90s) that recounts highlights from Red's life and career, starting all the way back with Red meeting Ed Wynn as a small child and concluding with his death in 1997. Skelton's performances from radio, TV, and movies are excerpted, including the full version of Skelton's famous 1969 recitation of the Pledge of Allegiance. Archival interviews with Skelton are also included, in addition to newer talking heads by Skelton's daughter Valentina, Jamie Farr, Mickey Rooney, Kip King, Chanin Hale, and others.

Final Thoughts:
Comedy fans of all ages are bound to love this set. These shows chronicle a powerfully creative time for comedian Red Skelton and lay the groundwork for the decades of comedy still to come. Red's got a pretty wonderful singing voice too. DVD Talk Collector Series. 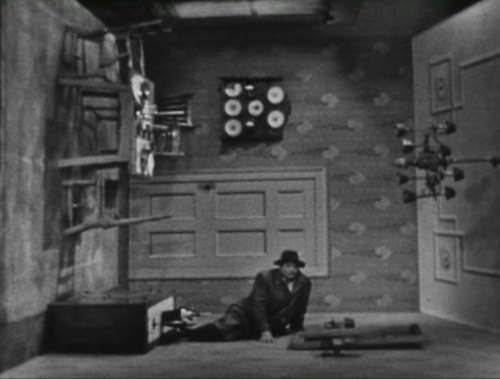