Mulan was one of the most ambitious projects ever taken on by Disney. The studio transformed the Chinese legend of Mulan into a full-fledged Disney production for release across the entire world. The film is one of the most visually striking, entertaining, and memorable of all Disney classics. Mulan also happens to be the 36th Disney animated feature and in my estimation it is one of the best animated films around.

The story centers upon Mulan (voiced to perfection by Ming-Na Wen) as she decides to enter the Imperial Army in China in order to help save her elderly and ill father from going to war to die. Yet Mulan was not able to join the army by her own choice of volunteering herself because of the sexist law that allowed for only men to enlist in battle.

If she had been born as a boy, she could have agreed to take her father's place. Instead, Mulan must dress-up as a man to enlist and protect her father from what she is sure would be certain death. Over her journey she faces many obstacles and becomes one of the most fearless and strong warriors amongst the soldiers. She is also joined by a somewhat hapless, goofy, and charming tiny itty-bitty dragon named Mushu (Eddie Murphy) and a similarly small "lucky" cricket.

The story of the film is one of the best in the Disney canon. Written by Rita Hsiao, Chris Sanders, Phil LaZebnik, Raymond Singer, and Eugenia Bostwick-Singer, the film was a wonderfully creative story that made the legend of Mulan fun for everyone of all ages. It similarly managed to tell the story of a strong, confident, and brave woman who would be willing to fight for what she believes in even as society was trying to push her into following stereotypical gender-oriented roles. This aspect of the film makes Mulan one of the best female Disney characters as she is clearly a character promoting female-empowerment.

Apparently the film received some criticism upon its release for the way it handles this storyline, but I always felt it handled this quite effectively. Mulan is the character who ultimately saves the day and the nation must come to terms with the fact it would not have happened underneath their outdated beliefs. This is a positive attribute of the writing. As much as I love all of the Disney animated classics, Mulan is a character that is particularly strong as a feminist icon in family filmmaking and in animation.

The voice-acting in Mulan is exquisite as Ming-Na Wen brings real depth and emotion to her performance. Eddie Murphy is also spectacular in delivering the comedic chops needed to give the movie an airy "lightness" when need be. The film is often quite serious, but whenever Mushu is on-screen be prepared for comedic fun that the kids (and adults) will enjoy together. The great supporting cast of voice-actors is also convincing, nuanced, and effective in making the whole of the film feel well rounded from the voice-acting department.

Visually, Mulan uses color and style in a way that feels unrepeated in the history of films made by Disney animation. The character designs are superb and they are so well implemented into animation layouts and backgrounds. The production design by Hans Bacher ensured that the animation would retain a epic scope, while art director Ric Sluiter helped the film to feel as organic, beautiful, and complex visually as one would hope to find. The film's animation is something that also stands out for its impressive use of watercolors and a more simple style.

In one animated sequence of particular note for the scale of its ambitions, over 2,000 Hun Warriors attack on a mountain-slope. This sequence was one of the first ever done by the animation studios at Disney with cutting-edge computer-rendered software to make the groundbreaking sequence a possibility. It was one of the most talked about technical achievements associated with the film. Pixar software was also used on the production.

The music played a great part in the film's success too. The songs were memorable and had a wonderful impact on the film. "My Reflection" was one of the most beautiful Disney ballads, and it was both impressive in the feature-film and in the adaptations done for the soundtrack, provided by artists like Christina Aguilera. "True to Your Heart" was another powerful and effective piece that left a great mark on the film. And accompanying the songs was an epic, powerful, and effective score by composer Jerry Goldsmith (Gremlins, Alien).

The film was directed by Disney animators Tony Bancroft and Barry Cook, both of whom had previously worked in the animation department on hits like Aladdin, Beauty and the Beast, and The Lion King. Mulan was their feature-film directorial debut. I'm actually quite surprised to realize just how few additional directing credits they have had following Mulan. Regardless, the exceptional style is something that was achieved with precision by the filmmakers and they were successful in creating a excellent Disney classic. It is one of my favorite animated films and it's an essential effort worth sharing with family and friends over and over again.

Mulan arrives on Blu-ray with a gorgeous 1080p High Definition presentation that is sure to stun. The transfer is one of the best in the catalog of Disney releases and it really shines with great clarity, depth, color reproduction, and a sleek, clean, and modern looking animation style. Viewers will be thrilled by how beautiful the film looks on this release. Presented in the original aspect ratio of 1.66:1, Mulan has never looked better before for home viewing than it does on its high-def release.

The 5.1 English DTS-HD Master Audio lossless surround sound presentation is a great boost in high definition clarity. The songs and score sound tremendous and spring to life beautifully on this release. The dialogue is clean, clear, and easy to understand. The use of the surrounds and bass dynamics also impresses with the uproarious action-packed sequences coming to life with quality immersion.

Subtitles are provided in: English, English SDH (for the deaf and hearing impaired), Dutch, Flemish, Portuguese, Spanish, and French. 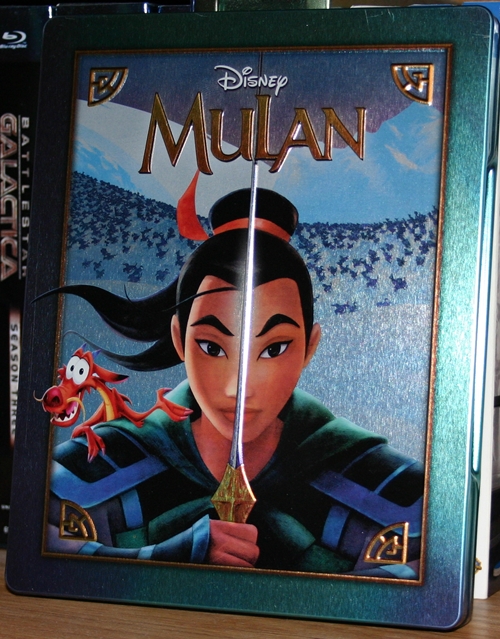 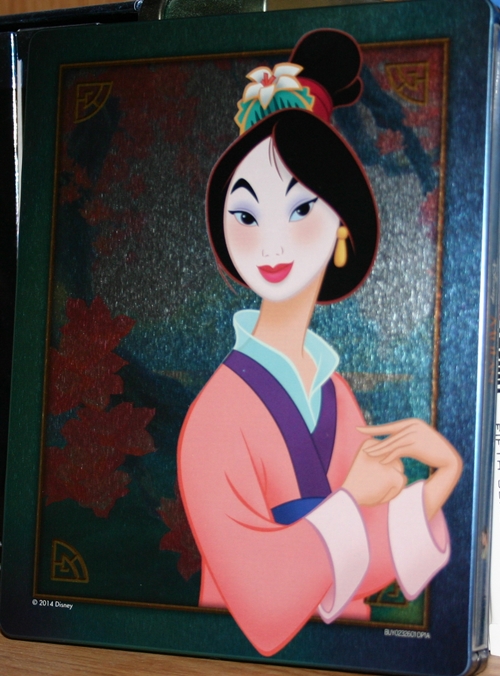 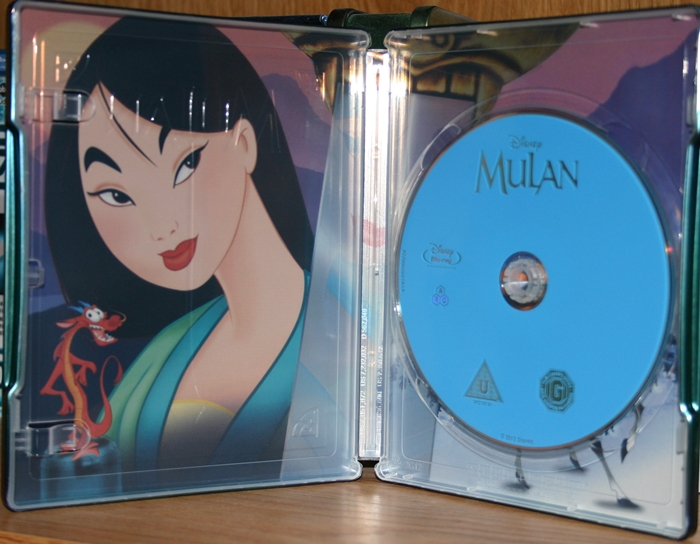 First up is a full length feature audio commentary with directors Tony Bancroft and Barry Cook and producer Pam Coats.

Deleted Scenes (23 min.) showcase deleted moments from the film. A total of seven scenes were cut from the final version. Storyboard versions with temporary music are included to showcase these excised scenes. Co-director Tony Bancroft delivers an introductions for each sequence.

Classic Music and More (28 min.) includes a sampling of music video and music-related extras, featuring: Song of Mulan, Mulan's International Journey, Multi-Language Presentation, and the music videos for I'll Make a Man out of You (as performed in Mandarin by Jackie Chan for the Chinese release), Reflections by Christina Aguilera, Reflejo, a Spanish version by Lucero, and True to Your Heart as performed by Raven and Stevie Wonder separately with two-renditions. The Multi-Language Presentation is especially fun as it demonstrates a segment of a portion of various international dubs from one musical scene, highlighting the language and notating the dialogue spoken on the bottom of the screen. It's truly remarkable to think about as the great emotion is still there and one can't help but wonder how impactful this sort of international process is for kids worldwide. 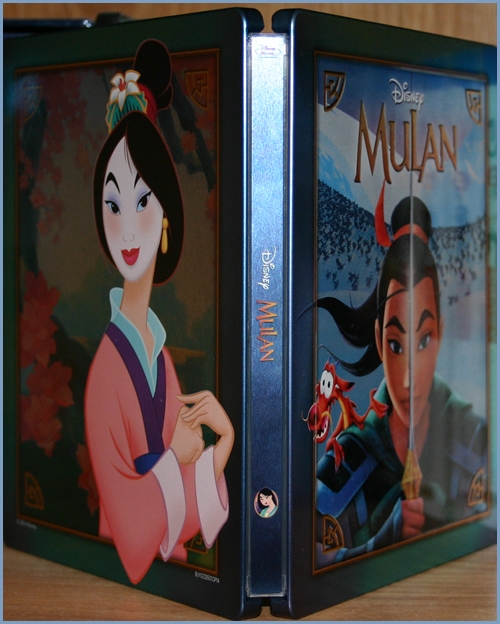 Mulan is one of the absolute best Disney films. It's a magnificent drama and musical all rolled into one. The storytelling is Disney at its finest, the songs will stay with you, and the art is of exceptionally high quality. I cannot imagine being a Disney fan and not loving this absolute masterpiece of a film. The Blu-ray PQ/AQ are superb, there are some good supplements to explore, and the Zavvi exclusive steelbook is absolutely, bar none, one of the best steelbook editions I have ever seen. It's a master-class act itself and is the best edition of the film that is available worldwide and it comes with a stunning finish, embossing, and glossy design that is in the highest rankings of what Disney fans can find. This is a must-own Zavvi exclusive steelbook.