One of the most timeless and beloved Disney animation classics is the 1940 Pinocchio. Produced as the second animated feature film under the supervision and production of Walt Disney, this is one of the best films ever made regardless of the medium of art. The story is one that is quite an interesting and fascinating morale play that is one of the most inventive and memorable in film. Pinocchio is also surprisingly dark, intense, and well-crafted when one compares it to the more modern output seen from all animation studios.

The story begins with the beautiful "When You Wish Upon a Star" song, which is easily one of the greatest achievements of the film and of film music in general. It's an incredible anthem of music that grasps a hold of one's soul and makes a meaningful impact. To anyone who has had dreams - which, as far as I'm concerned should included everyone, the message the film conveys about looking to your dreams and not letting them go is one of the most compelling and beloved aspects of Pinocchio.

The film introduces us to Geppeto, who is an elderly man working as a wood-carver who makes toys for children. Yet one of his greatest life dreams was to have a child of his own, a wish that never came true for him when the film begins its story. He makes one wish: that his favorite, beloved wood doll Pinocchio could be a real boy. Before long, as the night wages on, a blue magic fairy arrives to help grant that wish. She brings the inanimate Pinocchio to life as the moving puppet still made of wood and gives Pinocchio her guided instructions on what he should do to become a real human boy. She tells him to be "brave, truthful, and unselfish", enlists the help of the Jiminy Cricket to serve as his conscious, and fly's away.

Of course, things go terribly wrong right away when Pinocchio runs into a conniving and wickedly horrid fox named "Honest John" who convinces him to ditch his plans for going schooling to instead be the "lead attraction" of his very own puppet show. Pinocchio has a interest in the stardom right away and goes to be a part of the show, where he dances about, singing to the tune of "I've got no strings!" accompanying French can-can girls, and there is success with his number almost immediately. Yet "Honest" John is not so honest and not only doesn't give any earnings to Pinocchio but locks him away to use in his future shows. The Blue Fairy eventually saves the day, but when his own tale as to why he wasn't in school turns out to be untruthful, his nose begins to famously grow, and grow, and grow. It returns to normal but the fairy warns that it was the last time he would be given any favors.

Unfortunately for Pinocchio, trouble once again awaits as he will become tempted to go and see a paradise island for a free luxury vacation at Paradise Island. As it turns out, the island is home to gambling, drinking alcohol, smoking, an and vandalism. Jiminy Cricket becomes frantic at the circumstances surrounding this and Pinocchio's newfound trouble. Jiminy also soon learns that it isn't any ordinary island: it's cursed to turn the young boys going their into literal "jackasses" and turn them into slave-laborers. It becomes up to Jiminy and the help of Geppeto to save Pinocchio before it's too late. On this perilous journey, Geppeto gets Pinocchio off the island (with only an ounce of time to spare as Pinocchio only gets a tail and ears from his transformation) but then it becomes face-off time against a giant blue whale. Of course, the big question of all of this giant perilous journey will be... what Pinnochio learned from his experiences and if he will become a real boy by tale's end. As the film says..."if you wish upon a star, your dreams will come true".

In this day and age of computer animation becoming the norm for all animated productions (and hand-drawn work becoming increasingly rare) it's a wonder to revisit the classic animated films which made the genre and style of filmmaking a success in the first place. Pinocchio was one of animation's earliest masterpieces and it helped to signal in a whole wave of efforts that would be produced by Disney and other studios later on. It has also been named as the greatest animated film of all time according to a 2014 polling conducted with animators and industry employees (working for the likes of Disney and Pixar among others), many of whom cite the film as the most inspiring film ever made for them (many animators say that Pinocchio almost by-itself made them want to be animators and work in the industry). The film was entirely done with traditional  hand drawn animation. To think that the crash of the ocean waves, the behemoth whale, and the nightmarish sequences were done with laborious love and care by hand from Disney animators is a special realization of its own. The art of the animation is such a vital reason for the film's beauty, wonder, and lasting impact.

To think that Disney no longer even has a traditional animation unit in place (after the firing of all remaining traditional animators after the studio executives felt The Princess and the Frog underperformed in the box-office) and closing the traditional animation studio headquarters altogether, so that the focus would entire reside on computer-animation techniques (which, despite using hand-drawn work for some of the planning and computer-done techniques is absolutely, undisputedly a different art form within the animation medium) is downright depressing. What is especially interesting to me about this is that even Pinocchio was a disappointment in the box-office at first (despite enormous critical praise). What if Disney himself, seeing those numbers, had throw in the towel? Yet he did not, and he persevered, another important thematic element inherent in this undisputed masterpiece.

Martin Scorsese recently gave an interview about the topic of the dying use circulating within Hollywood of traditional film replication, and noted " Would anyone dream of telling young artists to throw away their paints and canvases because iPads are so much easier to carry? Of course not." Yet that's exactly what happened to Disney Studios to animators who didn't want work in CG animation or didn't know how. Walt Disney would, in my estimation, find this an entirely heartbreaking thing. Pinocchio was one of his great achievements and to think that the world is shifting away from this specific type of art-form (with traditional techniques and paint) deeply saddens me. If I had a dream to wish upon a star for the animation world, it would be to have the days of hand-drawn animation at Disney Studios to not be a thing relegated only to the past.

Classic Disney productions always tended to involve a lot of artists to create these stories. The directors for Pinocchio included Norman Ferguson, T. Hee, Wilfred Jackson, Jack Kinney, Hamilton Luske, Bill Roberts, and Ben Sharpsteen. The story development, screenplay and concepts were developed by the following writers: Ted Sears, Otto Englander, Webb Smith, William Cottrell, Joseph Sabo, Erdman Penner, and Aurelius Battaglia.  I would like to give a standing ovation to all of these fine artists for the contributions they made to this classic film: amazing work was done in all regards. Pinocchio was a great film for its story, animation, and uniformly brilliant craft. I wish to salute these pioneers of hand-drawn animation. The history pertaining to animation would not exist were it not for artists like them. Without such artists, today's animators may not have had that same dream to "wish upon a star..." and work in the field of animation.

Pinocchio has received a stunning Blu-ray presentation which is beautiful to behold. The bold colors, clean animation (free from specks of dirt, damage, and other print deficiencies), and a general clarity that far exceeds one's expectations for a film over seventy years old is an area where this transfer truly shines. Presented in 1080p with an MPEG-4 AVC encoding in the original theatrical aspect ratio of 1.33:1 full frame, this is one of the best looking release of Disney's animation restorations.

The sound design has been remixed to be expanded to a 7.1 DTS-HD Master Audio presentation. The lossless boost is one that offers an appreciable upgrade over previous editions. The sound quality is not quite as impressive as the picture quality is, though, as the sound can sometimes seem dated and to be lacking in a full range of fidelity for high-definition audio. This is easily noted as being because of the age of the production so it seems unfair to knock the score of the audio too much as it still easily sounds like a quality sound-mix and with vocal clarity that defies it's age as one of film's earliest animated efforts. The surround sound expansion also sounds far more tasteful than one might imagine, and it was mainly used to add some slight envelopment during the music scenes and the uproarious conclusion with the whale. The sound doesn't feel artificial or false within the new mix and that's praise-worthy.

Subtitles are provided in: English, English SDH (for the deaf and hearing impaired), Spanish, Italian, and Dutch. 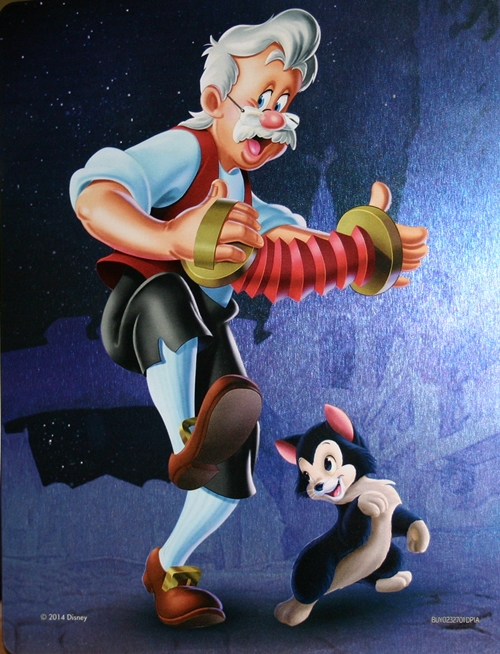 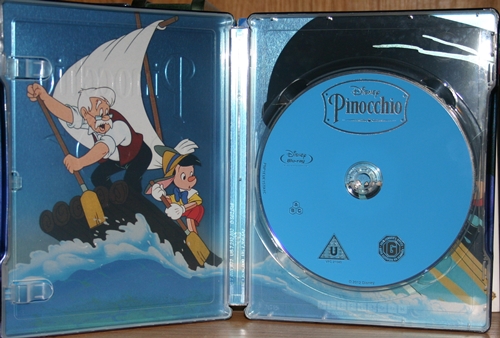 Above:
Steelbook as it was released and will be received.


Below:
Steelbook as it can look if one adds a plastic disc hub and the bonus features disc (sold seperately). 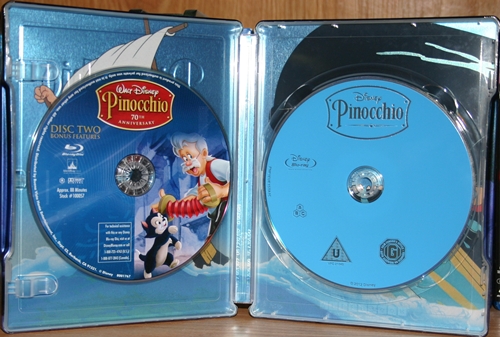 "When You Wish Upon a Star" Music Video (HD, 3 min.)  as performed by Meaghan Jette Martin.

Disney Song Selection allows viewers to jump to a favorite song and watch standalone. Karaoke lyrics accompany these music-only scenes for those who wish to either sing along or follow the lyrics.

Pinocchio's Matter of Facts offers up an assortment of trivia, history, and production notes related to Pinocchio and these can be read while watching the film.

Disney View (where artwork is shown in place of traditional black bars on the left and right of the screen because of the full frame aspect ratio).

Cine-Explore is a Disney PiP commentary track with the hosts from the audio commentary providing video commentary with selections of storyboards, notes, etc. relating to the film. 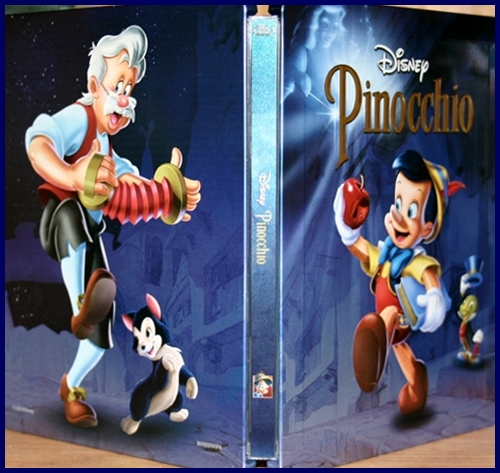 Pinocchio is one of the greatest Disney animation classics. The Blu-ray release is high quality and is worth adding to any film buff's collection. [Please Note that this is one of a few Zavvi Disney steelbooks to be Region B 'locked' so you will need a region free player to play this release's Blu-ray disc (or reside in the United Kingdom).]

Regardless, I feel this edition is worth an overwhelming recommendation. Even if you only have a Region A player, just get the U.S. stateside edition (which has an extra bonus disc) and stick both discs in this edition. I am flabbergasted by the print quality and technical merit of this as something collectible. The steelbook is a work of art.

This Zavvi Exclusive Limited Edition Steelbook is the best designed release for the film released worldwide and it's a treasure, a masterpiece itself as one of the most visually stunning steelbook editions ever released. It's remarkable how beautiful it is and it fits the film perfectly. I prefer it to all of the other collectible releases that were put out around the world for Pinocchio, such as the earlier (and now OOP) Best Buy/Futureshop steelbook edition, and the Wood Box edition. Anyone looking to own Pinocchio with a classy, beautiful package should consider this a essential release.