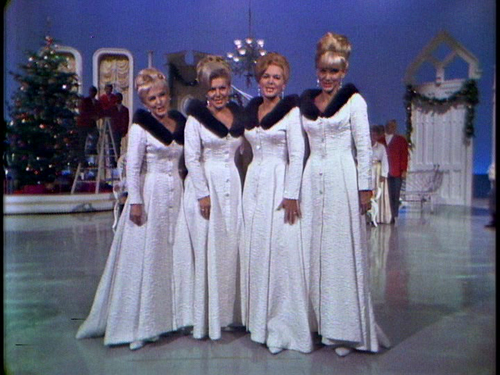 Blonde, cheery, wholesome and prone to breeding like rabbits, the singing King Family were a constant television presence from the mid-1960s through the early '70s. Dorky and un-hip as they could be, their brand of squeaky clean entertainment endears them to a lot of nostalgia hounds to this day (need proof? Look up the King Family's official Facebook and YouTube pages). Come 2014, it came as a pleasant surprise to find those old programs getting revived on DVD in two-disc sets titled The King Family Classic Television Specials Collection. While Volume 1 focused squarely on their non-Christmas specials from 1967-69, Volume 2 is more of a grab-bag of holiday-related stuff the busy brood did during and after their prime. The two-DVD set contains two specials from 1967 (including the sugary, endlessly repeated Christmas with the King Family), a reunion Christmas special (their last) done seven years later, and a sentimental retrospective made for PBS in 2009.

After starting Volume 1 and being amused if utterly confused as to who these people were and how they were related (seriously, there's like 100 of them), by the end of Volume 2 I have become very nearly an expert of the branches of the King family tree (although the several previously unseen cousins and adults in their 1965-66 weekly series makes me believe in the existence of some kind of auxiliary King-stocked warehouse somewhere). The most important thing King newbies need to know is that the show is hosted by The King Sisters, a popular harmony singing quartet with origins going back to the 1930s. At the time these specials were taped, there were a few older King Sisters who retired but stuck around as background - the then-current lineup consisted of the petite, perky Yvonne (who often introduced other relatives' numbers), the robust, torch-singing Alyce, the demure, harmony-vocalizing Luise, and the tall, sexy youngest sis, Marilyn. There were a few King brothers on hand as well, while each of the sisters' husbands contributed their own talents (the only notable one was Luise's spouse, the still-amazing guitarist Alvino Rey). The teenaged King offspring supplied extremely camp yet groovy choreographed song-and-dance numbers, and the youngest kids were around to sing off-key, tell awful jokes, and just stand around looking cute. While the Volume 1 DVD set well-captured their infectious enthusiasm, Volume 2 is particularly special since it contains their most beloved effort: the 1967 Christmas special.

Thanksgiving with the King Family (1967)
Opening with their theme song, "The Sound of Music," the Thanksgiving special positioned the Kings as an outdoorsy, peculiarly Californian white-bread version of the Von Trapps. The show opens with several family members narrating their own Thanksgiving memories as images of a picturesque large rural home are shown. Soon after, the entire family enters singing "Over the River and Through the Woods" as a succession of numbers happy and melancholy (the King patriarch had recently died) are performed in a fresh, outdoor setting. The family's first syndicated hour-long special, Thanksgiving finds the Kings being their usual, enthusiastic selves, if a little awkward as they attempt to settle on a mood and format. If it isn't as strong as the later specials, there are a couple of good numbers showcasing the sisters' buttery harmonies. The family's autumn-toned casual wardrobe is furnished by the folks at Penney's, by the way.

Christmas with the King Family (1967)
The family's 1967 Christmas special pretty much epitomizes their wholesome appeal; unlike the other specials, there are zero wasted or filler segments. The sisters harmonize through "White Christmas" on a gloriously fake studio set; Tina Cole (Yvonne's daughter) sings "I've Got My Love to Keep Me Warm" to her baby; Marilyn does a sultry "My Favorite Things"; Alvino Rey performs some fantastic Exotica accompanied by two of his kids; the cousins dance through an energetic, indescribably strange Bossa Nova-arranged "Santa Claus Is Comin' to Town." It's all charming, even the sincere segment with b-movie actor Bob Clarke (Alyce's husband) recounting the story of Mary and Joseph's pilgrimage to the kids. A memorable highlight came when Alyce's passionate "I'll Be Home for Christmas" was interrupted with a surprise appearance from her son, then stationed overseas in the Army. 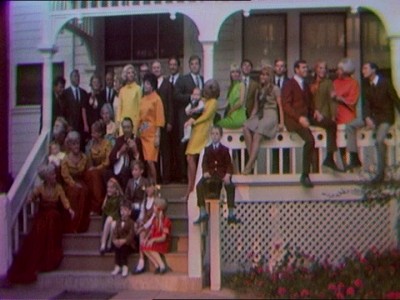 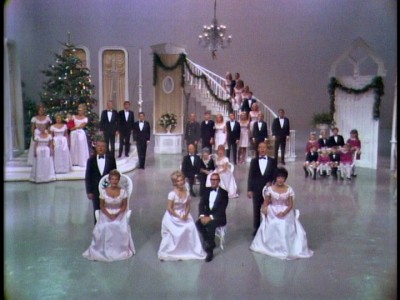 Home for Christmas with the King Family (1974)
The final King Family special, Home for Christmas, brought the entire clan back together after a three-year hiatus. Filled with movement, introspective nostalgia, and even a touch of melancholy, the hour follows the same formula as the '67 special, only this time it's performed on a massive family room set which may remind some of The Brady Bunch. The sisters reprise "White Christmas" accompanied by photos of them in their youth, while the tune "Holiday of Love," performed by the sisters in 1967, is sung by some of the men. A strangely solemn hour interrupted by cheery moments from the younger Kings, this one is best characterized by the moment when Bob nearly tears up while paying tribute to a deceased songwriter friend of the family's. Decked out in lavish fur coats, the Sisters are joined by the Four King Cousins (a polished cabaret act in the '70s) to belt out some carols at New York's Rockefeller Center. Also, Marilyn performs "Have Yourself a Merry Little Christmas" with the original, downbeat lyrics.

Christmas with the King Family Reunion Special (2009)
By 2009, King Family nostalgia was strong enough for the family to have another go at a television special. This time around, instead of music, homilies and hokey song-and-dance numbers, we have the surviving family members sharing warm reminiscences on making the original specials. Along with plenty of clips from the old specials (made redundant on this DVD set), sisters Yvonne and Marilyn are joined by about ten of the grown-up cousins and kids to recall how fortunate they were to spend their holidays in this unusual manner. Although it could have been more in-depth and not focused solely on the Christmas stuff, the family's sincere enthusiasm for performing comes through clearly - 40-plus years later. Yvonne and Marilyn also make room to pay tribute to their friend Alfred Burt, the songwriter who put original carols in his own greeting cards to friends and family. Although admired by fellow musicians, Burt never saw songs like "Caroling, Caroling" gain popularity before dying of lung cancer at the age of 33, in 1954. 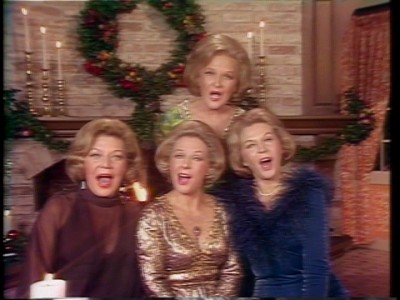 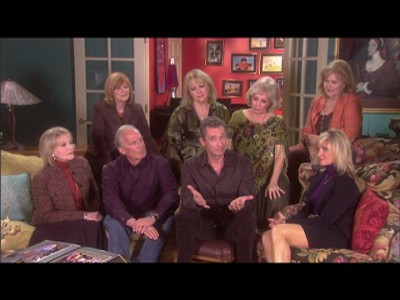 Sourced from aged videotape, the three vintage specials on this set have the usual wobbly image, blurred edges and halo effects seen in other programs from that era. The color is nice, however. All three of the older specials appear to be VHS-grade dupes of the originals. With the 1974 special, the lack of detail is especially bad. The 2009 reunion fares much better, although I noticed that the new interview footage is letterboxed in 4:3 format to match the vintage, full-frame clips.

The mono sound on the older specials tends to get hissy and distorted at times, but it's an adequate sounding mix. The 2009 special also sports a mono soundtrack, suitably more clean sounding than the others. One would think subtitles for the deaf and hearing impaired would be provided on an older-skewing release such as this, but alas they are omitted.

Each disc contains a bonus holiday episode of The King Family Show, their black and white half-hour which aired weekly on ABC in 1965-66. These are both pretty nifty, compact programs bursting with sweet, saccharine musical numbers. It might be my bias towards Alvino Rey speaking, but his "Holiday for Strings" frenetically played on twelve different instruments is the highlight of the entire set. Unlike the Vol. 1 set, this package lacks an informational booklet - what you see on the DVDs is what you get.

Not nearly as cool as stop-motion Rudolph or Charlie Brown bemoaning his tiny tree, A King Family Christmas: The King Family Classic Television Specials Collection, Volume 2 nevertheless revives a vital part of the '60s holiday TV-viewing experience. As with the somewhat superior Volume 1, these specials showcase the Kings as real troupers, spreading non-ironic cheer with enthusiasm and heart. Recommended. 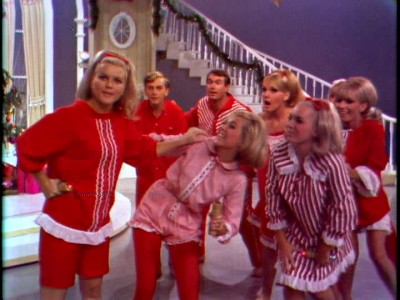 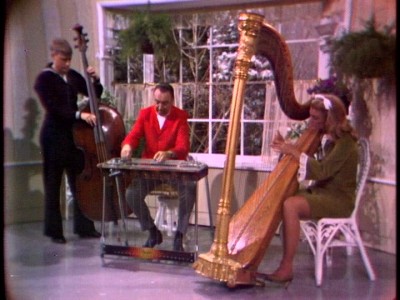 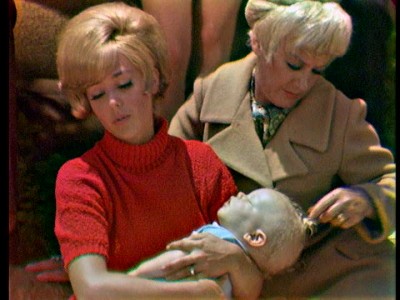 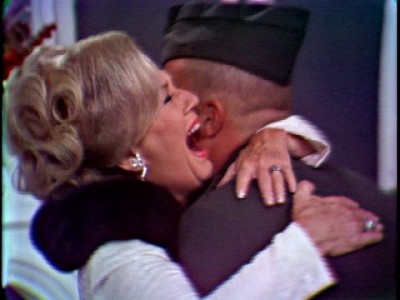 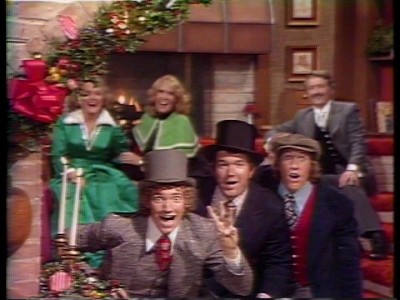 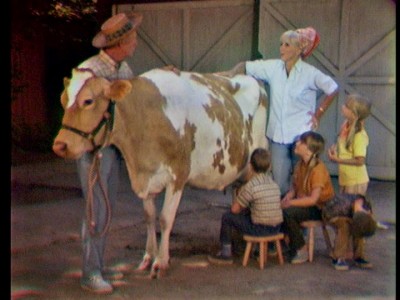