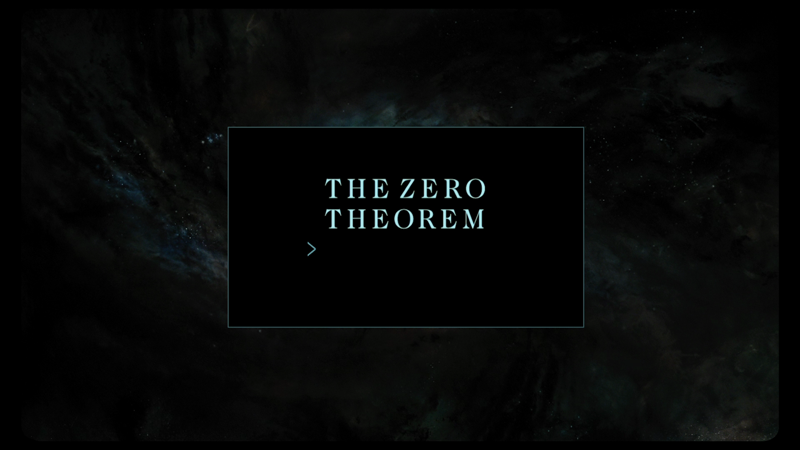 The Movie
One doesn't have to watch more than a few minutes of The Zero Theorem to figure out that it's a film from Terry Gilliam (though you'd be excused if you guessed Luc Besson in a few spots.) This movie, the story of a reclusive data processor chasing the idea of purpose, fits in well with Gilliam's canon, representing the unleashed creativity and smart fable-weaving that marks films like Brazil and Time Bandits. It's also the work of a veteran artist who blends wondrous visuals with outstanding performances to craft a memorable film.

Qohen (the great Christoph Waltz) is an unusual fellow, a data cruncher working for the massive company Mancom (though the details of his work and the company's product are not quite obvious [or even evident.]) Anti-social, somewhat agoraphobic and striking-looking with his bald head, Qohen refers to himself as "we" and would prefer to be in his home, a burnt-out church, in order to wait for a mysterious phone call. Pushing for either disability or the chance to work at home, his request moves through his supervisor (David Thewlis) to the stern Management (Matt Damon), which results in him being given a special project he can complete outside the office: prove the Zero Theorem. What that is however, remains to be seen. 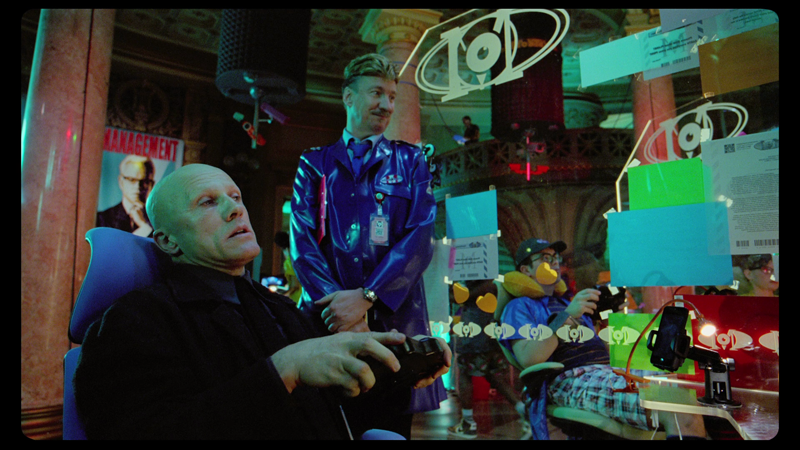 The task is not an easy one. In fact, it may be impossible. Thus, Qohen will need some help. That aid arrives in three forms: a computer psychologist (Tilda Swinton) who helps him with issues that are bothering him, Bainsley, a seductive woman who helps him take his mind off his work (the perfectly cast Melanie Thierry) and Management's own son, teenaged computer intern Bob (Lucas Hedges). Together, they form a support network for Qohen, and help him break out of his shell (but maybe not solve the problem he seeks an answer to, in the face to ever-pressing deadlines.) When the purpose of the theorem is revealed however, and his new-found connections with Bainsley and Bob are affected, Qohen's carefully managed world, controlled down to the flavors in his food, comes unraveled.

Though The Zero Theorem is full of high-minded ponderings and cryptics elements and visuals, in the end, the experience and aesthetics are the key and Gilliam creates a world that's both dramatically different from our own, a futuristic near-dystopia, and completely relatable, with everyday life being bombarded with intrusive advertising and everyone focused on their personal screens, living out life through avatars and online experiences. It's also a world inhabited by a unique (and unique-looking) cast of characters, from the sexy, yet sweet Bainsley to the odd-looking clones and Qohen himself. Waltz is wonderfully weird and alien, yet utterly affecting as he grabs your attention from the word go. The same goes for Thierry and Thewlis, along with the supporting cast, as Damon and Swinton are particularly entertaining and Hedges puts in one of the best naive teen turns since early River Phoenix.

But as said before, this is Gilliam's show and his signature is all over the movie, with dutch angles, strange close-ups, elaborately unusual set designs and a general sense of heightened artificiality that reminds you that this isn't reality. This is a story of another world, where anything can and will happen, from outer space meditation to virtual reality trysts and everything in between. Gilliam breaks down all borders, and the freedom he establishes in their absence is what makes The Zero Theorem so interesting. It's the sexiest, best-looking philosophy term paper you've ever watched. 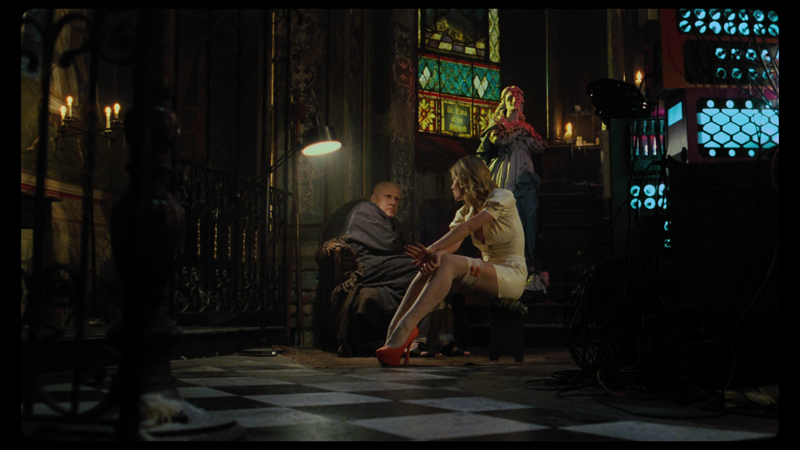 The Disc
The Zero Theorem arrives on one Blu-ray,packed into a standard Blu-ray keepcase, which is inside a slipcover that repeats the cover art, however it sports a matte foil finish that's rather impressive. The evocative animated menus offer a choice to watch the film, select scenes, adjust the set-up and check out the special features. Audio options include English 5.1 DTS-HD Master Audio and Dolby Digital 2.0 tracks, while English subtitles are also available.

The Quality
The 1080p, AVC-encoded transfer is a bit of a throwback, with a rounded-off image sporting a thick black border, often displaying heavy grain (especially during scenes inside Qohen's abode.) This lends the film a mix of artifice and genuineness that works well in establishing the film's tone. The grain also stands in stark contrast with the hypersmooth nature of the VR world Qohen escapes to, where some of the film's most gorgeous moments take place (along with the stunning outer space scenes.) Color is consistently impressive (an important key in the look Gilliam has created) and the level of fine detail is quite high, helping show off the unique textures of the costumes and the intriguing church set. There are no obvious issues with digital distractions, as the film looks uniformly clean and crisp.

The DTS-HD Master Audio 5.1 track offered here is sufficiently active to reproduce the experience of Qohen's life, with the surrounds delivering frequent atmospherics (his few trips into the outside world result in a very active soundstage) while supporting the score and soundtrack songs, particularly during an early party scene and the VR moments. The low-end doesn't have any standout experiences, but it adds some depth to the proceedings. Overall, everything is crisp, even when things get busy aurally.

The Extras
The extras are made up of a series of four featurettes, which play consecutively when you select one. First up is the 18:29 "Behind the Scenes," which uses interviews with many of the cast and crew (though Damon and Thierry are not heard from) and footage from the set to explore the various aspects of the film. It's an excellent overview of how the movie came together.

The remainder of the featurettes go into more depth on the elements reviewed in the overview. "Visual Effects" (6:42) looks at the design of the CG in the film, as developed from the script, especially the way Qohen's work is portrayed in the film, while "Sets" (18:17) explores the sets (natch), including scouting in Romania and the construction of the church set, which is covered in impressive depth. The final, and largest of the featurettes, looks at the costumes, (28:38), with interviews and sketches that explain how decisions were made, including the choice of materials, which was a large part of the look.

Wrapping things up is the film's trailer (2:00) which does a fine job of selling the film's attributes. 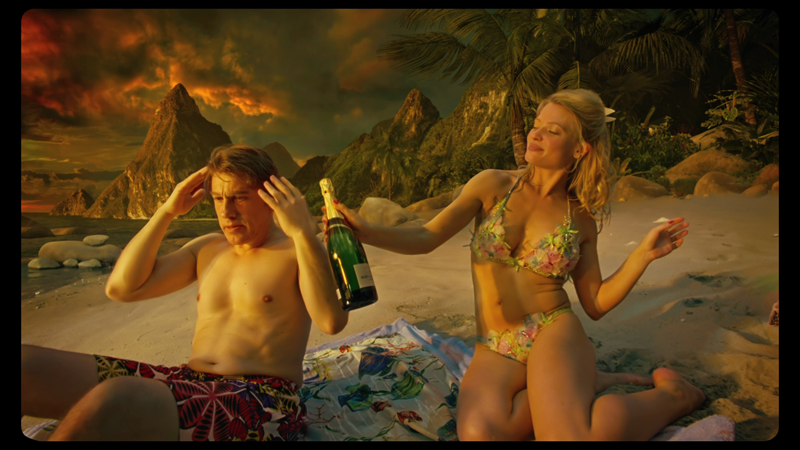 The Bottom Line
The Zero Theorem is definitely going to divide audiences, with the portion having a positive experience being made up mainly of Gilliam fans, as this is more of the same kind of artistry he is well-known for. For others, the oddity and density of the plot may be too much to overcome. But put in the work and the film rewards with a thoughtful, visually-impressive experience. The Blu-ray is also impressive, with a solid presentation and extras that offer a good look behind the scenes, to see how Gilliam accomplished such feats on the cheap. If you like films like Brazil, or even just the more cerebral elements of The Matrix, you might find something to like in this film as well. At the least, it's undeniably beautiful.