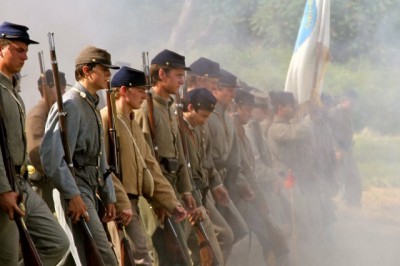 I have laid out in front of me an illustrated atlas of the Civil War. I got it when was I a teenager to supplement my high school history classes. I've always loved history, mostly medieval, but for some reason those Civil War lessons sophomore year really piqued my interest. I couldn't get enough battle information, maps, participant profiles, timelines, and of course informational media; video games, books, documentaries, and dramas. There isn't a shortage of Civil War movies, so I must not be the only one who will eat up the genre no matter the quality. It's a time period that speaks to us, a war on our soil against ourselves, a well-documented multi-year event that still captures the attention of so many. So it's hard to separate my interests, as a Civil War buff and a film critic; I'm both at the same time, even when the two don't mesh. And that's exactly what happened here with Field of Lost Shoes. It's a dramatized history lesson that brings an important little-known battle to life, but it's also not a very good movie. 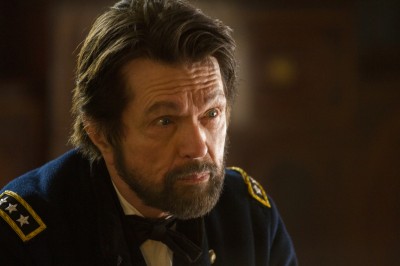 In this true story of the American Civil War, we will meet a group of boys who will have a hand in affecting the course of history. In 1864, the Virginia Military Institute (VMI) was a training ground for Confederate soldiers. The finest lads in the land studied to become heroes and leaders, taught to love their country and to protect their families. A small group of friends will develop bonds that will see them through even the darkest of hours. John Wise, the son of a former governor, the leader of the gang. Sam Atwill, handsome and unsure of the merit of this war. Garland Jefferson, a descendant of Thomas Jefferson himself, the closest thing to aristocracy the land has. Moses Ezekial, a Jew but a Southerner, an artist who just wants to outlive this conflict. Robert, Jack, Duck; all young men who see the South as their country and their friends as their family.

These boys will soon have to grow up, because war is upon them. President Abraham Lincoln has just named Ulysses S. Grant as his commander, allowing this "butcher" to turn the Federal army into a relentless and unemotional foe. The first mission; to destroy the Shenandoah valley and with it the breadbasket of the Rebel populace. Take the valley, cut of the supply of food, protect Washington D.C., flank Lee; these are Grant's objectives. He puts the incompetent General Sigel in charge, with the trusted Captain DuPont as his second in command, and orders him to march south. But Lee knows the vitality of this valley, sending General Breckinridge to protect it. The two forces are set to clash, the Union army with greater number and firepower, the Confederate army fighting for their very way of life. With reinforcements questionable, Breckinridge does what he must and calls upon the nearby VMI to supply him with a reserve of "troops". Two hundred cadets set out, including the group of friends, knowing that not all will return. 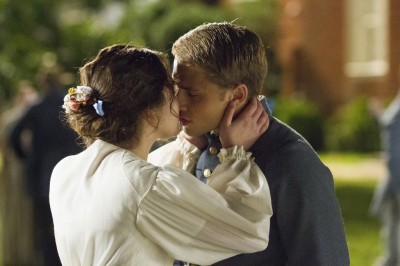 You can't go too wrong basing a movie on a true story from the Civil Wat. Especially when that story involves emotional young men who truly did give their all for what they saw as their country. This far after the war and regardless of how you feel toward either side, stories like this are pretty heart-wrenching, knowing that so many died in a fight for ideals. And so many of those who died were so young, often with relatives and friends across the battle lines, fighting near home towns with newspaper journalists sitting on nearby hills taking notes & pictures. It's a stirring era that makes for good cinema, even for those who claim not to be huge fans of American history; money talks and there's plenty to be made with even a mediocre Civil War film. Here, the story is powerful & true, the historical significance is pushed heavily, and the fact that VMI still honors those who fell at the Battle of New Market speaks volumes about not only the importance of the fight, but of the importance of the fighters.

Now I've closed my atlas and am ready to judge this film as a film. Which is sad really, since it is a good story but not a good movie. The content is there, the drama exists, the plot was written 150 years ago, but you still have to have believable actors present honest emotion, and that's where it failed. The young cadets were all awful actors. They were cheesy, unbelievable, comic at times, often unlikeable, had bad accents, and basically seemed out of place. It was clear in every scene that actors were pretending to be in the Civil War, including in the obviously reenacted-in-a-field-by-your-weird-Uncle-Fred parts. There wasn't a high quality moment in the film, only bad acting with brief moments of forced empathy. I mentioned that the boys were bad, but the adults weren't much better. A boring Lincoln, an out-of-place Tom Skerritt playing Grant, David Arquette, who I've always thought was too strange to be famous. The only bright spot was Jason Isaacs playing a non-villain for once, but even that was ruined by him sitting down with the VMI guys and letting the filmmakers turn each one of them into a ridiculous stereotype. This film, seen from a historic perspective, was a good way to bring an important moment to life, to dramatize a significant event. But as a film critic, I can't call it anything near good cinema. 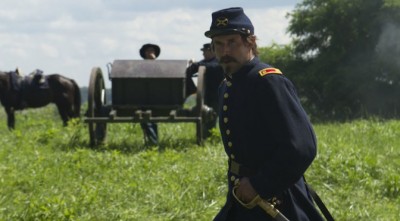 Video: With an aspect ratio of 1.77:1, the video was probably the high point of the film. The costumes, the landscape, the Southern homes, the Rebel soldiers, VMI; everything was presented in rich colors and nice detail. The picture quality was spot on, with bright colors and crisp shots, delivering a strong visual if nothing else.

Audio: The DVD was done in Dolby Digital 5.1, with no audio options. The sound quality was also strong, with a nice use of music and dialogue, with a nice balance and clarity.

Extras: There are a few extras on the disc. A Behind the Scenes portion, the Virginia Military Institute New Market Oath Ceremony, and a trailer for the film. 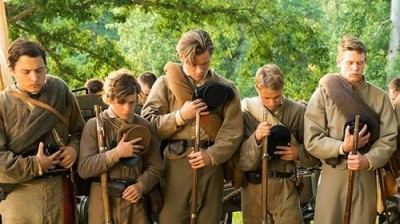 Rent It. I'm torn between recommending the film to those interested in the historic basis of the plot and telling everyone to just stay away. If you're looking for a little action, a little sap, a true story, a cheesy message, well then this is the film for you. But don't expect high quality acting or direction, because in those areas Field of Lost Shoes fails. The video is eye-catching, the audio is solid, and the extras are . This isn't Gettysburg or Glory; it's a much smaller-scale film, and honestly a much poorer.