Cohen Film Collection // PG-13 // October 21, 2014
List Price: $34.98 [Buy now and save at Amazon]
Review by Stuart Galbraith IV | posted November 16, 2014 | E-mail the Author
Le Chef (2012), a French comedy (with Spanish co-financing) starring Jean Reno and Michaël Youn, is even more completely predictable than Paris-Manhattan, another French comedy, also from 2012, that I recently reviewed here. I knew what I was getting myself into, having seen Le Chef's trailer on an earlier Cohen Media Group release. One can easily glean the entire plot from that preview, but the movie goes out of its way to not offer up any surprises at all. Nonetheless, I thought it might be mildly entertaining despite this, and so it is. While it's not even as good as Paris-Manhattan, Le Chef does provide an amiable if at times cartoony behind-the-scenes look at the upper echelons of Parisian haute cuisine. 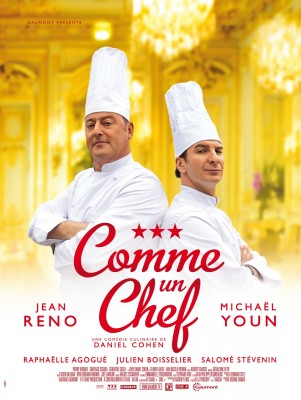 Originally released as Comme un chef ("As a Chef..."), the movie casts Michaël Youn as Jacky Bonnot, a disciple of legendary chef and television personality Alexandre Lagarde (Jean Reno). Jacky, however, is unable to hold onto a job, causing friction in his relationship with six-months-pregnant girlfriend Béatrice (Raphaëlle Agogué). Jacky as a character is misconceived: his passion for good food overrides all common sense. He unthinkingly imposes his exacting tastes without considering the consequences, going over his bosses' heads and forcing dishes on customers they don't want. Eventually, desperate for employment, he lands a six-month contract painting doors and windows at a retirement community. Alexandre, however, stumbles upon this raw, untamed talent, offering him an unpaid apprenticeship. Jacky accepts without telling Béatrice.

Alexandre, meanwhile, has his own problems. His restaurant group's CEO, Stanislas Matter (Julien Boisselier), the son of Alexandre's retired business partner, regards Alexandre as past his prime. Matter is determined to reduce costs and imposes trendy, deconstructivist "molecular" cuisine for Alexandre's upcoming spring menu. The veteran chef unhappily goes along with this plan for a while, allowing Jacky to bring in a Spanish chef-chemist, Juan (Santiago Segura), as an adviser, who quickly turns Alexandre's kitchen into something resembling Frankenstein's laboratory.

Further, Matter threatens to take away Alexandre's business and luxurious apartment should his restaurant's rating drop a single star. Matter actually hopes this happens so that he can bring in pompous molecular cuisine master Cyril Boss (James Gérard). Elsewhere, Alexandre's adult daughter, Amandine (Salomé Stévenin) introduces more stress, she insisting he be present when she defends her thesis before a graduate school committee.

Le Chef is completely predictable from start to finish, if harmlessly so. There are a few nice touches, such as the Greek Chorus-type retirement community cooks (Serge Larivière, Issa Doumbia, and Bun-hay Mean) who end up assisting the pair at a critical point in the story. But mostly it's a by-the-numbers comedy that's occasionally too broad to be credible even on its own terms. One scene particularly has Alexandre and Jacky disguised as a samurai-like diplomat and his geisha-like wife, respectively, to steal ideas from Boss's pretentious eatery. The sequence seems written to acknowledge Jean Reno's huge and lasting popularity in Japan, but it's outrageously unbelievable, more in keeping with Lucille Ball and Vivian Vance's antics on I Love Lucy than a contemporary French film. (In his disguise, Jacky bears an uncanny resemblance to Madame, the late Wayland Flowers's ventriloquist's dummy.)

Indeed, the movie seems carefully calculated to appeal to a non-French audience, capitalizing as it does on French stereotypes (excitable French chefs, exotic French food, etc.). Even its final scene prominently features the Eiffel Tower in the background.

The molecular cuisine is so absurdly unappetizing, bizarre, and depressingly "trendy" that while watching the film I wasn't sure whether it was a real phenomenon or invented for the film. But, lo and behold, it actually exists, with the Spanish consultant seen in the movie apparently based on real-life innovator Ferran Adrià. It looks positively vomitus.

Le Chef also seems patterned after Juzo Itami's Tampopo (1985), a similarly passionate comedy about food and cooking, in this case focusing on ramen. Itami's movie helped popularize Japanese food in America and was a much better comedy overall, having two important components that Le Chef lacks. First, ramen is eminently relatable, even to Western audiences, as it's basically a simple, cheap noodle soup. The grand cuisine of Le Chef looks delicious, but it's harder for a general audiences to relate to, and its impact is lessened because director and co-writer Daniel Cohen never stays with any one dish very long.

Tampopo also had the advantage of charming Nobuko Miyamoto in the lead. She created an immensely appealing character audiences could warm up to. Here, Youn's character comes off as pig-headed and selfish most of the time, while Reno's is superficially charming but world-weary and somewhat aloof. There's also a whiff of pretentiousness to Le Chef itself. In one early scene, Jacky prepares a menu far too fancy for the working-class customers anxious to grab a quick burger and order of fries. Jacky finds their hoi polloi needs exasperating, they regard him as a pretentious "faggot," and that's pretty typical of the film's attempt at humor.

Le chef was shot digitally, and presented in 2.35:1 ‘scope format. The image and transfer are up to contemporary standards. The 5.1 DTS-HD Master Audio, in French with good English subtitles, isn't aggressive in any way but fits the film well enough. (A Dolby Digital 5.1 track is also offered.)

Supplements include the usual stuff, all in high-def: deleted scenes, a blooper reel, a "Two Chefs" featurette, and trailer.

Le Chef is one of those movies where the viewer can anticipate the entire storyline within the first few minutes. Nothing that eventually happens is original or surprising, but neither is it offensively stupid and, actually, overall it is very modestly entertaining. In short, a tepid, borderline recommendation. Rent It.