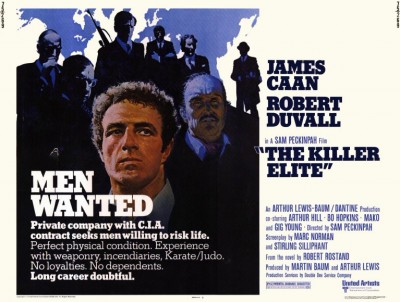 Sam Peckinpah's career was on the wane when he made 1975's The Killer Elite, a studio contract picture about professional contract killers. Think about that for a second. There's a satisfying synergy there.

Reportedly, Peckinpah was brought onto the film by the head of the studio to prove that the old dog still had some fight in him. The resultant movie proves him right, at once fitting in with the status quo of mid-1970s action pictures but with the right kind of touches to make it feel like a Peckinpah movie. There's plenty of male bonding and slow-motion violence, of course. There's also a coherent narrative and, funnily enough, ninjas.

That's right, ninjas. Albeit not very good ones. When a lady ninja dons her black mask to skulk off into the night and use her powers of invisibility...well, let's just say, everyone can see her.

James Caan and Robert Duvall star in The Killer Elite as Mike and George, joint operatives at a private agency that hires out mercenaries for delicate intelligence ops and whatever other wetwork the C.I.A. and the like don't feel comfortable handling on their own. While out on a security detail, George pulls a double-cross and shoots Mike in the elbow and knee, his intention to spare the man's life but take him out of the game. Indeed, everyone counts Mike out. The company sets him up for retirement, the doctors give him prognosis negative...but he insists he can get enough mobility back to be useful.

And so begins a harrowing physical therapy regimen, with Mike going at it harder than anyone would be expected to, proving he is the man everyone always believed him to be. Coincidentally, as things for him get better, George re-emerges to be a thorn in the company's side. A Chinese politician (Mako) is coming to the states and needs protection. With George on the other end of the rifle, looking to take the diplomat out, the company turns to the man who knows their foe the best. Mike puts together a small team of three: a mouthy driver with guts (Rocky's Burt Young) and a squirrelly sniper (Bo Hopkins, The Wild Bunch).

From here, The Killer Elite is a straightforward, somewhat predictable action picture. Mike and his crew head into San Francisco's Chinatown to extract the target, are pursued by George, are double-crossed again, and ultimately have their showdown. While the script by Marc Norman (Oklahoma Crude) and Stirling Silliphant (In the Heat of the Night) isn't going to win any awards for innovation or originality, it strikes a pleasant balance between efficient plotting and the kind of loose-limbed digressions that add so much character to 1970s American cinema. Caan and Duvall are an excellent pair, yucking it up with a natural camaraderie in the earlier scenes, and then translating that into a respectful rivalry in the later tussles. Caan is at his most natural and charismatic here, bringing a vulnerability to his usual tough guy routine, the broken macho man determined to prove everyone wrong.

Peckinpah eases back on the throttle a little bit. The hard-charging director reportedly cut the blood in The Killer Elite to avoid an R rating, causing one to wonder how he snuck the bare breasts at the San Francisco brothel/sex show past the MPAA to keep his PG. The director makes great use of his setting, moving from the underbelly of Chinatown to the industrial ports down on the waterfront. There is also one absurd scene on a hillside by the Golden Gate Bridge where Hopkins' character is just hanging out and shooting his rifle, like one does. It makes for a pretty great backdrop when he and Caan meet for the first time.

All in all, The Killer Elite is a satisfying mid-level genre picture constructed with an upper-level skill. Not Peckinpah's best or even his most memorable, but a respectable statement of intent from a filmmaker who still had something to prove.

Sound:
The original English soundtrack is mixed as 1.0 DTS-HD Master Audio track and sounds really good. The sound is clear, with a good division between music and dialogue. I didn't hear any glitches or distortion.

Extras:
In addition to the usual printed booklet with liner notes, The Killer Elite has two alternate audio tracks: a full-length commentary from three film experts (Paul Seydor, Garner Simmons, and Nick Redman), and an isolated score, the last collaboration between composer Jerry Fielding and director Sam Peckinpah. There is also nearly half-an-hour excerpted from a longer Peckinpah documentary, titled here "Passion and Poetry: Sam's Killer Elite," edited to give focus to the movie at hand.

Other extras focus heavily on the promotion of the film, giving us a gallery of advertising materials, the original theatrical trailer, and television and radio commercials.

The best bonus here is not related to The Killer Elite at all, but instead is a long-unavailable 1966 television production that Peckinpah wrote and directed. Noon Wine is an adaptation of a Katherine Anne Porter novel. The hour-long program comes from the anthology series "ABC Stage 67," and features the powerhouse cast of Jason Robards and Olivia de Havilland. Robards plays a farmer and father of two, de Havilland his ailing wife. When a Swedish drifter (Per Oscarsson) comes by looking for work, the farmer gives him a job. The new man eventually settles into being a part of the family, but trouble arrives in the form of another man (Theodore Bickel) hunting the Swede, who allegedly suffers from mental illness. The famer defends his friend, kills the visitor, and spends the rest of the film trying to justify his actions, to himself and every one else. While Noon Wine doesn't otherwise resemble an average Peckinpah production, this theme of one man trying to do what's right, only to be confronted by his own violent nature, fits right in with much of the filmmaker's oeuvre.

Seydor, Simmons, and Redman have recorded a commentary for Noon Wine, as well.

FINAL THOUGHTS:
Highly Recommended. Though maybe not the best known or even the highest quality of Sam Peckinpah's output, The Killing Season proves to be an entertaining genre exercise, showing the irascible filmmaker could fit into a studio system, play nice, and still come out the other side as his own man. Anchored by fantastic performances from James Caan and Robert Duvall, this tale of two contract assassins who go from being partners to arch enemies is an entertaining action picture that exemplifies the look and feel of 1970s American cinema.