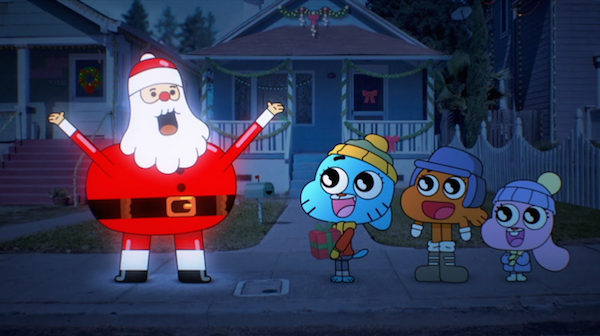 In honor of the holiday season, the fine folks at Cartoon Network have dutifully slapped together a budget-priced collection of 11-minute cartoons, and some of them even have something to do with Christmas! Granted, the two shows on Cartoon Network: Holiday Collection that have absolutely nothing to with Christmas are labeled as "bonus episodes," and bonus content is always welcome. But if you select "play all" from the DVD menu, these non-holiday shows appear as part of the main program. So I am going to treat them as such. 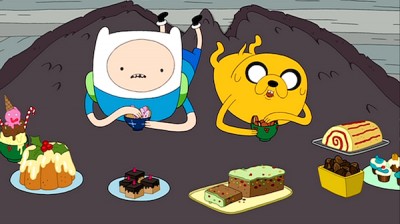 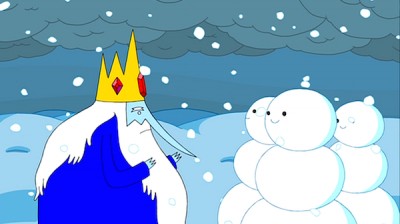 First up, we have the Adventure Time double-episode, "Holly Jolly Secrets, Part 1 & 2" (

). Taken from the show's third season, which has already been released on DVD and Blu-ray (read DVD Talk's review here), "Holly Jolly Secrets" is more of an admirable conceptual exercise than a rewarding narrative. Since this comic fantasy show is set in the Land of Ooo and not in our world, the writers have decided to come up with the origin story of a Christmas-like celebration for its characters to commemorate. But, in a move that is easier to appreciate than to actually enjoy, they intentionally delay getting to the point for nearly twenty minutes of their twenty-two minute story; one fourth-wall-breaking joke has a chyron appear onscreen during part 2, reminding us that this is the Christmas special, even though nothing Christmas-y has happened to this point.

The story in a nutshell... Adventure buddies Finn the Human and Jake the Dog discover a suitcase full of VHS tapes, and they decide to have a secret viewing party, since their portable computer buddy BMO can play the tapes from his butt (don't ask). The villainous Ice King finds out about the party and wants to join in. This is no good because it turns out that the tapes are old video diaries belonging to the Ice King (which mostly document his difficult relationship with Gunter the Penguin). Finn and Jake figure there must be secret information on the tapes if the Ice King dumped them and now wants them back so badly -- Ice King eventually enlists an army of snowmen to help him break into Finn and Jake's home -- but it just turns out to be tape after tape of dumb home movies. There is a really nice surprise at the end of this story, and one that enriches our understanding of the characters -- especially the Ice King -- but I don't know that it was worth the prolonged home-movie-viewing bait-and-switch. 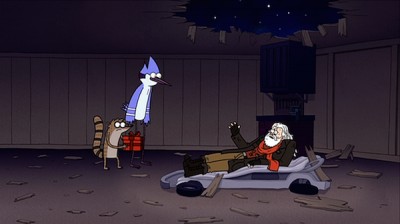 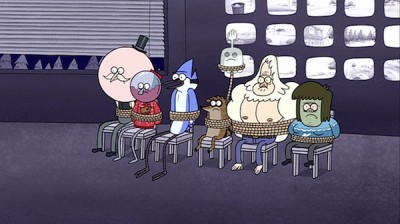 Next, we have the true gem in this collection, Regular Show's "The Christmas Special" (

). Like "Holly Jolly Secrets," this episode is also double-length, but it is not split into two discrete parts. The extra time allows the episode to develop an elaborate, truly entertaining adventure that taps into the writers' love for '80s Amblin Entertainment productions. Slacker heroes Mordecai the bluejay and Rigby the raccoon are charged with saving Christmas by Santa himself (voiced by guest star Ed Asner). One of the elves has created a gift box that gives the person who looks into it anything they want, but also creates the unintentional side-effect of tapping into that person's worst and most selfish instincts. Santa tries to destroy the box, but is shot by the elf in question (voiced by guest star Thomas Haden Church) during the episode's action-movie-style opening (don't worry, kids, Regular Show doesn't kill Santa). Mordecai and Rigby come upon the wounded Santa who tells them to destroy the box. They enlist their coworkers, and the adventure begins.

What follows is a mash-up of The Goonies and the Indiana Jones movies, in which each member of the team must dodge a booby trap or solve a riddle to get closer to the giant lava pit into which they intend to drop the cursed box. Unlike "Holly Jolly Secrets," "The Christmas Special" manages to do what a typical episode of Regular Show does well -- creating funny, imaginative adventures out of the odds and ends of pop culture's past -- while also crafting something that could reasonably be revisited every year as a holiday TV staple.

Adventure Time rejected holiday-special tropes outright, while Regular Show molded them to its own purposes. The next show pretty much just decided to go with the flow. 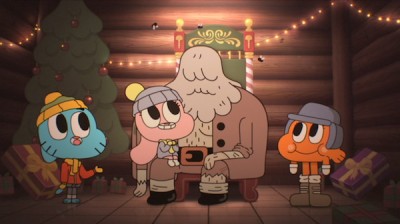 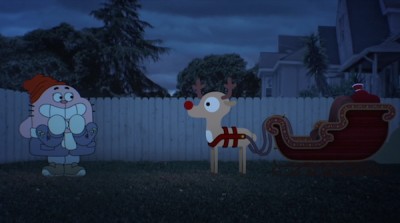 I have not seen any other episodes of The Amazing World of Gumball, but on the basis of "Christmas" (

), it seems like a fun show. Basically, it is a Pixy Stix-fueled reimagining of a typical family sitcom with a computer animation style that makes the characters (anthropomorphic animals, of course) appear as two-dimensional objects in a three-dimensional world. The speed of the action and the style of joke-telling make Gumball almost fit in with the shows that come before it on this DVD compilation, but the overall sensibility is much more traditional. The main turns of the plot are predictable from the opening of the show.

At the beginning of the episode, Richard Watterson unintentionally hits a white-haired, bearded man with his car. He and his family take the old man, who has lost his memory, to the hospital. Since he has no next-of-kin, the old man is discharged into the family's care. Though Richard's wife Nicole is horrified to deal with what she assumes is just a smelly old homeless man, 12-year-old Gumball and his two siblings are immediately certain that this is in fact Santa Claus, and that they must cure his amnesia so that he won't miss Christmas this year.

The episode is fun and full of good gags, including a scene where the three kids commandeer the Santa's Village at a mall in hopes that the setting will jog the old man's memory. But once Nicole starts telling her kids the story of why she stopped believing in Santa Claus, and Richard happens upon a sleigh (!!) while trying to do good deeds in the neighborhood (to improve his karma after hitting the old man with his car), the episode pretty much just goes into Christmas TV autopilot -- and not in a self-conscious way, like the shows that appear before it on this disc. 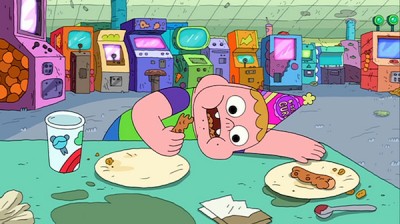 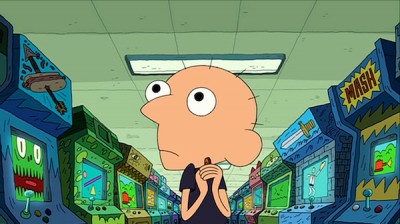 Now we abruptly move on from Christmas with an episode from the new Cartoon Network show Clarence, titled "Money Broom Wizard" (

). As with Gumball, this episode is my first introduction to the show, and it is a strong one. "Money Broom Wizard" follows nine-year-old Clarence and his buddies Jeff and Sumo as they seek fun in a Chuck E. Cheese-like establishment with only one token apiece with which to play. Their choices clearly demonstrate the differences in their personalities. Clarence immediately blows his token on a coin-pusher game called "Money Broom," but then has a ball scarfing abandoned pizza crusts, guzzling leftover soft drinks, and sneaking toys out of the claw machine. Meanwhile, over-analytical Jeff spends most of his time figuring exactly what strategy must be used to beat the Money Broom, and the less-than-intellectual Sumo (who is first seen in the episode crawling on all fours, sniffing like a dog) just looks for which arcade game is absolutely the most fun.

"Money Broom Wizard" is silly, funny, and brilliantly executed. It perfectly captures the pleasure of running around an arcade when you don't have the money to play any of the games. Of the three shows featured on this disc that I had not seen before, this is the one that seems the most promising. 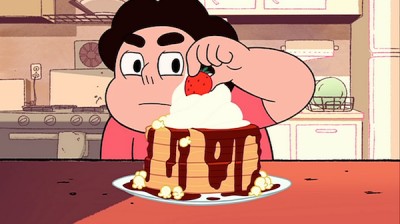 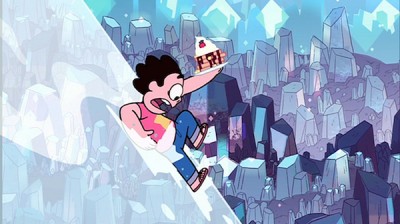 The final episode on the disc comes from the nearly new series, Steven Universe, which I suspect must have been pitched to Cartoon Network like this: "What if The Powerpuff Girls had a little brother?" Though the superheroic Crystal Gems are not short and adorable like the Powerpuffs, the dynamic between Garnet, Amethyst, and Pearl has a familiar flavor. That leaves Steven, who inherited his Gem power from his mother and doesn't seem to have as much power as the other Gems. In the included episode, "Together Breakfast" (

), Steven prepares a stack of waffles, slathered in a syrup and covered in popcorn, that he wants to share with the other Gems. They blow him off. He refuses to give up on the concept of "together breakfast," and sneaks his way into the other Gems' magical lair (which is closed off from the rest of the house, I guess). This inevitably leads to adventure and near disaster. "Together Breakfast" is entertaining, humorous adventure fare, but it seems like the wrong episode with which to entice new viewers.

The Video & Audio:
As usual with Cartoon Network product, the widescreen 1.78:1 video and Dolby 2.0 stereo audio of this release are strong by DVD standards, though they pale slightly next to these episodes' HD presentations. Apart from some minor aliasing now and again on the video, there are no significant flaws in the encoding. The disc also offers optional English SDH.

Special Features:
None. (I'm not counting Clarence and Steven Universe as bonuses, no matter what the packaging says.)

Final Thoughts:
As a relatively low-priced stocking stuffer for undiscerning cartoon fanatics, this Holiday Collection might do the trick. However, considering that only the Regular Show and Clarence episodes are truly outstanding, if this gift is for you, you should hold out for proper full-season releases (or settle for a la carte episode downloads) or just Rent It. 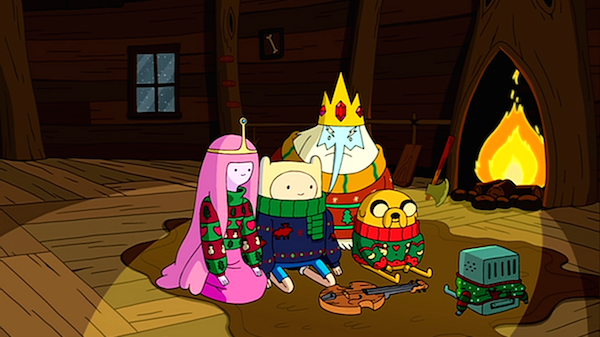