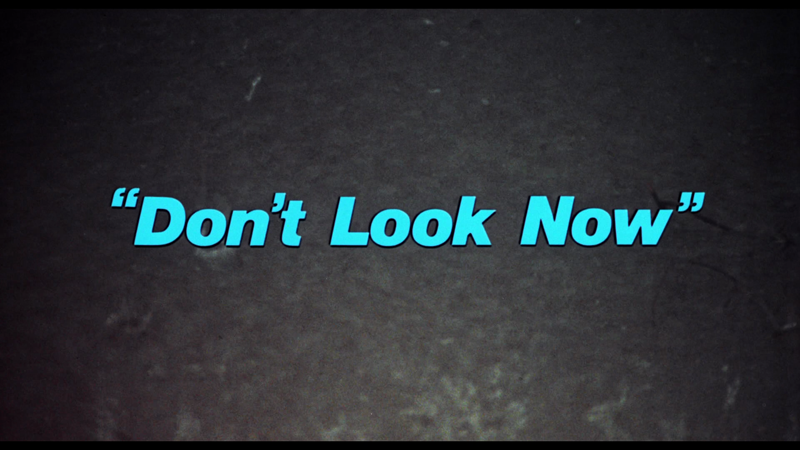 The Movie
I've often said that if there's a director who personifies The Criterion Collection, it is Wes Anderson, but Nicolas Roeg, at least in the early portion of his career, comes in a strong second. His first five non-documentary films are an outstanding run, one of the best career starts in film history, with fascinatingly original films like Walkabout, Performance, Bad Timing and The Man Who Fell to Earth. Right in the middle of that quintet is a wacked-out exploration of love, loss and the supernatural, Don't Look Now, a film that imprints itself on your memory.

Don't Look Now drips with atmosphere from its first scene, as we watch two children at play outside in the amber sunlight, while their parents, John (Donald Sutherland) and Laura (Julie Christie), are inside, engaged with their own interests. When tragedy strikes, the scene shifts to Venice, as the couple seeks to escape a painful new reality, with John working on the restoration of a church. Venice, depicted as decaying and dreary, is just about the perfect visual setting for a story like this. It isn't a panacea however, as strange happenings start to occur, including a blind woman who claims to see the dead, unusual visions and some very scary moments for the couple. 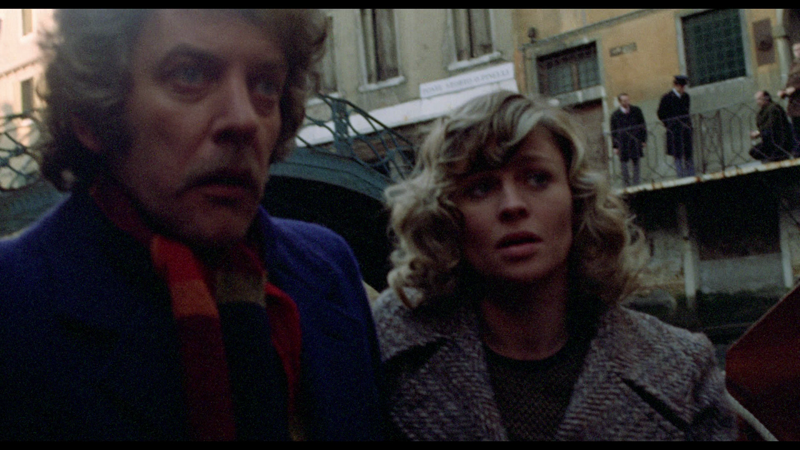 Venice is however where John and Laura re-connect, in a scene that's one of the film's iconic moments (and, admittedly, the reason why a younger self first watched this film.) John and Laura share a love scene that ranks amongst the best in film history, mainly because of its construction. A raw, somewhat explicit romp in the sheets, it isn't glamorous or classically erotic. Instead, it's passionate and intimate, to the point where many have believed for decades that the two actors actually had sex on-screen (a point that has been denied often.) But what makes it so unique is how it is presented, as Roeg and his editor Graeme Clifford intercut the lovemaking with footage of the two getting dressed afterward. Lay a tender score by Pino Donaggio over it and the results are intoxicating, and incredibly sexy without showing a great deal. The scene establishes the relationship between the two characters more effectively than dialogue ever could.

Though the story is fascinating and the performances by Sutherland and Christie are great, Don't Look Now is as much about the feel as anything else. Roeg and his collaborators keep the audience off-kilter throughout, with a variety of techniques, from inserting an out-of-context moment that results in more questions than answers, to preventing the viewer from seeing what's happening, letting your imagination run wild. John says at one point, "Nothing is what it seems," which is certainly true, as there are very few moments where you can be absolutely certain about what you are seeing. The effect robs you of any opportunity to get a firm footing, and being off-balance sets you up for Roeg to knock you down in the end.

Ah, that ending. If you've seen it, you'll never forget it. If you haven't, you can't imagine it. To say anything of any real detail is to ruin the payoff of a masterful set-up. The crazy thing is, it's easy to be stunned by the ending, yet wholly disappointed in what happens, until the puzzle pieces come together and you realize what you've really watched. And even then you'll have questions when the credits roll. And you'll never get answers to them. And yet you'll watch it again. And be wrecked by that ending again. 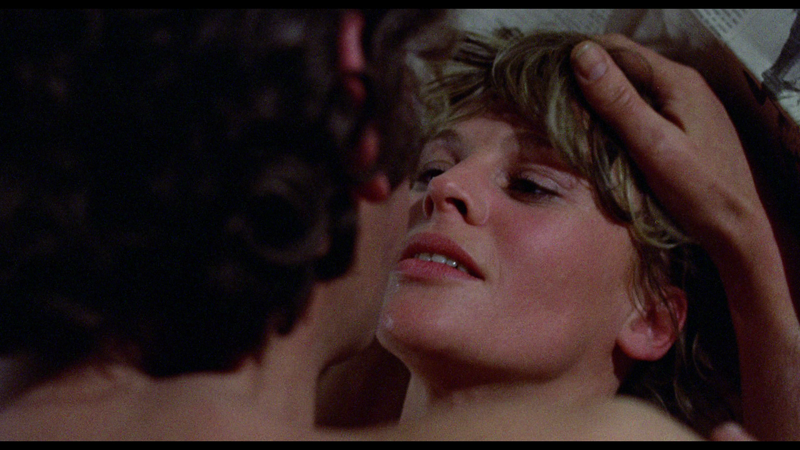 The Disc
Don't Look Now arrives on one Blu-ray,packed into Criterion's slightly thicker Blu-ray keepcase, which has double-sided art and holds an insert. A static menu with a loop of Sutherland humming offers a choice to watch the film, select scenes and check out the special features. There are no audio options, though subtitles are available in English SDH.

The Quality
The 1080p, AVC-encoded transfer here was approved by Roeg, which naturally buys it something of a free pass, but even without his sign-off, it's clear that this is an impressive presentation just by comparing the clips in the extras (especially the trailer) to the main feature. The level of fine detail and the appropriate, well-saturated colors (particularly that of the red plastic mack) make for a great image that really shows off the age of Venice. Though the film has undergone an extensive clean-up, resulting in the absence of any noteable dirt or damage, there are some scenes with an excessive amount of grain which, whether intentional or not, can be distracting during close-ups. There are no concerns about digital distractions however.

The LPCM 1.0 is a faithful reproduction of the film's sound, with crisp, easy to understand dialogue and the beautiful score coming through gorgeously. The sound effects, which are a major part of the feel of the film, are handled quite well in this distortion-free presentation.

The Extras
Criterion still has plenty to offer on this, their fifth Roeg release. Things kick off with some carryovers, courtesy of Severin. "Don't Look Now: Looking Back" is a 19:52 documentary from 2002, featuring interviews with Roeg, Clifford and DP Anthony Richmond. Among the topics covered are the film's themes, the production effort and the techniques utilized. A somewhat academic appreciation of the film by those who made it, you get down to the fine details of what makes the movie tick.

"Death in Venice" (17:30) is also from an earlier release, this time focusing on the music through an interview (in Italian) with composer Pino Donaggio. A first-time composer at the time with a successful pop singing career, Donaggio talks about how he joined the film, the thought process behind the score and his work with Brian DePalma. A solid education in film scoring theory.

Christie and Sutherland can be heard from, along with Richmond and cowriter Allan Scott, in "Something Interesting" a new 29:42 featurette that serves as something of an oral history of the making of the film, with a good deal of time spent discussing themes, Roeg and his work. There are some interesting stories in here, especially Christie's objections to the ending at the time of the production, the differences from the short story and some shooting challenges. Between the four, much of the production is covered.

Some outside perspective, and expert perspective at that, is provided in "Nicolas Roeg: The Enigma of Film" (14:20), as directors Danny Boyle and Steven Soderbergh share the influence Roeg had on them, why they admire him, talk about their favorite scenes in Don't Look Now and the scenes they borrowed from for their own work. If you can't appreciate Roeg after they explain his work to you, just give up on film.

Clifford returns in an extensive new 43:05 interview with writer Bobbi O'Steen, where the two dissect any number of important scenes and moments, going over how he got the gig, hidden details, his cutting style, working with Roeg and the importance of sound and music in film and editing. His insight is invaluable in understanding the structure of the film.

Finally, we get a chance to hear from Roeg himself, in a 2003 Q&A from the Cine Lumiere in London (47:31). Now's the director's chance to spin some yarns, including talk of director's cuts, edits and censorship, the famous love scene and the film's sense of reality. After getting the scoop from the rest of the major players, thankfully Roeg ties up the loose ends.

As usual, Criterion has included an insert, an eight-panel foldout with the pertinent info about the disc and an overview essay by writer and director David Thompson on one side and a beautifully painted mini-poster (12 5/8" x 18 1/2") on the reverse. If this is Criterion's plan going forward (when not including one of their great booklets), I'm on board. 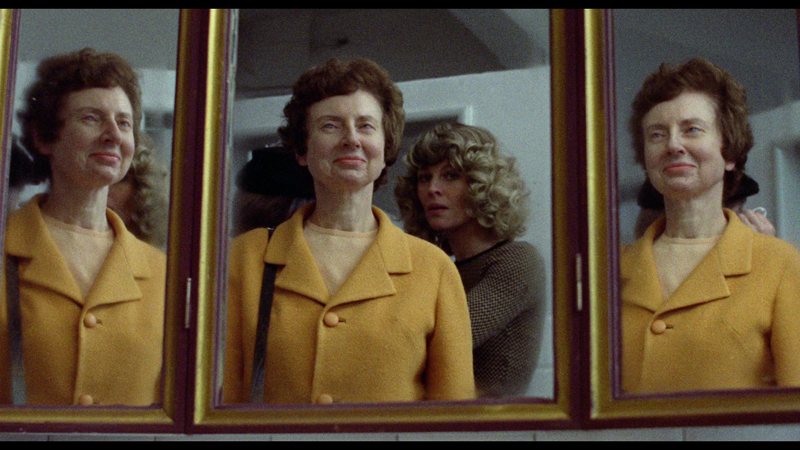 The Bottom Line
Though considered by many to be a horror film (and one of the genre's finest), Don't Look Now is more of a thriller--an intensely creepy thriller, with elements of horror and suspense, and a severe and pervasive sense of dread. It's also loaded with iconic and memorable moments, an example of Roeg at his best. The presentation is the usual fine Criterion job, while the extras are deep, informative, star-studded and entertaining. Fans of Roeg, ‘70s film or just plain impressive, emotional filmmaking should definitely check this one out.