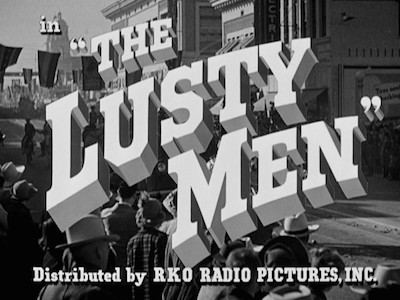 Equal parts modern western and prototypical sports picture, Nicholas Ray's 1952 drama The Lusty Men is an interesting sideshow story about a particularly hard-living group of fellows and the consequences their choices have on the women in their lives.

Robert Mitchum stars in The Lusty Men as Jeff, a champion of the rodeo circuit who returns to his Texas hometown after an injury takes him out of competition. Looking to make a little money and maybe even save up to buy the house he grew up in, Jeff signs on at a nearby ranch. There, he befriends Wes (Arthur Kennedy), a newlywed who has designs on the old property himself. Wes and his wife Louise (Susan Hayward) have been content with the slow and steady path to homeownership, but meeting Jeff gives Wes an idea: he can start riding broncos and busting bulls and make the cash he needs quicker. Louise isn't so keen on the idea, she's scared her husband will end up with a debilitating injury the same way his new trainer did. She doesn't get much say in the matter.

The majority of The Lusty Men's running time takes place on the road, as the threesome hooks up with the regular rodeo caravan and go from town to town chasing prize money. Wes takes to it naturally and starts winning; he also takes to the nomadic lifestyle, partying after the big show, attracting the attention of groupies. Meanwhile, Louise attracts the attention of Jeff, who silently pines for the sort of life she's hoping to achieve. She takes comfort in his steady gait, even as she begs him to get her husband out of the game alive. It's an interesting love triangle, lacking in any real infidelity. Jeff only states his true intentions outright when Wes has taken things too far. The resultant showdown takes place in the arena, with each man looking to measure his masculinity by how long he can stay on a bucking horse.

The Lusty Men is refreshingly restrained when it comes to the melodrama, with Ray preferring the rough-and-tumble world of professional cowboys to any bedroom antics. The movie's heroes are adrenaline junkies who view settling down as a kind of selling out. That is, until they don't anymore. Mitchum plays it tough, but the actor also shows great empathy and vulnerability. He doesn't stop Wes because he knows he can't, the rider has to make his own choices; yet, he also recognizes the damage done to the wife. (If he didn't, the script provides the audience with multiple parallels so we can see places Wes might end up.) For her part, Hayward shows a nice balance, allowing the allure of the party life to distract her, but never losing her resolve.

Ray and cinematographer Lee Garmes (Duel in the Sun, Nightmare Alley) capture all the thrills and danger of the rodeo events, working nicely with editor Ralph Dawson (Harvey) to meld the long shots of the actual horseplay with the close-ups of the actors both in and out of the stadium. It works nicely. The Lusty Men is reminiscent of many race-car pictures that would follow, not to mention a little bit like a western version of the traveling circus drama. The even emotional tone might disappoint some, but it fits the idea that these tough customers leave everything out there on the field. My only complaint is a rather abrupt ending that not only sews things up a little too neatly, but also left me confused and reaching for the rewind to try to discern whether what they suggest just happened really did. 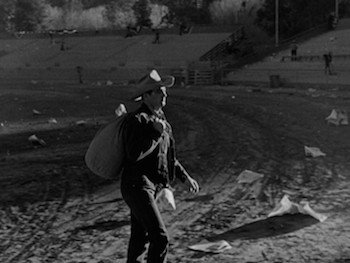 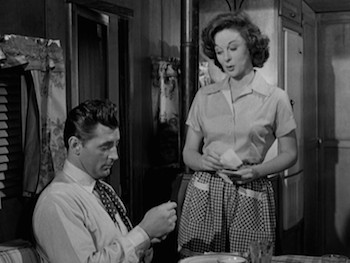 Video/Sound:
The full frame black-and-white picture on this manufacture-on-demand release is solid, with an overall clear image only marked here and there by soft resolution or damage to the print.

The mono soundtrack is intact and comes through nicely, with no extraneous noise or hiss.

FINAL THOUGHTS:
Recommended. This unconventional cowpoke picture offers a glimpse behind the scenes at rodeo riders and the dangerous lives they lead. Robert Mitchum stars in The Lusty Men as a one-time champion looking for a new life, and how introducing a pair of newlyweds (Arthur Kennedy and Susan Hayward) to the bronco-busting circuit effects them all. Nicholas Ray (Rebel Without a Cause) directs the drama with a restrained assurance, saving the thrills for the competitive circle. Not as lusty as the title might suggest, but satisfying all the same. 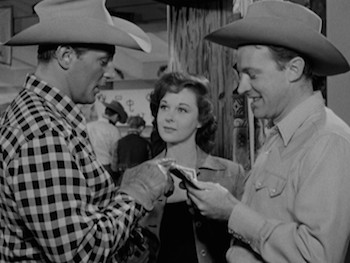 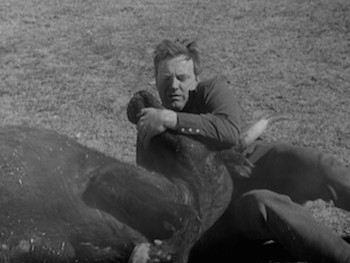