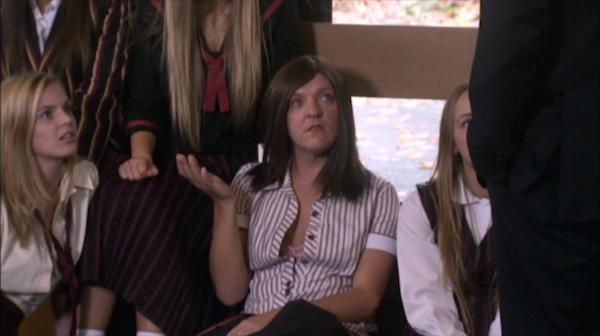 Spoiled mean girl Ja'mie (pronounced zha-MAY... though her parents still call her "Jamie") is the brainchild of Australian comedian Chris Lilley, who, like Steve Coogan and Tracey Ullman before him, only seems comfortable if he's doing a funny voice while wearing a funny wig. Ja'mie previously appeared as one of Lilley's handful of characters on the 2007 eight-episode mockumentary series Summer Heights High, which was a huge hit in its native Australia and garnered a relatively tiny cult of fans in the US after it aired on HBO. In the past two years, Lilley has revisited his Summer Heights High characters with their own six-episode mockumentary spin-offs. (The newer of the two spin-offs, Jonah from Tonga, recently came under fire on three different continents for Lilley's brownface portrayal of the title character.)

Until popping Ja'mie: Private School Girl into my DVD player, my exposure to Chris Lilley's comedy was limited to some Youtube clips of Summer Heights High that had been recommended to me. I enjoyed those, and after sitting through the nearly three hours of the Ja'mie: Private School Girl series, I am convinced that Lilley's humor might work best in teeny tiny doses. The typical half-hour episode of Ja'mie features two or three jokes that are laugh-out-loud funny, five-to-seven minutes of gags that are at least partially amusing, and twenty-plus minutes of aimless, tedious character work.

Certainly, no one is going to argue that Lilley is not fully immersed in his character. Though physically Lilley bears little resemblance to a high school girl, even with long hair and a stuffed bra (which Lilley frequently has his character flash for queasy laughs), he is consistently believable as a reprehensible little twerp who rules Hillford Girls Grammar School with a posse of "quiche" ("...like, it's a step above hot") prefects. The prefects wield their meager power to make life difficult for the poor girls, the foreign girls, the fat girls, and really anyone who doesn't meet their arbitrary standards. Ja'mie is an overachiever whose many achievements are of questionable merit and are clearly engineered to look good on a transcript; Ja'mie wants to get into a good university and study public relations (a detail that brings to mind Nick Kroll and Jenny Slate's superior mockery of vapid women, PubLIZity).

In addition to starring as Ja'mie, Chris Lilley also wrote the show, co-produced it, co-directed it, and wrote the opening theme music. His name appears so often in the credits that one would be tempted to make the assumption that this series is little more than an ego stroke after the success of Summer Heights High. But that's not quite fair. Lilley puts in the work of fleshing out Ja'mie's world in a way that feels oddly realistic, and he fills out the supporting cast with a number of talented young actresses who are fun to watch bantering with Lilley, even if their characters are sketchy enough that I never remembered a single one of their names (twice I forgot a certain character was Ja'mie's sister when she showed up in scenes outside of Ja'mie's house). Lilley even carefully plants set-ups that pay off in much later episodes, giving the whole series a sense of unity.

Well if the show isn't sloppily constructed or badly thought out, what's the problem here? As I wrote before, the show's true sin is just that it's not funny enough. Lilley seems to think that being in Ja'mie's self-involved world for extended periods of time is all the audience needs to bust a gut. Maybe that's true for some viewers, but this one here was looking for sharper and more frequent jokes. 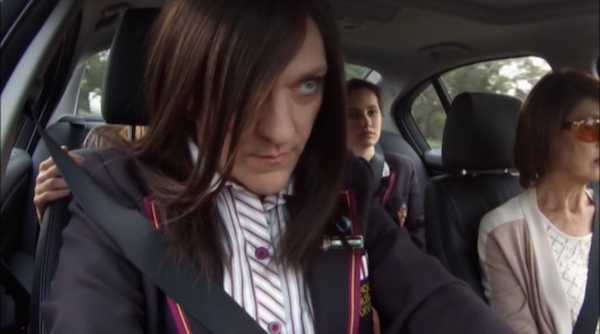 The DVD
The six episodes of Ja'mie: Private School Girl and the attendant bonus features are spread across two DVDs.

The Video:
HBO's widescreen 1.78:1 presentation is pretty much fine, with good color reproduction and not much in the way of compression artifacts. The amount of detail is underwhelming, and on a big screen, many lines come across looking jagged and blocky.

The Audio:
Like the video, the English Dolby 5.1 surround audio does the trick without being particularly striking or imaginative. There are a few instances where loud dance music is blasting, which gives the surround speakers something to do, but mostly this is a talky program, and the mix is almost entirely focused on the front speakers. The disc also offers French Dolby 5.1 surround and Spanish 2.0 stereo audio tracks, as well as English, French and Spanish subtitles. Closed captioning is also available.

(1:05:39 total) - A quite sizable -- and surprisingly entertaining -- batch of featurettes. The recording of Chris Lilley's theme music, the casting process for the supporting cast, and numerous moments captured on-set are included here.

Final Thoughts:
If you're already a Chris Lilley fan, this might warrant a rental. Otherwise, eh... I'm sure folks must have made highlight reels on Youtube of the show's funniest moments. Stick with those. And when it comes to the complete series: Skip It. 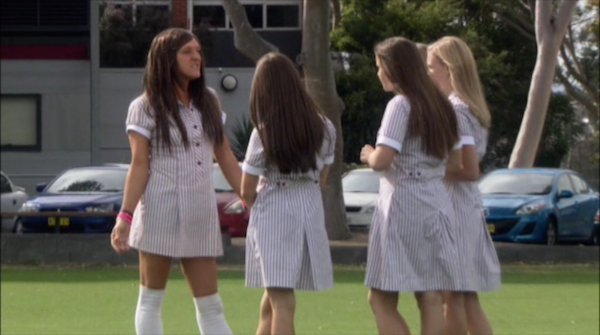