Other // Unrated // November 11, 2014 // Region 0
List Price: $29.95 [Buy now and save at Screenarchives]
Review by Stuart Galbraith IV | posted December 5, 2014 | E-mail the Author
Holiday in Spain, a movie originally released in 1960 under a different title, Scent of Mystery, is another of those films that, for decades, one thought might never be seen again. It has one of the strangest histories in all of cinema. Partly for technical reasons, partly because its rights holders for years sat on their unusual library holdings, was unseen for most of the last half-century. But now, thanks to disc producer and reconstructionist David Strohmaier, Holiday in Spain makes a most welcome home video debut on Blu-ray and in "Smilebox" format, and though it's not quite visually perfect, he manages to squeeze a marvelous high-def presentation from faded and damaged film elements. Additionally, this unloved movie is packed with illuminating, very enjoyable extras.

Some background: Colorful producer Mike Todd was a major figure in the widescreen revolution of the 1950s. He'd been an early proponent of Cinerama, then left to develop his own widescreen format, "Cinerama out of one hole," as he inelegantly called it, Todd-AO. His Todd-AO production Around the World in 80 Days (1956) was a tremendous hit, and won the Academy Award that year as Best Picture. The following year he married glamorous movie star Elizabeth Taylor, but little more than a year after that Todd was killed when his Lockheed Lodestar, the ironically named Lucky Liz, crashed en route to an Albuquerque screening of 80 Days.

Todd's son (with first wife Bertha Freshman), then around 30, attempted to continue his father's legacy of showmanship with what, in essence, was a further enhancement of Todd-AO. In addition to the multi-track magnetic stereo and 65/70mm format established by Todd Sr., Scent of Mystery added aromas via a technically sophisticated process dubbed "Smell-O-Vision." Scent-dispensing devices were attached to the back of theater seats and triggered by an "electronic brain" (i.e., rudimentary computer, apparently cued via magnetic film). The process also necessitated a ventilation system to remove each scent from the theater as scenes ended.

As Scent of Mystery, the movie was not a success and its roadshow release limited to a handful of theaters. Meanwhile, Cinerama had run out of new product to show in its three-projector format theaters. The last Cinerama movie, South Seas Adventure (1958) had ended its run in most venues, and no new travelogues were made. Desperate for product, Cinerama acquired/licensed a few productions made by others. Windjammer, produced in Cinemiracle, a three-panel widescreen process almost identical to Cinerama, was purchased outright. Lafayette (originally La Fayette, 1961), a French-Italian historical epic filmed in Super Technirama 70, was converted to three-panel Cinerama and shown as well. The third of these pseudo-Cinerama titles was Holiday in Spain, a reworked version of Scent of Mystery, likewise converted to three-panel Cinerama. 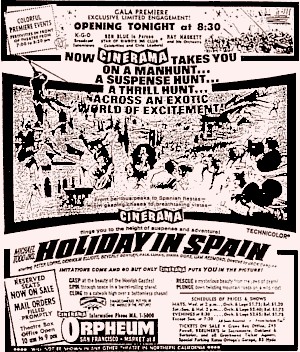 The movie is several things at once: it has the flavor of a typically droll, eccentric little British comedy popular around this time, but here combined with the travelogue and audience-participation visual effects common in the '50s-era Cinerama movies (but less so than the Todd-AO and other 65/70mm movies made before and after). Further, while Holiday in Spain was released minus the Smell-O-Vision effects, numerous scenes and other aspects of its mystery plot make plain where most of these "smelly" effects were originally positioned, their emphasis on things like cigar smoke and perfume giving the film a slightly surreal quality.

Like the Flicker Alley/David Strohmaier Cinerama travelogues, how one experiences Holiday in Spain makes a big difference. I watched it on a 90-inch screen via a projection system and with 5.1 surround. That plus seeing the film while trying to imagine what the experience was like for 1961 audiences makes a big difference. For me the picture is flawed but still quite enjoyable. But I also understand how those viewing it on a computer monitor or smallish LCD screen might find it aimless and boring. (Note: Holiday in Spain is being released as a Screen Archives exclusive. It's not a Flicker Alley title.)

Most of the film follows Oliver, aided by taxi driver Smiley (Peter Lorre), as he travels across the picturesque Spanish countryside in search of the elusive Sally, and later as they try to protect her from increasingly desperate attempts on her life.

The movie plays like a bloated Ealing comedy, but on big home theater screens the gorgeous Spanish locations (overseen by legendary cinematographer-turned-director Jack Cardiff) offset the film's sluggish pace and basic lack of story. Interestingly, as Scent of Mystery, the intermission break came just as the film's big plot twist was revealed, while the Holiday in Spain version breaks at a different, earlier point in the story, during a badly-staged and pointless fight sequence between Oliver and mystery man Richard Fleming (Peter Arne).

Denholm Elliott is quite likeable as amateur sleuth Oliver, but this quality is nearly destroyed in the Holiday in Spain version. For that cut of the film, Elliott was brought back to record narration in which his character endlessly and pithily comments on the action onscreen, the grating effect almost like the later Mystery Science Theater 3000 and its imitators. Fortunately, Elliott and Peter Lorre make an enjoyable if unlikely team. Lorre seems to be adlibbing at least some of the time, and his performance and characterization is quite similar to his later pairing with Vincent Price in the amusing Roger Corman film The Raven (1963). British film actors (though not necessarily British themselves) Leo McKern, Peter Arne, and Diana Dors all play Americans, and Dors's accent especially is quite convincing.

The major plot twist two-thirds of the way through is topped at the very end of the film. Don't look at online credits, which give both away. Of the final twist, I'll only say an actress named Liz Rulyat plays a significant part.

Scent of Mystery/Holiday in Spain was filmed in Todd-70, a process virtually identical to Todd-AO. Presumably there was some thought to release both versions to Blu-ray, but apparently the complete Scent of Mystery version is not known to exist, though bits and pieces exclusive to that cut, as well as rushes, are included as an extra feature. Still, it's too bad the Blu-ray doesn't include something along the lines of the scratch-and-sniff Odorama cards included with the DVD of John Waters's Polyester (1981), which partly spoofs Scent of Mystery. The overture, intermission and entr'acte (featuring a song sung by Eddie Fisher), and exit music are included, along with newly created end titles by Strohmaier that neatly incorporate graphics from the film's original advertising.

Strohmaier works wonders with what was left, namely a damaged 65mm negative and two faded 70mm prints. The tweaked image suffers noticeably in dark scenes, but overall this Herculean reconstruction effort yields impressive results. The film is presented in Smilebox format but, thankfully, without recreated join lines as Holiday in Spain audiences would have noticed with the original Cinerama conversion. (Scent of Mystery, as with early Todd-AO films, was also shown on a curved screen, albeit one less extreme.)

Properly presented, there's much to like: The overture, with much directional car-horn honking, is like a milder version of Spike Jones's "Freeway Frantic." The audience participation effects are more abundant than most Todd-AO films, including an animated butterfly's-eye-view series of aerial shots and a runaway barrel's POV. The Dolby Digital 5.1 DTS HD Master Audio is robust (the first sound is a car horn from the right-rear channel, a startling effect) and a 2.0 Dolby Digital mix is included. (Scent of Mystery utilized eight tracks.) The disc itself is region-free.

The supplements are, as usual for these releases, just great. There's a "then-and-now" look at the film's locations; the aforementioned deleted scenes and rushes; a 36-page full-color reproduction of the Scent of Mystery program; an excellent audio commentary featuring historian Bruce Kimmel, Strohmaier, and cast member Sandra Shahan; video interviews with Beverly Bentley (whose life beyond this film is rather amazing) and Susan Todd, daughter of Mike Todd Jr.; a look at the work involved in the film's reconstruction; a montage of production stills and advertising; and, finally, a CD of the film's original soundtrack, featuring music by Mario Nascimbene.

One of the truly oddball footnotes in cinematic history, Holiday in Spain fascinates for this reason alone but, especially on big screens, the movie has a genuine, legitimate if modest charm all its own, and overall the disc is Highly Recommended.