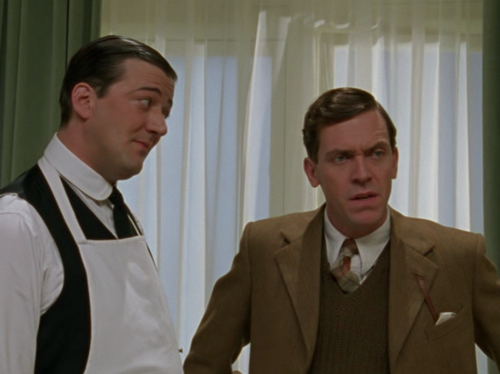 Fans of British humour (note the second "u") are probably already well-aware of Jeeves and Wooster, the comic duo created nearly a century ago by P.G. Wodehouse (the literary series continued for nearly sixty years, until 1974). Even if one hasn't managed to crack open any of the eleven novels and thirty-five short stories devoted to these characters, surely a familiarity with the early '90s TV series which starred Hugh Laurie as idle aristocrat Bertie Wooster and Stephen Fry as his brilliant, tight-lipped valet Jeeves is inevitable. However, if one is a fan of British wit and has not been exposed to Jeeves and Wooster, then Acorn's new reissue of all four series and twenty-three episodes of the Fry and Laurie program provides the perfect opportunity to catch up.

Bertram Wilberforce Wooster is the typical 1920s trust fund hipster. Bertie seems satisfied just to pal around at the Drones Club with his fratty buddies with silly names (Barmy, Bingo and Tuppy, to name a few) and work out the newest, dumbest pop songs of the day on his piano, but inevitably, in almost every episode, he gets tangled up in any number of misadventures where he must help or hinder the marriage prospects of himself or one of his friends. (The series finale has Bertie attempting to wiggle out of two simultaneous engagements to two different women.) Fortunately, there's Jeeves, Bertie's "gentleman's gentleman," whose keen intellect, ample network of helpful contacts, and sometimes Machiavellian flair for strategy never fails to save the day -- even if our dear Bertie ends up put through the wringer to eventually get to a happy ending.

Fry and Laurie -- who must have been working on this show during the off-season from their brilliantly Monty Python-ish sketch show, A Bit of Fry & Laurie -- are so perfectly cast that, if one didn't know better, he might assume the roles were written specifically for them. Laurie, with his gawky, slender frame and large eyes, has the talent to portray Bertie as a refined, educated, articulate, bumbling, slack-jawed buffoon while not allowing any of those attributes to appear at odds with the others. Fry, the soft-featured giant, frequently comes off as supercilious in many of his comic roles, but typically this is coupled with intense, gymnastic verbosity. It must have been a pleasant challenge for Fry to have to communicate Jeeves's disdain, displeasure, or dislike merely through facial expressions and a carefully inflected, "Yes, sir," or "Very good, sir."

This version of Jeeves and Wooster is a thorough delight thanks to its perfect mix of dry wit and farcical madcap silliness. All twenty-three episodes are written by Clive Exton (Poirot), who brilliantly manages to translate not only the plots but the effervescent spirit of Wodehouse's stories. The first of the four series was directed by Robert Young (who went on to work with two former members of Python shortly after this show: Eric Idle in Splitting Heirs and John Cleese in Fierce Creatures), and this first batch of episodes probably swings the farthest toward "dry" on the dry-madcap continuum. The later three series, directed by Simon Langton and Ferdinand Fairfax, tend to err more on the side of "madcap" when they don't quite strike the balance perfectly. (Some third series episodes set in New York go too over-the-top on slapstick [and gunplay] for my taste, although my girlfriend preferred these episodes to the first series, which bored her.)

Though there are some narrative threads which are woven through all four years of the show, casual watching is probably preferable to a gigantic binge (like the one I just undertook). The show is never less than charming, but honestly most of the plots are pretty much the same. If Bertie isn't trying to help a pal win the affections of a woman he loves, then he is probably being made to do something of questionable legality by one of his aunts (stealing a valuable cow creamer, destroying an embarrassing manuscript, burning a hideous painting). In some episodes, he does both.

It also doesn't help matters for the binge viewer that, apart from John Woodnutt and John Turner, who play comic villains Sir Watkyn and Spode across all four series, most of the recurring characters are played by different actors from series to series. In one extreme case, actress Francesca Folan portrays Bertie's would-be fiancee Madeline Bassett in the first series and then returns in the fourth series playing another would-be fiancee for Bertie, Lady Florence Craye. Folan has a number of scenes in this last series with actress Elizabeth Morton in the role of... Madeline Bassett, her original character from series one. It's enough to do one's head in.

These middling details aside, Jeeves and Wooster is a consistent pleasure to watch, buoyed by the frothy scripts by Clive Exton, the unforgettably catchy '20-style jazz score by Anne Dudley (who later won the Oscar for The Full Monty), and the stellar lead performances of Hugh Laurie and Stephen Fry. 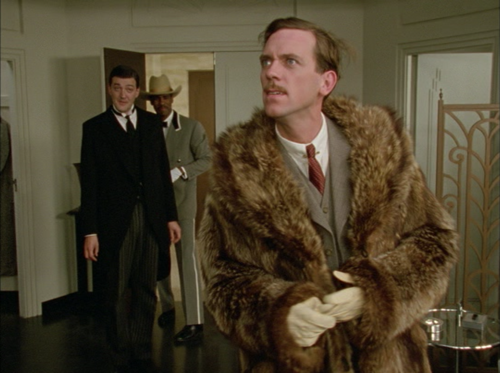 The DVD
Jeeves and Wooster: Complete Collection is presented on eight discs, with each disc typically featuring three 52-minute episodes. Series one only consists of five episodes, so disc 2 of the set contains two episodes and a bonus (see below).

The Video:
Dagnabbit! The standard 1.33:1 presentations included here are in many ways a marked improvement over the old A&E transfers, last compiled in their 2009 Complete Series set. Where the old transfers were washed-out, soft, and dated-looking, these versions have deeper blacks, more vibrant colors, and a more realistic palette. My friend had the old A&E set, and believe me, it is like night and day. But then Acorn blew it by encoding the video with a constant bitrate (of around 5.6 Mbps) instead of the more commonly used variable bitrate method. This means that certain close-ups look perfect, but medium shots start to show evidence of aliasing and many wide shots are a pixelated mess. What a missed opportunity!

The Audio:
The Dolby 2.0 mono audio mix is solid. The dialogue is clear and the music is full and boisterous. As for subtitles, the disc offers English SDH.

Final Thoughts:
If you have never owned Jeeves and Wooster and you are pondering a purchase, then the relatively improved picture definitely gives this version a leg up over the old release -- and the show is laugh-out-loud funny no matter the picture quality. Still, the dodgy video encode makes me a little less enthusiastic about what is otherwise a must-own title. While the content deserves a "High" recommendation, the overall release comes merely Recommended. 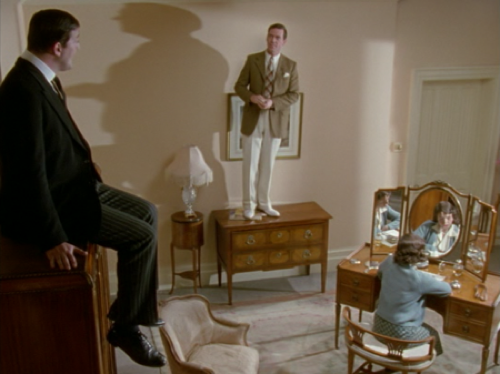