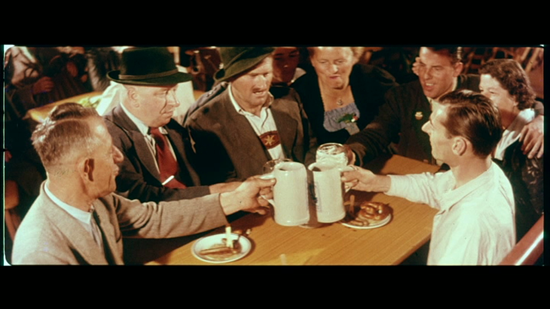 Every September, the city of Munich stages an enormous carnival which superficially celebrates German culture and history, even though it's really there for people to indulge in carnival rides, greasy food, and beer, beer, beer. I'm talking about Oktoberfest, a celebration so iconic that Americans have taken to imitating it (any excuse to chug down a few, right?). The German archival DVD company Edition Filmmuseum has commemorated the 204-year-old tradition with a two-DVD set, Oktoberfest München 1910-1980. This collection assembles 18 otherwise ephemeral films which show how Germans chose to represent the festival to themselves. Through home movies, newsreels, advertisements, fictional shorts, widescreen and 3-D travelogues, and a feature-length comedy (1977's Bierkampf), it reveals the festival as schmaltzy and even somewhat embarrassing (no wonder young Germans tend to avoid it). Watching these short films chronologically, one gets a good sense of how the festival evolved from a staid, ceremonial salute to Germany's history into the cheesy yet hugely successful beer-swilling Bacchanalia it's become today.

Oktoberfest München 1910-1980 presents these films chronologically across two discs. Like the Treasures from the American Film Archives DVDs, it's a delightful grab-bag of odd, interesting, overlooked stuff. The contents are as follows:

DISC ONE
100 Jähriges Jubiläum des Münchner Oktoberfestes (1910; B&W 22 minutes)
This documentary footage of the opening parades and athletic competitions from the 100th anniversary Oktoberfest represents some of the earliest surviving images from the festival. Title cards depict each days' events over the span of a week - a lavishly costumed parade with marksmen and a tribute to Bavaria's Prince Alfons, a competition involving apprentice wainwrights (carriage wheel makers), kids' athletics, a horse trotting race, and a royal performance with dozens of people dressed in the costumes of 1810.

Valentin auf der Festwiese (1921; B&W 18 minutes)
German actors Karl Valentin and Liesl Karlstadt play a silly old married couple engaging in slapstick antics at the festival in this restored silent comedy (of which this 18-minute fragment is the only surviving element). The pair are shown bumbling around at a non-p.c. demonstration of "cannibal" African savages (an attraction which apparently stayed at Oktoberfest well into the 1960s), peering at a funhouse mirror, wrestling a big brute, and getting mild electric shocks. This short shows that Oktoberfest's image as one giant carnival was fixed as early as the 1920s, with glimpses of food stalls and rickety rides such as the moving sidewalk going up a huge incline (picture a life-sized version of The Price Is Right's "Cliffhanger" game).

Oktoberfest (1925; B&W 10 minutes)
Like the 100th anniversary footage, this montage of footage documents glimpses of the games and festivities. The rides had gotten more sophisticated (and dangerous looking) at this point. It includes a bit with a vaudeville duo performing at the base of a giant outdoor pendulum swing ride, along with another look at the giant moving sidewalk incline attraction - called "Electro-Toboggan." I don't even want to think of how many drunk patrons must've fallen off that thing.

Oktoberfest (1929; B&W 5 minutes)
More silent documentary footage of the various rides at the festival, including a self-driving mini-auto ride which looks like the German-engineered predecessor of Disneyland's Autopia. 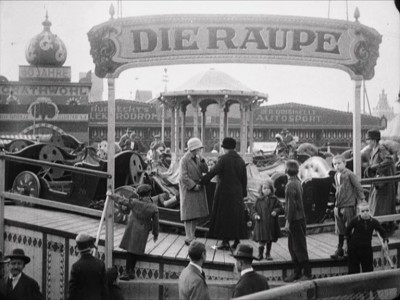 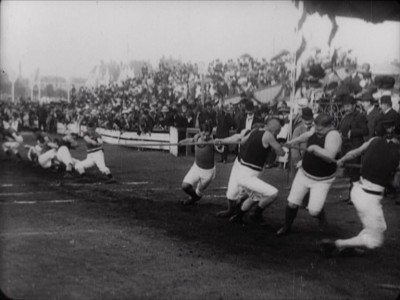 125 Jahre Oktoberfestzug (1935; B&W 10 minutes)
This silent home movie footage depicts the opening ceremonial parade for the 125th anniversary of Oktoberfest. Static and uninteresting for the most part, although it does contain the first glimpses of the Nazi party with swastika banners.

Münchener Oktoberfest (1938; B&W 12 minutes)
Newsreel-like short depicting Germans blissfully celebrating the festival while two cheery actors leer at pretty gals and enthusiastically describe the various attractions throughout the fair. Given the tense political climate at the time, this one seemed awfully ignorant - but it's entertaining enough on its own terms. Two Oktoberfest traditions are explained here - a cellophane-wrapped souvenir in the shape of a heart, and a delicacy known as pole-fish (a whole roasted fish harpooned on a stick - what, you were expecting sophisticated cuisine?).

Auf Geht's (1948; B&W 2 minutes)
Narrated newsreel proudly showing off the return of a full-scale Oktoberfest, after the festivities were put on hold or scaled back during World War II. Since there wasn't much to Germany's history worth celebrating and agriculture was struggling, it's strictly focused on rides and merriment.

Oktoberfest (1949; B&W 2 minutes)
Another narrated newsreel. Oddly enough, this is the first short to emphasize the traditional Oktoberfest abundance of beer, pretzels, sausages, and roasted chicken (along with the pole-fish). 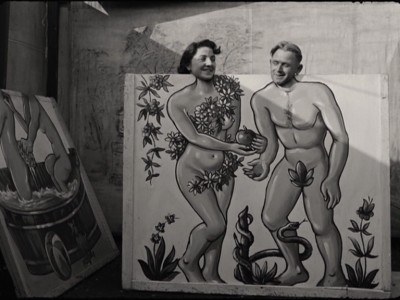 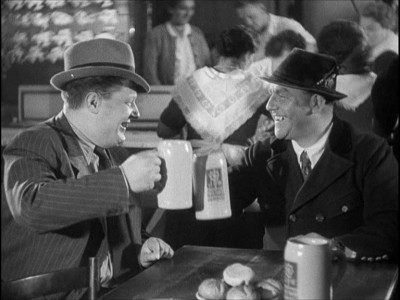 Münchener Oktoberfest (1950; B&W 9 minutes)
An easygoing, travelogue-like look at Oktoberfest in its 140th year. Like the 1938 Münchener Oktoberfest, this short frames the documentary footage of parades, attractions and delicacy with the observations of two regular-guys enjoying the festivities. This short includes an extended segment with the Rotor attraction, a quickly spinning cylinder which apparently attracted more attention from gawkers on the sidelines than brave-hearted riders.

Plastischer Wies'n-Bummel (1954; Color; 8 minutes)
In this color 3-D short, a lovely young woman visiting Oktoberfest for the first time gets a guided tour from the fair's parking lot attendant. With footage of party favors, soap bubbles, pointing fingers and other objects coming straight at the viewer, this short was done to maximize the 3-D process - which was done with the old blue-and-red separation method that tricks the eye into seeing depth. The 3-D effects were somewhat wonky, but this was an enjoyably kitschy peek into the '50s-era fair nonetheless.

Auf Geht's (1955; Color/3D; 11 minutes)
The fun, carefree side of Oktoberfest is vividly seen in this short, photographed in Eastmancolor and the widescreen Cinemascope process (and with stereophonic sound!). This one's a little more goofy than the others, indulging in the fair's wacky signage (a cherub pointing an arrow at the bathrooms) and odder customs (fairgoers' habit of stealing a bulky beer stein as a souvenir). The rickety "Electro Tobaggan" is still in place, although sleeker rides have arrived to steal its thunder. 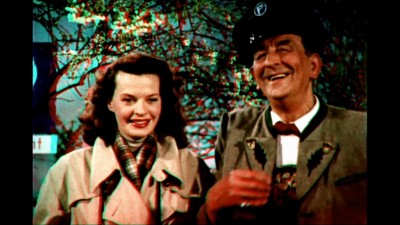 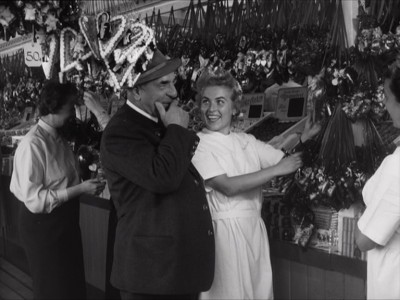 Oktoberfest (1959; Color; 17 minutes)
A promotional film for the Munich tourism bureau, this straightforward travelogue briefly goes over each aspect of the fair, including the pomp of the opening parade and sleek exhibits showcasing state-of-the-art tractors and other farming equipment. Despite the food, beer and rides, it was comparable to an American state fair on steroids.

Wies'n-Melodie (1969; Color; 14 minutes)
Another travelogue commissioned by the Munich tourism office, although this particular film is shot in an impressionistic, observational style that calls to mind the shorts of Charles and Ray Eames. This film emphasizes the oom-pa-pah music and party atmosphere in the main beer hall, which eventually came to be the definitive image of Oktoberfest in the years to come.

Der Wiesnpostbote (1974; Color; 17 minutes)
In this fascinating television documentary directed by Percy Adlon (Bagdad Café), we follow a cheerful postal employee as he navigates the trailers and back alleys belonging to carnival workers at Oktoberfest on his final route before retiring from the job. Reminiscent of Charles Kuralt's folksy portraits of ordinary people done for CBS News, this piece sympathetically reveals a side of Oktoberfest that most people never would have otherwise experienced. 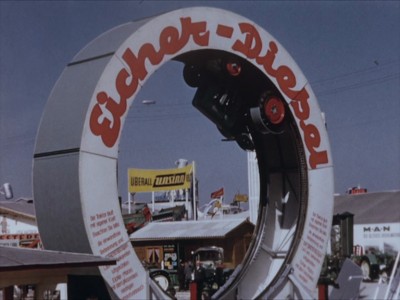 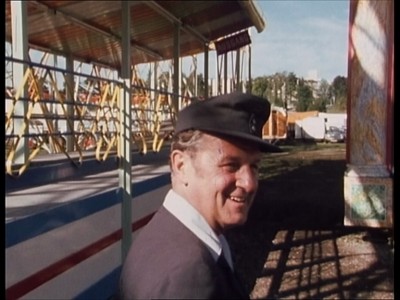 Bierkampf (1977; Color; 81 minutes)
In this bizarre, absurdist comedy feature, avant garde director-screenwriter Herbert Achternbusch plays a self-pitying wastrel stuck in a go-nowhere marriage to a hectoring woman. After coming across a discarded police uniform, he decides to transform himself at the annual Oktoberfest by posing as a cop. Instead of getting him the respect he craves, however, he ends up making a total fool of himself. Achternbusch does most of this non-linear film in a formal way, with characters directly addressing the camera and speaking in monotone. I think it's supposed to be a biting commentary on the German citizenry's complacency in post-World War II times, but mostly it seems lazy and inept (he's no Fassbinder, that's for sure). The most interesting segments have Achternbusch interacting with actual Oktoberfest fairgoers with predictably spontaneous results (one drunk man even attempts to pick a fight with the insufferable guy).

Der echte Liliom (1978; Color; 43 minutes)
Director Percy Adlon returned to Oktoberfest for this documentary, also made for German TV. This gritty portrait concentrates on one of the itinerant fairground attraction workers, a rail-thin, mustachioed 23 year-old named Berndt. As Adlon aggressively questions Berndt about his petty criminal past and aspirations for the future, it becomes apparent that he's kind of a symbol for his country's cynical yet hopeful younger generation. Despite Adlon's less-than-ideal interviewing style, Berndt comes off as a remarkably level-headed guy in this very late-'70s evocative portrait. Adlon captures the tawdry behind-the-scenes atmosphere at Oktoberfest well, while incidental music from Bob Seger, Kraftwerk, the Commodores et. al. lends a lot of flavor. 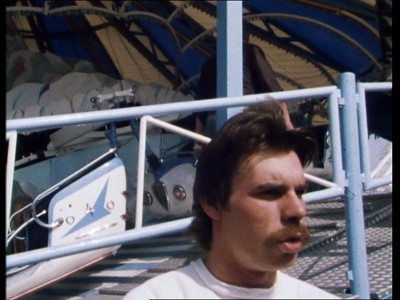 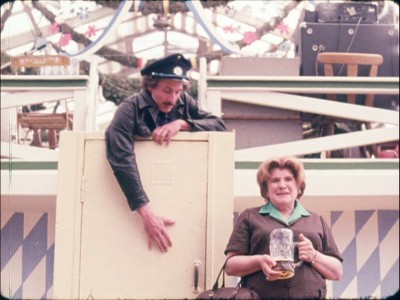 Edition Filmmuseum's Oktoberfest München 1910-1980 comes as a Region 0 PAL release, which may not play on many Sony-made American home video players. They are playable on personal computers equipped with a DVD-ROM drive, however. The discs are housed in a standard-width transparent hinged DVD case which includes a nice 20-page booklet with posters, publicity stills, and a capsule history of Oktoberfest printed in German, English and French.

The contents of Oktoberfest München 1910-1980 derive from unrestored celluloid prints taken from 16mm and 35mm sources (the one exception is 1955's Auf Geht's, presented in 1:2.35 anamorphic widescreen). Even the later '70s films have a fair amount of dust and dirt along with faded color and some blur, although the mastering job is nice. The silent-era films are presented with no tinting.

The silent-era films are just that - totally silent, with no musical backing. Most of the other films use decent-sounding mono soundtracks with a modicum of pops, skips and distortion, although the 1955 film Auf Geht's sports a cleaner-sounding stereo mix. Optional English and French subtitles are provided on these German-language films.

No extras, although the essay inside the accompanying 20-page booklet provides a good, comprehensive background on Oktoberfest's history (not much detail on the films themselves, however).

The pageantry, kitsch and drunken debauchery of Oktoberfest is amply showcased in the 18 films on the two-DVD set Oktoberfest München 1910-1980. Like a lot of other sets made by German archivists Edition Filmmuseum, these fascinating bits and pieces end up being very revealing when seen all together. Esoteric in scope, yes, but worthwhile for an unusual peek at how Germans saw themselves throughout the 20th century. Recommended. 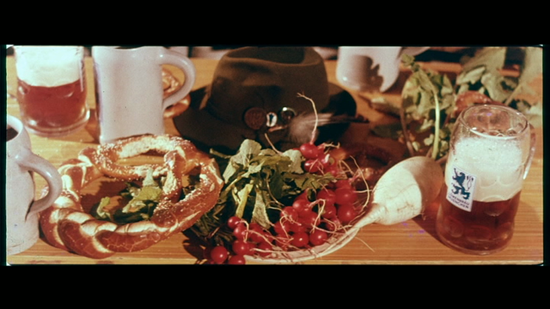