Olive Films // R // February 24, 2015
List Price: $29.95 [Buy now and save at Amazon]
Review by Tyler Foster | posted March 4, 2015 | E-mail the Author
Note: Although screencaps should only be considered an idea of what the disc looks like, click any capture in this review to expand the image to a full size .png. 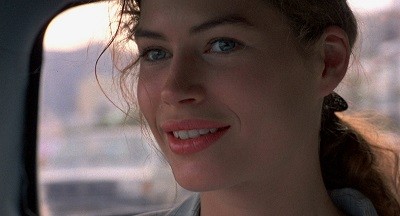 In review of Zalman King's final feature, Pleasure or Pain, I talked about realizing he was an actual person, not just a brand name. It was a challenge, because Pleasure or Pain hardly felt like a real movie as opposed to a facade into which sex scenes were inserted. Now I've had the chance to see one of King's other movies, back when his movies actually played in movie theaters, when he could attract people who were considered movie stars, and frankly, my opinion hasn't changed much. Despite better production values, better performances, and more of an earnest effort on King's part to make a real movie, Wild Orchid still exemplifies the old "cart before the horse" adage: will-they-or-won't-they tension only works if the audience gives a crap about the characters.

Emily Reed (Carre Otis) is a young woman starting a new chapter of her life. She's in the big city for the first time, interviewing for a job that would have her move there. Yet, when she's hired, instead of returning home and packing her things, she's immediately whisked off to Brazil with her new boss, Claudia (Jacqueline Bisset), where they're to help finalize a valuable land deal. Upon arriving, Claudia discovers the man they've flown out to meet has disappeared to attend a wedding, so she leaves Emily all by herself with instructions to go on a date in Claudia's place. The date is with James Wheeler (Mickey Rourke), one of Claudia's acquaintances, who is mysterious and eccentric, rich and powerful. Sometimes he helps Claudia close her deals and other times he's the wrench in the gears. He latches onto Emily immediately, looking for her weak spots ten seconds after they sit down to dinner together, right before he reveals he called her mother to ask what it is she likes to eat for dinner. Emily is attracted to his antics, but resistant to the idea of mixing business with pleasure. 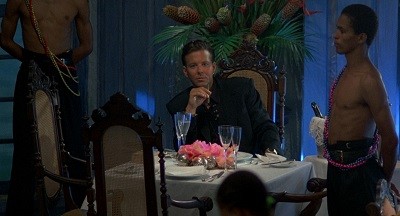 Or, you know, something like that. Frankly, I honestly don't know why Emily and Wheeler resist one another. At times, both characters exhibit a resistance to being touched. She hardly seems attracted to him, and he constantly comes off as creepy and invasive. That would seem like a reason, but all visual and verbal cues presented by King suggests that she is obsessed with him and he is ridiculously suave. Sometimes, her concerns are self-evident: when they first meet, he has her at a disadvantage. She's flustered, unprepared for this new and unusual challenge with a stranger, and she's wearing Claudia's dress, which Wheeler picks up on, because he bought it for Claudia. What she sees in him, however, remains a mystery, as Rourke is at his sleaziest here, all visibly puffy cheeks and almost no charisma. When Emily runs from his Eyes Wide Shut-style sex meetup in terror when a man in a bear costume tries to seduce her, she wakes up the next morning to find him sitting there in her hotel room, just watching her sleep.

On a larger scale, what drives Emily is a combination of sexual repression from her quiet upbringing, to her sexual desire, brought on by the sight of a man and a woman having a "decadent" encounter inside a hotel on an unclaimed piece of the land where her company hopes to build. Later, she goes on an afternoon outing with a couple that Wheeler knows, which is cut short when the woman, Hanna (Assumpta Serna), is nearly raped by a band of sailors. In the limousine, after the attack, Wheeler counsels Hanna into having sex with her bitter husband Otto (Oleg Vidov) while Grace is sitting right next to them. In this ridiculously contrived scenario, Grace is irritated by this but does nothing about it, instead staring at the look of pleasure on Hanna's face. Whenever Grace is staring at or thinking about Wheeler, King cuts back to these two moments, a cheap (but admittedly effective) reminder that she's being overwhelmed with sexual desire. Later, Grace has an encounter with a lawyer (Bruce Greenwood) that adds another layer of complexity (or perhaps confusion) to her and Wheeler's relationship. 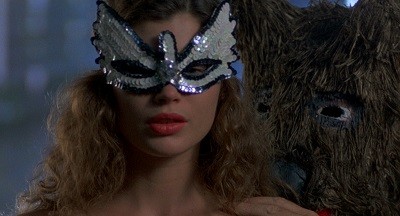 The main problem with all of this is not that it's silly or shallow, it's that it's deathly boring to watch. Otis is not much of an actor, doing little but stare at all sorts of things happening around her instead of expressing some sort of emotional reaction to it. When King inserts the sex flashbacks, it's the sexiness of the memories that generates heat, not the look on her face. Worse, while neither Otis or Rourke pull their weight anyway, the many scenes in which they're separated test the audience's attention span. Bisset provides the film's only element of liveliness, and she too vanishes for the film's deadly middle stretch, before returning for one of the film's few sexy scenes, in which she makes Grace translate while she seduces some stud from the beach. This is also to say nothing of King's half-assed effort in giving the film a dramatic conflict, or the movie's suspect treatment of black actors (the way the camera often lingers on a black little person who serves as the hotel's doorman is very awkward). Wild Orchid is anything but: chop off the first half of the title and it's much more accurate: this is about as sexy as watching plants grow.

The Blu-ray
Wild Orchid arrives on Blu-ray with the poster art essentially preserved, which is almost a disappointment given that it's quite a misleading piece of art (and possibly a bit of a spoiler). The one-disc release comes in a boxy, low-quality Infiniti Blu-ray case, and there is a postcard in the case advertising other Olive Films releases.

The Video and Audio
Quality of the film aside, the 1.85:1 1080p AVC presentation provided by MGM for this Blu-ray leaves nothing to be desired. A fine layer of grain beautifully covers an exquisitely colored transfer, which captures the luminous pink tones of skin down to the pores and fine hairs on the surface. Of the many discs I've reviewed released by Olive, Kino, and Shout!, this is one of the best-looking catalog titles I've come across, with the extremely insignificant exception of a split-second near the end where a line can be seen, and the occasional fleck in the picture. The original photography means there's not much depth to the image, so it does have a bit of a flat appearance sometimes, but in terms of saturation, detail, and fidelity to the source, it's impeccable. 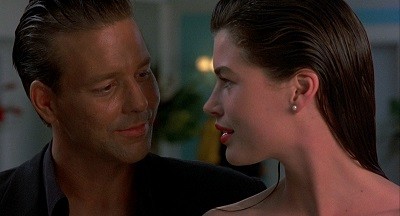 Sadly, the same cannot quite be said for the DTS-HD 2.0 Master Audio soundtrack, which is quite lively and energetic when it comes to the film's score and music, but often seems flat, quiet, and lifeless when it comes to dialogue or sound effects. All too often, I found myself playing with the volume in order to hear what the characters were whispering to one another over the lively sound of a band or the film's score. It doesn't help that the disc contains no captions or subtitles in order to save the viewer this trouble.

Conclusion
Personally, I found Wild Orchid an interminable bore and a real chore to sit through. For me, the film is skippable. That said, the video presentation on the disc is so nice, for that alone I will bump the rating up to a rental, as the film must have some pre-existing fans.