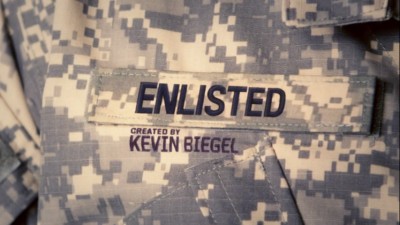 
The Show
FOX has a long history of putting unique, quality shows on the air, doing little to support them and then cancelling them prematurely, sending them off into cult fandom where they live on forever (at least Human Target got a second season.) The latest to receive this treatment is Enlisted, a single-camera sitcom set on a Florida army base, which lasted for 13 episodes (nine of which aired before cancellation came calling.) I cannot claim to have lamented the loss, as I never saw an episode before this set arrived, but having now watched the entire run, I feel I can safely say we've lost out on a promising series that had a solid run.

The show focuses on a Rear Detachment unit in Florida, whose responsibility is to assist the families of soldiers who have been deployed to active service. It's not something we've seen before, and it's also incredibly timely, considering the nation's state of infinite war. Unfortunately, it's also a subject area most people would prefer not to think about, and they are less likely to want to laugh about it, which stacked the odds against Enlisted from the start. However, the ragtag team of neerdowell soldiers under the command of Sergeant Major Donald Cody (Keith David), are goofy enough to make anyone forget about the more depressing aspects of military life, and laugh heartily.

Though David is great as the some-but-not-much-nonsense leader of the unit, the star of the show is Sergeant Pete Hill (Geoff Stults, of the equally brief Ben and Kate and The Finder). A hero in Afghanistan, he succumbs to his temper and gets busted down to working stateside, where he's teamed up with his brothers, human puppy Randy (Parker Young, Suburgatory) and lazy, acerbic Derrick (Chris Lowell, Private Practice). Together, they are a three-person odd couple, but they will have to work with each other, and with the other misfit members of their squad. It's in the supporting cast that they show's greatest strengths lay, with Michelle Buteau, Mort Burke, Tania Gunadi, Kyle Davis and Mel Rodriguez all making indelible impressions, particularly Buteau and Davis, both of whom are just outstanding on this show, popping in with terrific timing and delivery. The only problem with this team is that the great Ron Funches is a part of it in the first episode, only to disappear after that. A true crime that not even defense attorney Ron Funches could argue against. 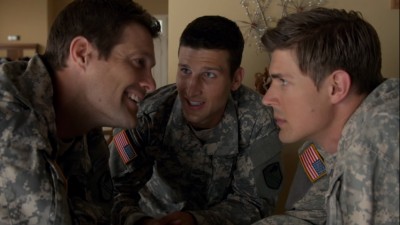 Of course, as with pretty much every sitcom starring a guy, there's a girl, and in this case it's the far more proper Sergeant Jill Perez (Angelique Cabral), who is every inch Pete's equal as a soldier, but she's not dragged down by her squad (though Pete's eventually does the trick for her.) The show didn't last long enough to ruin the tension between the two, but the course was pretty obvious over the first 13 episodes, which makes one wonder where exactly the show planned to go next. With such a wacky group, the interplay between the soldiers could have easily been sustained, with a feel not unlike Community, as these oddball friends are led on misadventures by a handsome, charismatic success story forced by his situation to slum it for a while. The show even has a similar sense of absurdist comedy mixed with heartwarming pathos, though the base at Fort McGee is far more grounded than Greendale Community College ever was (even with scenes like a Donkey Kong-inspired candy raid and a series of superhero introductions.)

Speaking of that pathos, Enlisted did a fine job of handling the topic of the families left behind when soldiers go to war, as well as the effects of military life on a soldier, with the three main brothers continuing to feel the effects of losing their father at a young age, while Pete experiences issues with his emotions and memories from being at war that lead him to seek help, a moment the show avoids playing for laughs, and even returns to over the course of the series. But despite the heavier, more heartfelt elements, which are effectively sprinkled throughout the show, the laughs are never far away, and the show earns its laughs. 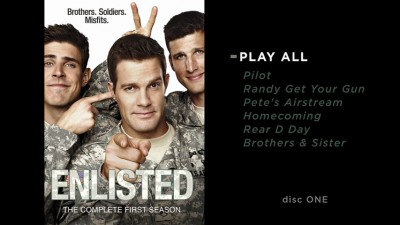 The DVDs
The first and only season of Enlisted is spread over two DVD-Rs, which are packed into a standard-width keepcase with a tray. The DVDs offer static widescreen menus with options to play all the episodes or select shows. There are no audio options, but closed captioning is available.

The Quality
The anamorphic widescreen transfers are good, but not great, bringing a good level of fine detail, appropriate color and nice deep black levels to the party, with little to no concern about compression artifacts. Things can look a bit soft in parts, but overall the episodes look fine for standard definition.

The Dolby Digital 5.1 soundtracks on these episodes are solid, with the surrounds mainly used for musical enhancement, while dialogue is found front and center. There's some minor low-end activity during the music, particularly when military drums are involved. Otherwise, it's a clean, but unspectacular-sounding delivery.

The Extras
Disappointingly, but predictably, these MODs are DOA when it comes to bonus content. 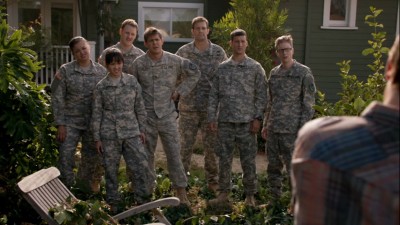 The Bottom Line
Enlisted was a solid sitcom that got a raw deal all around, while lesser series flourish. One expects though, that like similarly snuffed-out shows, the people involved will be back with greater projects. Until then, these 13 episodes can be enjoyed by new discoverers and old fans alike. The quality is quite nice, though there are no extras to be had, and, like similar sets, the price is relatively high. Give this show a chance, and you'll be surprised at how good a one-and-done series can be.