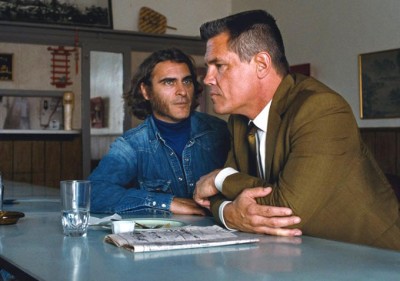 It is often said that certain books are "unfilmmable." Whether it's an issue of length (Infinite Jest, for instance) or the way the author approaches language as an essential part of the telling (James Joyce's Ulysses), there are novels that just don't lend themselves to the cinema. Which doesn't always stop filmmakers. The Wachowskis and Thomas Tykwer tackled David Mitchell's stylistically ambitious Cloud Atlas and ended up pleasing many of that book's fans (including me); whereas six years earlier, Tykwer tackled Patrick Süskind's Perfume and basically fell on his face. No one is sure what he was expecting. Even Stanley Kubrick failed to crack that tome. And he adapted Lolita.

While such a distinction may not be entirely uncommon for books themselves, I'd say it's much rarer for an author himself to defy all cinematic classification. Though if anyone definitely fit that "unfilmmable" category, it's the man behind Gravity's Rainbow and The Crying of Lot 49, Thomas Pynchon. Until now, at least, with Paul Thomas Anderson's confounding and marvelous version of Inherent Vice, Pynchon's 2009 send-up of Los Angeles and the detective story. It's a truly grand meeting of the minds. The auteur who dramatized Scientology (The Master) and whose earlier works (Boogie Nights, Magnolia) cast a similar withering glance toward La-La Land has found a kindred spirit. 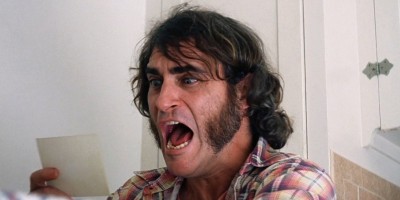 Inherent Vice stars Joaquin Phoenix as Doc, a perpetually stoned private investigator living by the beach in Southern California in 1970. As many detective stories do, this particular narrative kicks off with a girl entering Doc's office--or, in this case, returning to his apartment. Shasta (Katherine Waterston) left Doc and broke his heart, but now she needs his help. She wants him to stop the wife of her current boyfriend, a powerful real estate developer (played by Eric Roberts), from cheating him out of his fortune. Doc takes the case, but unsurprisingly, things go wrong rather quickly, with one of the man's bodyguards (a member of the Aryan nation) murdered and the man himself kidnapped. And Doc possibly on the hook for it. Especially if his longtime nemesis, a police detective nicknamed Bigfoot (Josh Brolin) who moonlights as a would-be cowboy actor, has anything to do with it.

Already you can see how complicated this thing gets, and everyone's just getting warmed up. Anderson is corralling an extensive ensemble cast here, with each new piece of evidence introducing new suspects and added confusions. Throughout the movie, Doc is hired by no less than five different people, including a wife (Jena Malone) who wants him to prove her husband (Owen Wilson) is alive, and the same husband who wants Doc to check in on his wife for him, since to do it himself would risk exposure. You practically need a scorecard, as they say, and particularly here where all the characters are connected. Nothing seems to land in Doc's lap by accident.

And yet it all is simply happenstance. Inherent Vice is a sly parody of the usual detective tale. Anderson and Pynchon are playing with how the genre's heroes tend to stumble into trouble, and how once they are on the case, weird coincidences reveal puzzle pieces and expose truths. The funny thing here is that since Doc is stoned all the time, he can never tell if he's legitimately figured out a connection or is just paranoid. Most people, including Bigfoot, the FBI, and Doc's sometime girlfriend, Penny (Reese Witherspoon), a straight-laced district attorney with a thing for bad boys, think it's the latter, creating a sort of forest for the trees scenario. Inherent Vice is meant to feel like a careening mess of a film. The audience is supposed to be just as confused as Doc, and just like him, every time we think we've figured it out, things change and the meaning escapes our grasp. 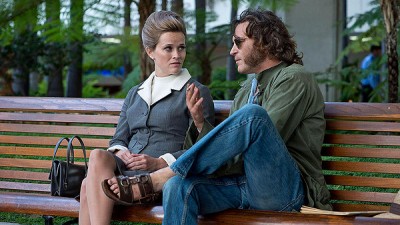 Except that's all just the tricks of an expert prankster. While absurd humor and bizarre digressions are meant to distract and obfuscate, Inherent Vice is not so hard to put together as all that--not in terms of plot, at least--particularly once you surrender and go with the flow. Doc's predicament is a bit like a black hole: its suction is dragging everything toward a single dumping ground.

With other filmmakers, one could imagine Inherent Vice careening off into nonsense or collapsing under its own weight. (The presence of Benicio Del Toro as a shady lawyer brings Fear & Loathing in Las Vegas to mind, and the mind boggles at what a mess current-day Terry Gilliam would have made of this one.) Paul Thomas Anderson, however, has a firm grasp of the material and is in control of every moment. It takes a lot of planning to concoct this convincing an illusion of randomness. Perhaps that's way some of the more broad jokes don't always work (that bit where Phoenix screams while looking at a photo is just as stiff in context as it is in the trailer); those are the only times where Anderson appears to be faking it. His real talent here is in utilizing his environments and his actors. His long takes may not be as ambitious or as perfectly choreographed as those in Birdman, but Alejandro González Iñárritu never manages the same emotional power. There's a tremendous scene where Waterstone's Shasta lays herself bare, both literally and figuratively, slowly seducing Doc and the camera simultaneously, that becomes a hire-wire act where the wire is razor sharp and the skin raw. 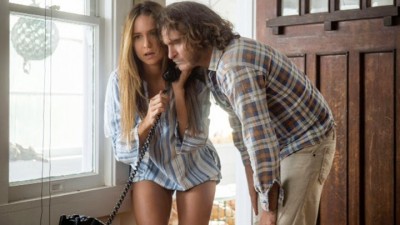 Anderson's strength is in managing to be both hyper-real and surreal at the same time. It's like that scene in Boogie Nights with Alfred Molina, when everything takes on this intense air, at once authentic and yet very contrived, both scary and insane. There is a similar sense of threat here, whether it be in the Austin Powers-ish office of a pedophile dentist (Martin Short) or Doc confronting an enforcer (Peter McRobbie) in what is essentially a shrine to baseball bats. In both cases, the underlying truth, the possibility of violence and menace, feels very real, even if the trappings are outlandish. It's a skill the director picked up from one of his heroes, Robert Altman, whose Raymond Chandler deconstruction The Long Goodbye provided much of the style guide for Inherent Vice (much as Altman's Short Cuts created a sartorial blueprint for Magnolia). It's a balance of fuzzy logic and maverick vision.

Which you could say is the real satirical genius of Inherent Vice. The ridiculous names and the groovy fashion and the omnipotent voiceover from an unseen admirer of Doc's (and provided by signer Joanna Newsom) entertain and amuse while Anderson surreptitiously takes us deeper into places we might not otherwise want to go.

Inherent Vice is a fascinating achievement. As with The Master and Punch-Drunk Love, the entry in the filmmaker's oeuvre that Inherent Vice most closely resembles, it's the sort of thing that may take several viewings to fully appreciate, even if it might seem like a completely different movie every time you partake. I'm still sorting it all out...while also checking showtimes for when I can go back again. 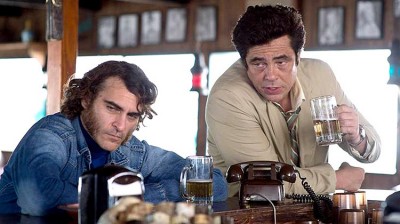