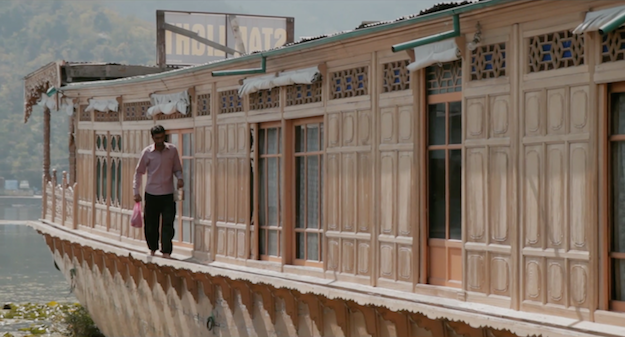 The sweetly intimate and gorgeously photographed Valley of Saints is the labor-of-love debut feature from Kashmiri-American filmmaker Musa Syeed. The film is set on Dal Lake in Kashmir, a naturally beautiful landmark and tourist attraction that has lost some of its luster over the years due to illegal building and pollution. Though this film about the people who live on the lake was ostensibly made by outsiders -- a core crew of Americans that barely spoke the Kashmiri language -- Valley of Saints shows an astonishing empathy and sensitivity toward the humble lifestyle and milieu of its characters.

The hero of the film is a boatman named Gulzar (Gulzar Ahmad Bhat), who makes his wages taking tourists out on his taxi boat, known as a shikara, to see the sights of Dal Lake. Bhat, who is a real-life boatman and not a professional actor, nonetheless has a natural screen presence, with an open face and kind eyes. We feel for his character as he hustles tourists to ride in his shikara, inevitably meeting with plenty of resistance and indifference.

When Gulzar's uncle leaves town to go to a wedding, Gulzar and his rakish buddy Afzal (Afzal Sofi) decide this is their window of opportunity to hop on a bus and flee Kashmir. Unfortunately, violence at pro-Kashmiri Independence protests in the nearby city of Srinagar leads to a military crackdown and a weeklong curfew. The curfew prevents those who live on the lake from entering the city or traveling beyond. This leaves Gulzar and Afzal with plenty of time to kill. Initially, the pair act like kids who have been given a snow day, and the rapport between these two men as they horse around near the lake is quite charming. The confident Afzal is maybe a little too mean to his buddy, which oddly makes their dynamic feel utterly realistic and believable.

Soon, Gulzar finds out that a beautiful young woman has been left stranded in one of the tourist houseboats on the lake, with her host stuck in Srinagar because of the curfew. The woman, Asifa (Neelofar Hamid), is a visiting scientist who is collecting research on the polluted lake to determine its resilience. Asifa has a cold demeanor, but Gulzar is nonetheless smitten and offers to take her out on his boat to collect more data. Afzal comes along and inevitably gets a bit jealous after unsuccessfully trying to snag some of the scientist's attention. 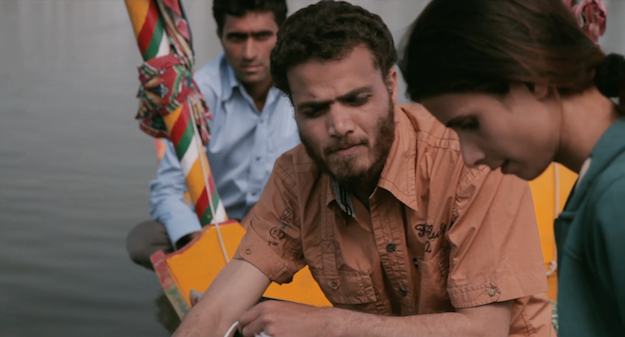 In many ways, the plot of Valley of Saints is secondary. Nothing unusual or startling happens in the story once we know the set-up -- and that's not meant as a slight. Director Syeed and his cinematographer Yoni Brook have a background in documentary work, and this film is an unqualified success largely due to the way it can resemble a fly-on-the-wall documentary, capturing the way people interact with minimal artifice for the benefit of the camera. Considering that the film was shot during genuine unrest in Kashmir, with real riots occurring and a real curfew in effect, the filmmakers clearly allowed the events around them to blend seamlessly into their fiction.

Still, the film is not a fiery exposé of the conflict in Kashmir, any more than it is a passionate Hollywood romance. Instead, it is a subtle, deftly executed character study. The hang-out scenes between Gulzar and Afzal frequently had me laughing harder than most of the traditional comedies I've seen lately. The affection that grows between Gulzar and Asifa as they spend more time on the lake is consistently sweet and engaging. The lyrical moments capturing the scenery and the inhabitants around Dal Lake are beautiful and quietly insinuate the value of this place to its main character.

Alright, let me be candid for a moment. At first glance, Valley of Saints looks like the kind of movie that I would typically skip. A film set in this locale with this subject matter might potentially be too pretentious or depressing or boring. Thankfully, this movie is absolutely none of those things. Instead, it is engrossing, entertaining, and great to look at. (Not for nothing, this flick won the Audience Award for World Cinema at the Sundance Film Festival and it also received an Independent Spirit Award nomination for Best Cinematography.) Valley of Saints is a hidden gem well worth uncovering.

Valley of Saints opens theatrically in New York City on January 9. It will be available from iTunes starting on January 20. 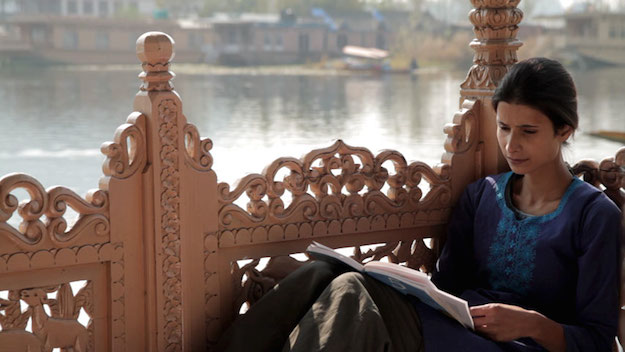