Captain Scarlet and the Mysterons - The Complete Series

Timeless // Unrated // February 10, 2015
List Price: $29.93 [Buy now and save at Amazon]
Review by Stuart Galbraith IV | posted February 23, 2015 | E-mail the Author
Captain Scarlet and the Mysterons (1967-68) is a disarmingly charming and impressively elaborate puppet series produced by Gerry and Sylvia Anderson in their emblematic "Supermarionation" process. The Andersons did eight Supermarionation shows in all, from 1960-69, and in some respects Captain Scarlet is the best of these.

Lavishly produced for Lew Grade's ITC Entertainment, like all of the Andersons' later shows (and ITC's TV programs generally) Captain Scarlet has the polish of a big-budget feature film. Their shows were justly famous for their incredibly detailed and sometimes almost photo-real miniatures and other visual effects. These were supervised by Derek Meddings, who later worked on the Andersons' feature film Doppelgänger (aka Journey to the Far Side of the Sun, 1969), numerous James Bond films, as well as Superman (1978).

Thunderbirds (1965-66), a sci-fi series about a top-secret life-saving organization called International Rescue (and their high-tech rescue vehicles and hardware), was the Andersons' biggest hit. That program was a sensation in its native Britain, and hugely popular in many other parts of the world, particularly Japan. Its success led to the production of two feature film adaptations: Thunderbirds Are Go! (1966) and Thunderbird 6 (1968). So big was the Thunderbirds craze at the time of its release, a United Artists representative reportedly told Gerry Anderson that it might "make more money than Bond." 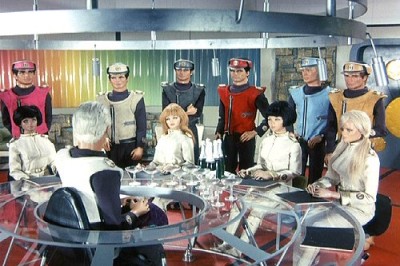 Inexplicably, Lew Grade was unable to sell Thunderbirds to an American network. Rather than continue with that series, Grade instructed the Andersons to try again, with a new series that might have better luck attracting American interest. The result was Captain Scarlet and the Mysterons. Compared to Thunderbirds, Captain Scarlet is darker and less humorous, while the puppets themselves are significantly more realistic and less cartoonish.

Hardcore fans of the Andersons' programs almost invariably point to Thunderbirds as the Supermarionation high-water mark, though overall this reviewer prefers Captain Scarlet. It lacks its predecessor's humor but also some painful English stereotypes present in Thunderbirds, while the later show gives its female characters less decorative, more proactive roles. (It's also the only one of the Andersons' shows to feature a black character in a major role.) Another big difference is that where Thunderbirds's episodes ran a padded 50 minutes, Captain Scarlet's are a tauter 25. The results are action-packed episodes that help hide the basic weaknesses of teleplays. (More on this below.)

The series remained unseen in the U.S. for years, eventually turning up on VHS tape in the form of several faux feature film adaptations, compiled from reedited episodes. Timeless Media's Captain Scarlet and the Mysterons: The Complete Series is a mostly excellent set of all 32 episodes plus numerous extra features on four single-sided discs, all packaged into casing the size of a regular DVD.

The series takes place in the year 2068. In the first episode, astronauts on Mars discover an automated extraterrestrial base years before abandoned by the Mysterons, beings from another part of the galaxy. Intriguingly, the earth astronauts mistake a harmless sensor device from the Mysterons' still-operating sentient computers as an act of aggression. The humans try to destroy the base, only to watch as it effortlessly regenerates itself. The Mysterons, or rather their sentient computers, declare war on Earth, killing the astronauts and duplicating one of them, Captain Black (voiced by Donald Gray), to act as their primary fifth columnist.

Episodes revolve around the International Rescue-like Spectrum Organisation, operating from an airborne headquarters and aircraft carrier, Cloudbase, as they combat the Mysterons' various assaults on major urban centers and plots to assassinate or assume the identities of various world leaders and scientists.

The title character, Captain Scarlet (Francis Matthews), is another Spectrum agent killed and replaced by the Mysterons. However, in the first episode the replicant Captain Scarlet is temporarily killed only to return to life with its original human consciousness, and freed from the Mysterons' mind control. Further, he has retained the aliens' retro-metabolism, rendering him virtually indestructible. In most episodes, he survives certain death from falls, explosions, bullet wounds, etc. only to quickly return to normal.

The biggest problem with all of the Andersons' shows is that their extraordinary technical virtuosity trump all else. The limited expressiveness of the puppets' facial features and the general sameness of their standard heroic features render them pretty interchangeable, especially for more casual viewers. (Why not give one an eye patch, or maybe a distinctive limp?) In Captain Scarlet, this is true of all of the Angel pilots, who have virtually no individual personalities at all, as do the captains and lieutenants serving under Colonel White.

The Andersons might have avoided some of this stiltedness had, for instance, the voice actors been allowed to embellish their characters with more distinctive, colorful voices, but they seem to have been instructed to perform as generically as the puppets. Further, story editing and line producing from the scripting side of things was not one of the Andersons' strengths. Though full of visually arresting action, almost never is there an attempt in any of the Anderson-produced shows to flesh out its main characters in any kind of meaningful, lasting way. When they gave up puppets for human actors on their later shows, U.F.O. and Space: 1999, those programs had exactly the same problems. Visually, they looked spectacular, better than any science fiction show on television (including Star Trek), better even than most feature films. And yet the human characters that populated those shows were like cardboard, as unreal as the Andersons' earlier puppets. On Space: 1999, co-star Barbara Bain even moved like a marionette, with less range than Thunderbirds' Lady Penelope. No wonder their shows were such an easy target for parody.

But Captain Scarlet and the Mysterons, partly because of that shorter running time, partly because its visual ingenuity is so captivating, holds up better than some of their others. (For this reviewer it's still the best overall from a technical perspective, though personally I like 1962-63's Fireball XL5 best. That more lighthearted series gently and affectionately spoofs all the genre clichés of 1950s science-fantasy without ever mocking it. For genre fans it remains delightful.)

While one would have preferred to see Captain Scarlet and the Mysterons debut on Blu-ray rather than as another DVD reissue, Timeless Media's Complete Series set is quite nice. The thirty-two, 1.37:1 standard size episodes are spread across four single-sided discs. The transfers look more than a few years old but are acceptable, with decent color and contrast. Though mentioned nowhere on the packaging, the original mono audio has been aggressively remixed to stereo, with much-added directionality. For scene transitions, a seven-note kettledrum (I think) musical motif was used, and here each strike of the drum is directed to a different speaker, creating an interesting aural effect. No alternate audio or subtitle options and the discs are region 1 encoded.

The Andersons and/or ITC exhaustively documented the making of all their Supermarionation shows, so there's a wealth of fascinating material in this set. Included are three featurettes, "The Puppets," "The Writing," and "The Directing," as well as an interview with Gerry Anderson, who died in 2012. Also included are audio commentary tracks on two episodes, "The Mysterons" and "Attack on Cloudbase."

A very enjoyable series whose technical accomplishments still impress, Captain Scarlet and the Mysterons is Recommended.