Supermarionation space race shenanigans, in black and white (terms). ITV Studios Global Entertainment (with Timeless Media Group's help), under their Gerry Anderson Collection banner, has released Fireball XL5: The Complete Series, a 5-disc, 39-episode collection of the 1962 U.K. "Supermarionation" puppet show from Gerry and Sylvia Anderson's AP Films (...or from Sir Lew Grade's ITC, if you want to get technical). The last black and white series from Anderson, and the first and only one to get a U.S. "Big Three" network run (okay...on NBC's Saturday morning line-up, but still...), Fireball XL5 was a big hit with space-happy kid audiences when it first debuted, but for whatever reasons--and no, being shot in black and white isn't necessarily one of them--it hasn't maintained as high or lengthy a pop culture profile as other seminal Anderson works like Stingray or Thunderbirds. Seen now, it's agreeably simple and straightforward, and beautifully designed: juvenile sci-fi fantasy work that may be nicely nostalgic for older viewers, and reasonably diverting entertainment for today's very small fry. A few extras are included with these absolutely pristine fullscreen black and white transfers. 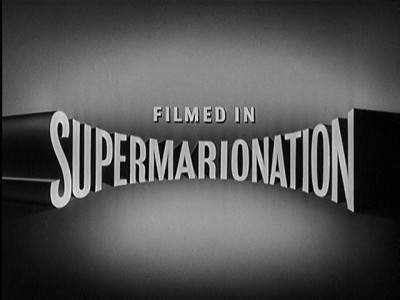 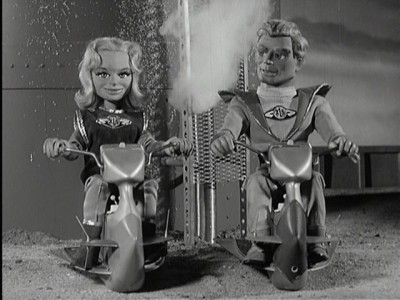 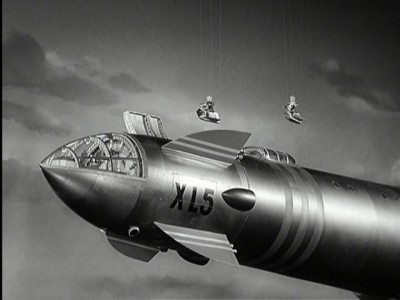 A couple of months ago, I put a review out for the Andersons' Stingray series. As I wrote in that piece, like a lot of guys my age, my main connection to Gerry Anderson's world of Supermarionation puppetry was his masterwork, Thunderbirds. But as to other Anderson Supermarionation offerings like Captain Scarlet and the Mysterons or Joe 90, I was pretty much in the dark (they either didn't get much play here, or I missed them). And what appealed to me with Thunderbirds wasn't the actual Supermarionation process of "animating" the marionettes--frankly, as a kid with a hard-earned model car/airplane/tank/diorama collection, I was more interested in the intricate-looking model work of the sets and vehicles and futuristic buildings, than I was in the rather clunky, wire-laden puppets. Those puppets' visual appeal, though, is palpable, and connected right to our adolescent play-mode subconscious: the marionettes' jerky movements exactly replicate how we played with our own toys, becoming more "alive" on the screen without our own mitigating hands. Reading up on Supermarionation now, it is rather fascinating to realize how hi-tech those marionettes actually were, with solenoids inserted in their oversized heads that triggered synchronized mouth movements to the pre-recorded voice tracks transmitted down through their control wires (who knew?). I just thought someone was yanking a wire back and forth, making their mouths move like a ventriloquist's dummy. 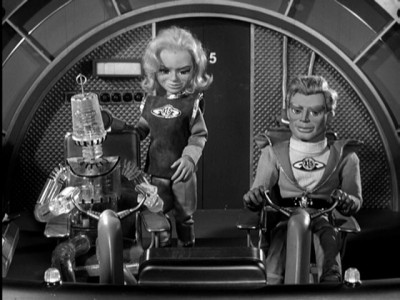 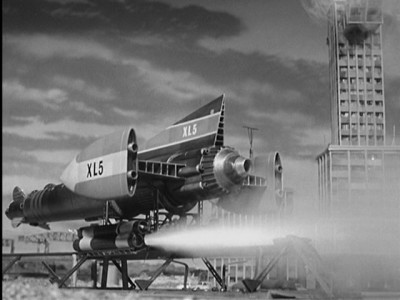 Watching Anderson's shows now, I can more fully appreciate the extensive effort that went into synching up all the details of the impressive production--not just the marionettes' mouth movements, but all of the effects, including moving the dolls around, and the impressive, consistently imaginative production design, direction, and editing of these little half-hour sci-fi adventures. I have found memories of occasionally catching Thunderbirds when I was quite young (broadcast from a station in another city we could sometimes get with our rooftop aerial...if it was raining). I've seen it a few times since then, and it never fails to entertain me...briefly. Fireball XL5, which came out before Stingray, which was before Thunderbirds, is certainly less ambitious technically that those Anderson shows that followed. Anderson's technical progress was fairly impressive, considering his rinky-dink Lew Grade budgets--had he American TV network money, who knows what he might have accomplished. But Fireball XL5 still satisfies that nostalgia-driven rush of childlike pleasure when an adult viewer sees some cool models and funny-looking puppets moving around in herky-jerky fashion on the TV screen. However, there are remnants of your pop culture history that were perfectly acceptable to watch as a child, or cool and cute (and faux-ironic) to watch in your twenties...but which now feel a tad, um...juvenile when you're pushing 50--no matter how much you loved it when you were a kid (everyone knows that even Gerry Anderson, who repeatedly tried for a big-screen live-action career, was more than slightly embarrassed at having to repeatedly work on what amounted to kiddie shows with dolls). 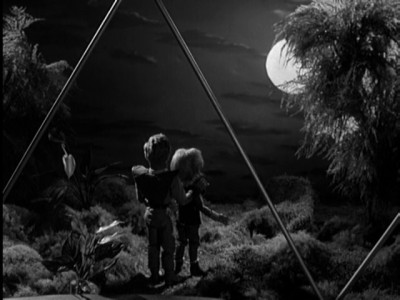 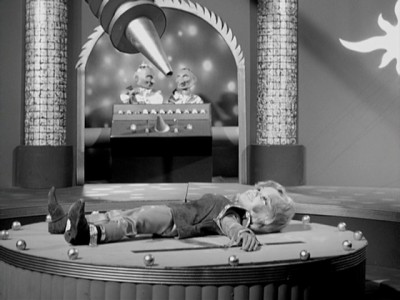 That probably reads more negatively than it should, because Fireball XL5 is a lot of fun; it's just...kiddie fun. You can enjoy it well enough, but not in the same way you can thoroughly and repeatedly enjoy something equally "juvenile" like peak-years Looney Tunes cartoons or the equally brilliant The Bullwinkle Show. After all, no matter how many grown adults now defend these Anderson shows, our parents wouldn't have been caught dead watching these with us; they were never intended for the adults viewers of those times. Nor were they ever meant to be taken all that seriously. Fireball XL5's crisp, pristine black and white production design is the first thing that grabbed me. Like some ghostly, long-lost TV transmission from another time period, the look of Fireball XL5 is so reminiscent of not just seminal sci-fi outings like Destination: Moon or TV's The Outer Limits or The Twilight Zone, but of all my early television watching on my little 13-inch black and white Curtis Mathes, it felt like I had watched it all before...even though this was my first time. While there aren't nearly as many elaborate "hardware" set-ups as later Anderson outings (the sparse Space City and the XL5 are the only recurring hardware sets, with the various more modestly-designed planet settings and their buildings acting as "atmosphere"), the budget-imposed simplicity adds an amusingly ironic, sleek modernist tone to the show. 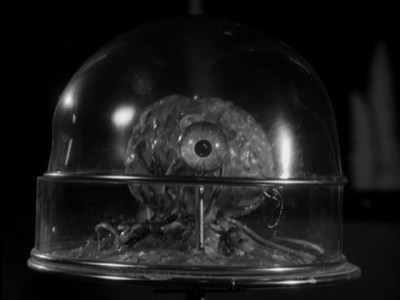 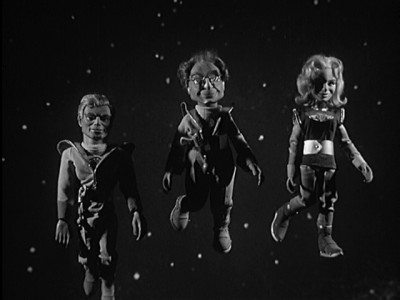 The old school comic book storylines are less sophisticated than the production design, frequently falling into the same pattern: the U.N.-like World Space Patrol recognizes a threat from an alien civilization, sending in Steve Zodiac and team to neutralize it...before almost getting themselves killed. And no, there isn't a lot of depth to the characters here since they're deliberately designed as action/adventure stereotypes that kids would have easily recognized back in the early 60s. Speaking of stereotypes, I've read a few other critics' take on Fireball XL5's "gender politics" (can you imagine?), politics which most of them deem as toxic. At the risk of another angry post from that guy who thinks I'm a terrible husband and father (hee hee!), I don't find it offensive that Steve asks Venus to get the coffee in the first episode...and neither did my wife (she found it hilarious...as she was bringing me another highball). But then again, I don't score cheap, facile points by taking decades-old pop culture piffles like Fireball XL5 and humorlessly holding them to today's societal standards--particularly when today's so-called "more enlightened" standards are just as much hypocritical bullsh*t as the notion of medical doctor Venus sometimes acting like a secretary of old (case in point: the current frontrunner for one of our political parties--a laughably-acclaimed "feminist hero" to the drones who support her--owes her entire political career to shrewdly maintaining her "marriage" to an even more powerful male political figure...a despicable figure also ironically revered by feminists, despite his numerous tawdry "transgressions"). Besides...Steve later defends Venus to Matic, saying she has brains as well as beauty, before another episode where he comes to the same conclusion most guys eventually grasp: she's smarter than he is ("What a girl! I should know better than to argue [with her],") 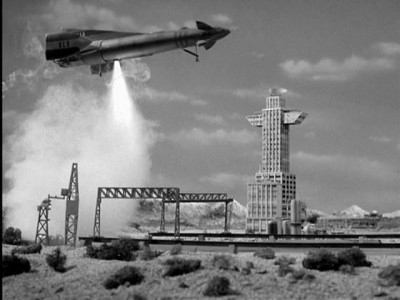 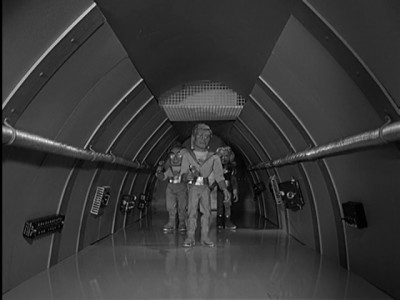 That kind of silliness aside, there's more than enough genuine-but-well-meant daftness in Fireball XL5 to keep you amused. It's fun to try and see who the characters are modeled on. To me, Steve looks like a Lloyd Bridges/Jeff Chandler combo; Mattic is Nehemiah Persoff's and Barry Morris' love child, and Venus is a Carroll Baker/Zsa Zsa Gabor amalgamation (Robert the Robot looks like a Reddy Kilowatt/plastic restaurant salt shaker hybrid). Everyone laughs at the notion of "oxygen pills" keeping the suit-and-helmet-less astronauts safe in space, but just as amusing is their method of locomotion in a vacuum: kicking their little feet. Numerous comments about human hands mocked up as the marionettes' are a point of debate with fans of Anderson's shows, but in the case of The Triads, it's a beautifully surreal moment of unintended self-reflexivity, when Steve and the gang, comparatively small next to their hosts, are picked up by Graff and Snaff, giving us a cool, unique sense of the marionette's actual sizes and scale within the sets. The painted, puckered backdrop to Space City is a hoot whenever it's shown during XL5's launch...which is at least three times an episode. How the hell does Matic concentrate with that desk revolving counterclockwise to him? Good luck answering the phone.... Commander Zero stating without a hint of irony that there are no such things as a flying saucer--in a show full of them--is a highlight. Are there no batteries and flashlights on the futuristic XL5? Because when the power goes out, they break out...the candles. Favorite villains include The Trollenberg Terror-like eyeball in a jar in Hypnotic Sphere; the two bitchy queens who flip their little flippers in Space Immigrants (when they squealed "Earth savage!" I hit the floor); the Siegfried and Roy clones in XL5 To H2O; and the show stopper: The Last of the Zanadus's Kudos, who looks like a wild-eyed Anthony Newley in a cocktail dress and one of Joan Collins' wigs. Least favorite villain? No question: the gawd-awful Zoonie the Lazoon, who's certainly a villain to me (and to "good taste") every time he croaks that painfully unfunny, "Weeeeeellllllcome Hoooooommmmme" (is that fleas, an epileptic fit, or autoeroticism for spastically humping Zoonie, poor thing, in The Sun Temple?). With that kind of delightful nonsense happening at least a few times in most of Fireball XL5's episodes, it's pretty easy to unapologetically accept this kiddie show on its own merits. 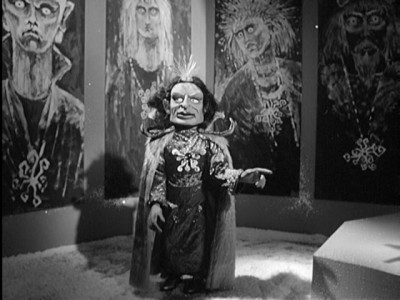 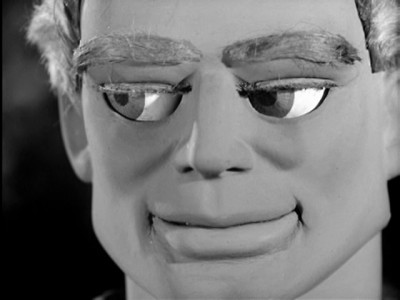 The Video:
The fullscreen, 1.37:1 black and white transfers for Fireball XL5: The Complete Series are remarkably clean and bright, with a creamy gray scale and almost zero damage to speak of--they look like they were shot yesterday.

The Extras:
New to this collection is a Gerry Anderson interview, running almost 12 minutes, where he discusses the origination of Supermarionation. Director Alan Patillo delivers an informative commentary track on Space City Special (one of the better, more self-aware episodes in the series), while voice talent David Graham speaks up on The Doomed Planet (uh...okay). The Noble Art of Fireball XL5, with Mike Noble (17 minutes and change), is a cool look at all the merchandising associated with the show, as well as Noble's artwork. And finally there's a printable original publicity brochure in a pdf on disc one (I didn't bother). Very nice extras.

Final Thoughts:
Fun...with strings attached. Not as ambitious ideas-wise as follow-up Stingray, Fireball XL5 still charms, thanks to its simple-yet-nicely designed production and that velvety, strangely ethereal black and white world it creates (to those who say the show didn't make it in syndication because of this factor, I would direct you to any TV "dial" today to watch I Love Lucy, The Honeymooners, The Munsters, Leave it To Beaver, and The Twilight Zone--they're still playing somewhere). Goofy, juvenile fun, if you're of a mind for it. I'm recommending Fireball XL5: The Complete Series.