That Man from Rio / Up to His Ears

Cohen Film Collection // Unrated // April 14, 2015
List Price: $49.98 [Buy now and save at Amazon]
Review by Stuart Galbraith IV | posted April 30, 2015 | E-mail the Author
Reviews for That Man from Rio (1964) and Up to His Ears (1965), similar but unrelated adventure-comedies starring Jean-Paul Belmondo and directed by Philippe de Broca, tend to describe them as James Bond-type spy spoofs, while Judith Crist, in her review for the New York Herald Tribune called it "a good movie about bad movies." Both of these comparisons and most others are inapt, way off.

Rather, about halfway through the first picture, That Man from Rio, it finally hit me what de Broca was aiming for: Belmondo as a French Buster Keaton. Throughout both films are situations, characterizations, and sight gags that would have been right at home in Keaton classics like The Navigator (1924) and Seven Chances (1925). These aren't spy spoofs so much as new Buster Keaton-type movies incorporating 1960s interests.

Belmondo is a wonder. He very clearly performs nearly all of the innumerable dangerous-looking stunts himself, without a double, and by all appearances with nary a lifeline should anything go horribly wrong. Some of these high-wire stunts seem to have been accomplished with simple camera trickery along the lines of what another silent clown, Harold Lloyd, did in movies like Safety Last (1923) and Feet First (1930). But, unmistakably, most of what Belmondo puts his body through is quite incredible.

Further, the two movies have many other attributes: gorgeous co-stars (Françoise Dorléac in the first, Ursula Andress in the second); stunning, at times startling location work; lively scores, etc. That Man from Rio is superior to Up to His Ears because of its better-constructed, more involving plot, though what Up to His Ears lacks is compensated somewhat by its charming, Karl Zeman-esque approach. (Reader Sergei Hasenecz adds, "Which is why it should be no surprise that the Russian professor speaks French. In the Russia of the 1880s, speaking French was part of a good education for the upper classes, hence a Russian professor would speak it. But this is also a wink at adventure story cliches in general, where foreign characters almost always speak the hero's language.")

Their current owners restored both in 2013 and each looks splendid, plus the two Blu-ray discs are fairly packed with extra features. It's one of the best Blu-ray releases of 2015. 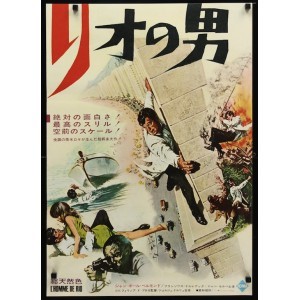 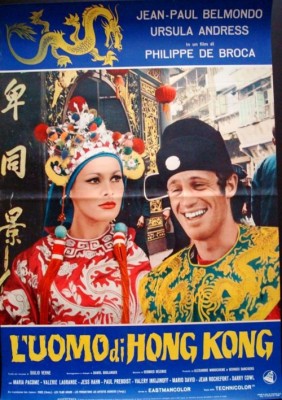 In That Man from Rio (L'Homme de Rio) Belmondo plays Adrien Dufourquet, a soldier on an eight-day leave to spend with his fiancée, Agnès (Françoise Dorléac). Just as his train is pulling into Paris, however, two South American Indians from the presumed lost Maltec civilization steal a statuette from a museum. They also kidnap Agnès and scholar Professor Catalan (Jean Servais, Rififi). Agnès's father and Catalan had discovered three such statuettes some years before up the Amazon. Agnès's father was murdered soon after, but not before burying his statue on the grounds of his residence in Brazil. The thieves may also be planning to steal the third one, in the possession of industrialist Señor De Castro (Adolfo Celi, Thunderball).

When Agnès is kidnapped, Adrien madly pursues halfway across the world to Rio de Janeiro. He has no money, no passport: just the clothes on his back. But with the help of a Brazilian bootblack Sir Winston (Ubiracy de Oliveira), Adrien miraculously tracks down Agnès, and together they try to unravel the secret of the three mysterious, ancient artifacts.

In Up to His Ears ( Les tribulations d'un Chinois en Chine , or "The Tribulations of a Chinese in China"), from Jules Verne 1879 novel, Belmondo is Arthur Lempereur, a bored, suicidal millionaire vacationing in present-day Hong Kong with his fiancée, Alice (Valérie Lagrange), her mother, Suzy (Maria Pacôme), and her consort, Cornelius (Jess Hahn). Word arrives that his company has gone bankrupt, so Arthur plots another suicide attempt, but longtime counsel Mr. Goh (Valéry Inkijinoff, Storm Over Asia) instead suggests Arthur take out a $2 million insurance policy: he'll plot a painless murder for Arthur, with he and Alice splitting the claim.

Arthur goes along with this for a time, but eventually decides he'd rather go on living, especially after meeting a beautiful Hong Kong strip-tease artist, Alexandrine Pinardrel (Ursula Andress). However, assassins that Goh apparently has hired chase Arthur and his butler, Leon (Jean Rochefort), across Asia to Katmandu and the summit of Mt. Everest.

Both movies dazzle. In the real world, if one is chasing a fleeing car, one tends to give up after a few hundred meters. But in Buster Keaton's universe, he simply runs like mad and never stops. He'll grab a motorcycle cop's bike, leap onto a grazing horse, or hop into an idle airplane and take her off, whether or not he knows how to fly it. In these films, Belmondo behaves in precisely the same manner. Like Keaton's great films the obstacles standing between him and rescuing the heroine or getting away from the bad guys are innumerable. But whether it's runaway boulders and jilted prospective brides (as in Keaton's Seven Chances) or Chinese assassins aboard a convoy of Coca-Cola trucks (as in Up to His Ears), the set-up is basically identical. Belmondo's characters fling themselves from one rickety watercraft to the next (often landing in the drink) and even ricketier high-rise construction scaffolding. He clings off the sides of buildings and mountain faces, dives headlong through glass windows, leaps onto the roofs of speeding motorcars, jumps from airplanes, dangles from rope bridges and, no matter what happens, never lets up.

Watching this double-bill it's difficult not to think of the contrast between Belmondo and today's pampered movie stars. Even in the mid-1960s, it's hard to imagine that the producers would have allowed so big a star as Belmondo to do virtually all of his own stunts; companies insuring such expensive productions rarely permit this sort of thing. But would today's toughest movie tough guys do even half the things Belmondo does in these pictures? Clearly some of the stunts don't quite come off as planned; sometimes Belmondo lands flat on his face or nearly falls off a half-built, high-rise building. And even if one suspects hidden cables and whatnot are present to prevent the actor from falling, at times, 10 or more stories, it's still him, there, dangling from 10 or more stories. No green screen here.

Likewise, Françoise Dorléac (especially) and Ursula Andress function very much like Keaton's heroines. They're basically props, something for Belmondo's characters to drag hither and yon, and in the former's case, to occasionally gum up Adrien's ingenious attempts to get them out of one jam after another.

Both features have this welcome air of unreality, a blithe lack of interest in needing to be realistic all the time. In Up to His Ears, there's a scene where Arthur meets a famous Russian professor deep in the mountains of Tibet. "Do you speak French?" asks Arthur. "Of course!" he replies, a big ear-to-ear smile on his face, "I'm Russian!" That film especially, in adapting Jules Verne, seems to follow the example set by Czech filmmaker Karl Zeman. Though set in 1965, all of the major and some of the minor characters wear costumes and hairstyles more in line with the late 1800s. (Reader Sergei Hasenecz notes, "Which is why it should be no surprise that the Russian professor speaks French. In the Russia of the 1880s, speaking French was part of a good education for the upper classes, hence a Russian professor would speak it. But this is also a wink at adventure story cliches in general, where foreign characters almost always speak the hero's language.") The latter film also shows much obvious influence from Hergé's Tintin stories

During the 1960s, various countries whose domestic films had almost never ventured abroad gradually took their top stars to exotic foreign locales. For their audiences, unable to afford prohibitively expensive trips to other continents, there was a vicarious pleasure watching their top stars do the travelling on their behalf. The Japanese, for instance, made movies like Young Guy in Rio and Mexican Free-for All (both 1968), pictures which both resemble That Man from Rio quite a bit. More than the James Bond films, these French films also seem to reflect the international popularity of big-scale comedies like It's a Mad Mad Mad Mad World (1963) and Those Magnificent Men in Their Flying Machines. The de Broca films boast similarly spectacular stunts, on land, sea, and in the air.

But few movies ever used their exotic locales as beautifully as That Man from Rio and Up to His Ears do. In the former, Rio de Janeiro looks like heaven, even the poor sections of town, which are infused with bright primary colors and Brazilian music and dance. When the action movies to Brasília, the mix of incredible modernist architecture and vast, still-undeveloped lots are like something out of a $200 million science fiction epic.

Up to His Ears is equally impressive for its use of Hong Kong, Malaysian, Indian, and Nepalese locales, including many historic sites in the latter apparently completely destroyed in the recent devastating earthquake. Just how de Broca's crews were able to film both movies (and their accompanying disruptive destruction and chase scenes) with locale cooperation (and on-camera indifference much of the time) is yet another wonder.

Each film gets its own Blu-ray disc, and both are presented in their original 1.66:1 widescreen format. They simply look fabulous, with excellent color, a pleasing level of film grain, and with the exception of dissolves and other process shots are extraordinarily sharp and richly detailed. Other sites are reporting the audio as LPCM 2.0 mono but I'd swear at least some of Georges Delerue's sprightly music was directed to the surround channels, though if so this is conservatively done. The subtitles are good though at times one almost wants to turn them off so as not to detract from the constantly beautiful images.

Each film is fairly packed with supplements. Each includes their original and 2014 re-release trailers. The former includes an exhaustive, one-hour plus making-of documentary, "The Catalan Affair," and a shorter featurette about the collaborations of de Broca and Delerue. The latter includes "That Man from Hong Kong," an excellent half-hour documentary about the making of the film; and "From Cartouche to Cavaleur," a shorter interview with actor Jean Rochefort.

Utterly delightful and looking absolutely stunning on Blu-ray, That Man from Rio and Up to His Ears are great, great fun, an obvious DVD Talk Collector Series title.