Acorn Media // Unrated // March 31, 2015
List Price: $59.99 [Buy now and save at Amazon]
Review by Stuart Galbraith IV | posted April 7, 2015 | E-mail the Author
Case Histories (2011-?) is a good private eye series based on novels and characters created by Kate Atkinson. Set in Edinburgh, the series stars Jason Isaacs (Harry Potter) as an ex-soldier/ex-cop turned private investigator struggling with family problems and haunted by memories of the death of a young woman in which his elder brother was involved.

The BBC1 (through BBC Scotland) program began as a six-episode series of two-part hour-long shows airing during the summer of 2011, all adaptations of Atkinson novels. Two years later Case Histories returned to the airwaves, but this time as three stand-alone 90-minute TV movies, of which only the first adapted an Atkinson novel. Acorn's DVD set is billed as the "Complete Collection," though it's not entirely clear whether the program is definitively kaput or not. (The IMDb, for instance, still lists the series as ongoing.) The second series garnered modest ratings but received mostly very positive reviews. 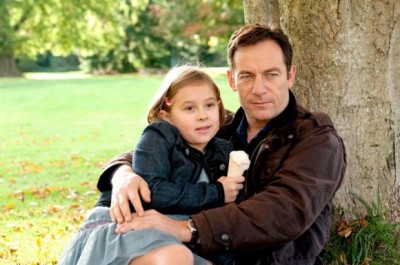 The structure of Case Histories is fairly complex, with private eye Jackson Brodie (Isaacs) investigating several different cases at once. At the same time, flashbacks spread out over a number of episodes slowly reveal an incident from Brodie's childhood clouding his mind constantly as an adult: a young woman's lifeless body is pulled from a canal, where his older brother tries to calm the young boy, eventually sending him away, apparently so that the older Brodie can attempt suicide.

Further, Brodie is separated from his wife, Josie (Kirsty Mitchell), who wants to relocate herself and their elementary school-age daughter, Marlee (Millie Innes) halfway around the world to New Zealand. Brodie's business isn't doing so well, annoying his assistant, Deborah (Zawe Ashton), while his relationship with former colleagues on the police force, particularly Detective Inspector (DI) Louise Munroe (Amanda Abbington), a single mother who clearly longs for a romantic relationship with Brodie, is especially strained.

Atkinson's 2004 novel of Case Histories, the basis for the two-part series opener, received rave reviews, including one from Stephen King, who called it "the best mystery of the decade." In that first story, typical of the show's structure generally, the narrative weaves five or six different, seemingly unrelated stories that have a strong tendency to connect by the end. In the first two-parter, for instance, Brodie investigates the decades-ago disappearance of a three-year-old girl, a case reignited when the missing girl's stuffed animal is found in the desk drawer of her recently deceased father.

The case falls into Brodie's lap while he's working a trivial problem brought by that family's next-door neighbor, an eccentric old woman (Sylvia Sims) who hires Brodie to locate her missing cats. At the same time, Brodie is looking into the seemingly random but violent murder of a wealthy solicitor's daughter.

Case Histories' plots sometimes strain credibility, such as when, in the second story, DI Munroe's teenaged son and Brodie both witness a violent, narratively pivotal assault in a parking garage, each apparently unaware of the other's presence. Stories also have Brodie becoming romantically involved with one his clients, a stereotypically pretentious, high-maintenance, and flighty actress, Julia (Natasha Little). That relationship on Case Histories isn't as credible as other aspects of the show, but for the most part the teleplays are clever and intelligent.

Brodie himself also makes an interesting protagonist. He's rugged and tenacious but also tenderhearted and almost a pushover. His relationship with adorable daughter Marlee is touching, even heartbreaking at times, and child actress Innes (Single Father and Millie Inbetween) is unusually talented, one of the best child actors of recent memory and possibly a huge star in the making.

Though it falls short of outstanding, Case Histories is a very good program deserving a longer run. Why it's less known that it should be may simply be a case of too many similar British-produced programs all competing for viewers. It's quite good, however.

Supplements include quarter-hour behind-the-scenes featurettes for each series, plus a half-hour's worth of cast interviews for series two.