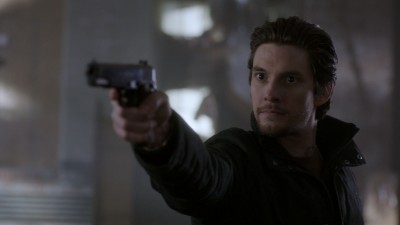 I'm a big NFL fan and always enjoy when a football player makes the transition to Hollywood actor. Although, by "actor" I mean big guy who stands around looking awkward, and by "transition" I mean does one movie. When I heard that Tully Banta-Cain (a former NFL linebacker for the 49ers and the Patriots) was going to be in a movie, I got excited. Not because I imagined I would watch an amazing second career unfold or even that the film itself would be spectacular; after all, how good can your movie be if you're casting ex-football players? But rather because I assumed that the entire project would be laughably bad. That can be a fun way to spend 100 minutes, but you know, getting to see a surprisingly good mafia movie that you had very little positive expectations about is even better. 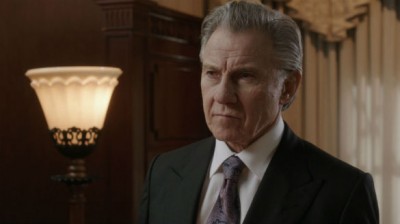 When you work for the mob you live by the gun. This is something that Nick Tortano hasn't accepted yet, but he'll have to soon. Nick wants to be a part of the family, a made man, a protected member of a prestigious Sicilian group that is connected, bonded, and unbreakable. But more importantly, he wants the perks that go with the job; no 9-5, loads of cash, general freedom, strip club visits, and power, always power. And so he works for local Family man Sal. The jobs are easy but Nick's pretty broke, and he wants to get in on the big action. But that means living by the gun, using violence to cement your status and earn the trust of the gang, something that Nick might not be made for.

A few key events lead to a new life for Nick, one that seems like a dream come true at first. He & a friend pull off a hit, showing that they're ready to be taken seriously. Also, Nick has a run-in with another mob boss, a sleaze named Tony who is too connected to mess with. This puts Nick in hot water and forces him to apologize to the daughter of the crook, a girl that he just might accidentally fall for. Twisted now in events that are way too complicated for a young thug, Nick tries to keep his head above water, tries to take control of the situation before it sweeps him away into a dangerous world that he never really wanted to be a part of. But getting out is harder than getting in, and blood doesn't wash off well. 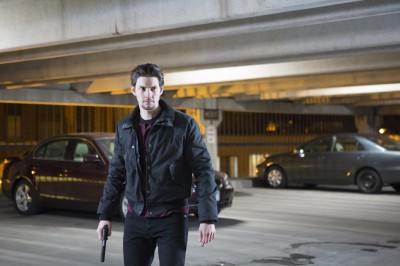 It's always nice to be surprised; it adds to the enjoyment of the film, even when the surprise isn't pleasant. Go into a movie expecting one thing, get something so much worse, and at least you've got something to write about. But By the Gun went the opposite way, surprising me with a quality that I just didn't expect. It was a good mob movie, if not a great one, a film that didn't glorify crime but rather gave it a little realism. Again, not on par with a film like Mystic River perhaps, but still a strong, Boston crime drama that really doesn't make brutality seem very appealing. For the first 50 minutes the story is strong, the characters are believable, and events unfold in an exciting fashion. You pull for Nick, you meet all his messed up buddies, and you begin to hope that he & his new girl can just get out of all this in one piece.

It's the last half of the movie that keeps it from excellence though. Director James Mottern is only debuting his second film, and his inability to keep the story going at a high level shows. Ben Barnes, who you might recognize as Prince Caspian from the Narnia movies, is likeable and handsome, but quickly becomes a bit of a one-note character. Of the many side actors, the girlfriend (Leighton Meester) might be the strongest, though the guy who played her father was pretty funny in an insane kind of way, and Harvey Keitel was passable as basically the same role he always plays. Not that his part mattered whatsoever, but Tully Banta-Cain was awful as a goon who was called on to do nothing more than stand there and look tough. All in all, a good crime movie that starts better than it finishes but won't have you raving.

Video: With an aspect ratio of 16x9 Widescreen, the video quality of the Blu-ray disc isn't as high as you'd expect. The film just doesn't use the high resolution of the images to its full extend, failing to add light & color to showcase the clarity of what could have been powerful scenes. It's a gritty crime drama, I know, cold & sad & dark. But the picture quality was left behind the story when it could have been brought more to the foreground.

Audio: The film was done in Dolby Digital, with an option between English Dolby TrueHD and English Stereo 2.0. There are also subtitles available: English SDH and Spanish. The audio quality of the film is quite good, with a strong emphasis put on conversational language. There isn't a ton of impressive music or effects, but the sound there is was done well, with solid balance and clarity.

Extras: There are a few extras on the disc. The film can be watched with Audio Commentary, an option for which is found in the special features menu. Also, there are eight deleted scenes, short bonus footage segments that total 10 minutes. And there are five trailers: By the Gun, Stonehurst Asylum, Elsa & Fred, Automata, and The Humbling. 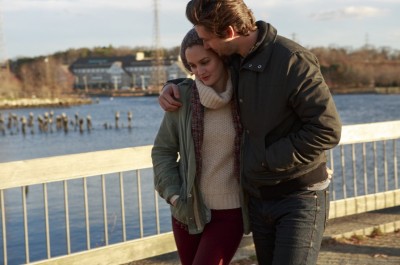 Rent It. If you're looking for Goodfellas, you're setting yourself up for disappointment. By the Gun is no amazing crime underworld drama, but it is a solid piece of cinema that everyone involved can at least be proud of. The story has a nice hook and a pretty good main character. Other than that, there isn't much special going on, but as long as you don't set your standards too high you might actually be pleasantly surprised. The video is average at best, the audio is nice, and there are a few extras, though nothing to write home about. Overall, a mediocre movie that could have been a lot worst.