I think that when you have such a tentpole event as Game of Thrones did with their Red Wedding in Season Three, the challenge of figuring out where to go from there could be considered a little bit daunting. But as we see in Season Four, the easiest part of it may be that those who are within the vast universe created by George R.R. Martin are also attempting to figure out what is next for them as well.

It is hard to figure out where to start with this without trying to give the shop away, but for the sake of effort and such. Jaime Lannister (Nikolaj Coster-Waldau, Oblivion) has returned to his family's fold, under his father Tywin (Charles Dance, Gosford Park) and sister/occasional lover Cersei (Lena Headey, Terminator: Sarah Connor Chronicles), despite missing his right hand. He does not appear to be as arrogant as he once was, even striking up a friendship with his bastard brother Tyrion (Peter Dinklage, Season Three). Then you have the family the Lannisters shattered seasons ago, with Arya Stark (Maisie Williams) still trying to find another family member to find safety with, under the escort of Sandor Clegane (Rory McCann, Clash of the Titans). Sansa (Sophie Turner) escapes King's Landing and a punishment by the dastardly Joffrey (Jack Gleeson) to find safety in another land, or so she thinks. And you have another bastard, this one of Stark origin in Jon Snow (Kit Harington), trying to warn those who he stands guard with at The Wall of a pending attack where they will be massively outnumbered, an attack that as it turns out, is one of several memorable moments in Season Four. 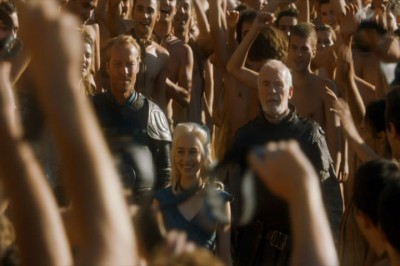 There are other characters and storylines in the Westeros universe, and by all means I do not want to discuss them all or lest sacrifice a spoiler or two. Many get a crystallizing scene or two that they get to knock out of the park and the knack that Game of Thrones has that other shows do not is that the viewer could perhaps tend to suffer from a bit of fatigue compared to others, where one would say ‘Oh, not THIS (character or storyline) again!' But with this show, balance is struck well, so that (purely for tossing out there) scenes which go to Daenerys (Emilia Clarke, Clash of the Titans) and her apprenticeship of ruling a land, the events that enter into her universe are worth paying attention to in some manner.

One of the people who rightly deserves praise for his work in the season and on the show as a whole is Dinklage. The beginning of the show finds him distant from the family and presumably better for it, as he was more of a drinker and carouser. But the more that he was involved, the more he became a ‘legitimate' Bannister, we see a person who deals with resentment from one side of the family and indifference from almost all of the rest, and when there are events which are set in motion against him, you can very much see the hurt from it. Going from acceptance and comfortable to this new circumstance gives Tyrion new depth and resonance for many, and Dinklage delivers on this with shining colors in Season Four.

The show has the blood and gore that a show set during the medieval period would expect to have. There are also some new wrinkles sprinkled into some of these battles, particularly the one at the Wall. Lots of lives are lost, be it computer generated ones, or real-life ones of various import. In Season Four, we get a bunch of them, but another asset when it comes to Game of Thrones is that while the deaths are an initial shock and, depending on your investment, a pleasure, by the end of the season, you have the feeling that they were done out of necessity, because many of the other characters we see at the end of the season are in a transitional state, or have just gone through it. The cast churn was done because it needed to, not because Martin or those involved with the show felt like it. 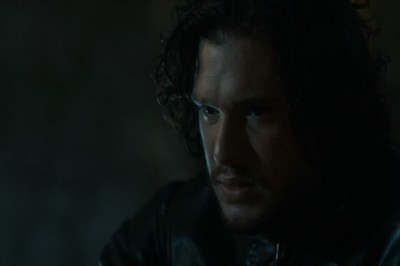 While Game of Thrones did not leave many with their jaws on the floor similar to Season Three, not only in Season Four did they manage to surprise those unfamiliar with Martin's books and did so early (starting in the season's second episode), but they managed to balance what the show was known for with some understated and effective character advancement. The show's knack for doing so is the reason why I keep coming back and why I enjoyed Season Four as much as I did.


HBO rolls out Game of Thrones with a 10-episode run, with two episodes on each disc, and all appear in 1.78:1 anamorphic widescreen. For the sake of disclosure, I actually watched the last two episodes in high definition via Apple TV and in looking at them against the standard definition discs there is not a lot of qualm when watching them. Colors are reproduced nicely, and the Iceland and Ireland exteriors look vivid. The high-definition ones convey a little more image detail in there for obvious reason, but in a vacuum the standard definition ones are quality.


Each episode comes with a 5.1 Dolby surround track that is top notch. Dialogue is well-balanced, but among the episodes where arrows fly through the soundstage clearly, and pretty much anything in Episode 9 during the battle at the Wall could be considered reference quality for standard definition discs. Low-end fidelity is present during some of these sequences as well and the experience over ten episodes is powerful and immersive yet balanced and dynamic in the quieter moments. I really enjoyed listening to it.


There are extras on the first and last episodes of the set, but there are episode commentaries for nine of ten episodes, with two commentaries on each of the last two episodes, for eleven total. The commentaries are a mix of the production team (like director Alex Graves or David Benioff), or the cast like Dinklage and Headey, even Martin himself gets in on the action. The tracks vary from dry to grating at times, with a track where Turner and Williams talk about emojis that they are using that day. Of the technical bunch, Graves may have the most consistent production recall, talking about his thoughts on the episode or scene he was responsible for. The very last track (with Dinklage, Headey and Coster-Waldau) is the most disappointing. I was expecting jokey, but said jokes were few and far between, because they were watching the episode they were on, much like most of the other dramatic contingent of the show. There are some tracks that are good but of the eleven, I would say maybe six are worth listening to. 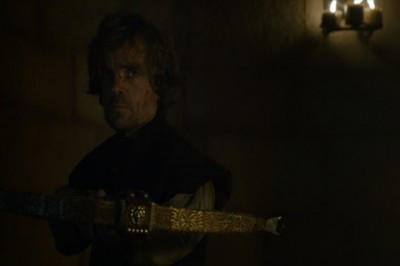 In terms of non-commentary extras, Disc One has "The Politics of Power" (25:01), which serves as bringing the viewer up to speed on the show and specifically on Season Three, and what the cast believe the season and show is about in Season Four. It is a nice mix of looking back and ahead. "Bastards of Westeros" (7:16) examines the parentless and disowned, and Martin talks about the stigma of being one in the houses and regions of Westeros, and discussing their relationship and impact in the show. It is an interesting piece. "New Characters and Locations" (7:39) is pretty much just that, on how the crew are handling it, and the aesthetic and vibe on the production of it. Disc Five has "Behind the Battle for the Wall" (37:09) which examines how things unfolded in the penultimate episode of the season. They attempt to illustrate how to do the practical shooting with what was done via CG. The building of sets and big moments in the episode are recounted, along with various relevant swordplay sequences. All in all, a solid piece. "The Fallen" (29:35) is a roundtable with those who perished during the season, their thoughts on the show at first and how they learned they were going to get killed, along with how their wrap scene was handled. It is a tad long but fun regardless. A blooper reel is brief (2:02) but has a yuck or two, and two deleted scenes (3:05) are decent yet forgettable.


Game of Thrones delivers on big-time action moments, as well as scenes of dialogue that are impressive, whether you have an emotional investment in the characters delivering them or not. Oh, and they keep things moving forward with development and/or exposition. They juggle so many balls in the air with ease it is impressive and it shows off here. Technically the discs are excellent, and the extras are almost up to the task. If you have bought the previous seasons there will be little qualm with adding this to the collection.