Timeless // Unrated // May 12, 2015
List Price: $49.97 [Buy now and save at Amazon]
Review by Stuart Galbraith IV | posted May 11, 2015 | E-mail the Author
Science Fiction Theatre (1955-57) is largely forgotten today. The later, much superior Twilight Zone (1959-64) and The Outer Limits (1962-64) quickly eclipsed it. Compared to those series, Science Fiction Theatre seems awfully conservative and tame in its storytelling. But on its own terms it can be a very enjoyable show. Basically, Science Fiction Theatre had an entirely different approach compared to those later shows, telling stories that tried to incorporate honest-to-goodness science into its fiction. Though pegged as sci-fi, Twilight Zone and, most of the time, Outer Limits were really fantasy series. Filmed science fiction in the strictest sense is very rarely attempted, probably out of a fear that general audiences wouldn't be able to follow or even be interested in drama pivoting around genuinely scientific concepts. George Pal's Destination Moon (1950), with its adherence to what was known or least theoretically possible in terms of space travel at the time, qualifies, despite some painful attempts to integrate standard dramatic situations into its narrative. Robert Wise's excellent The Andromeda Strain (1971), about the scramble to investigate a deadly, possibly extraterrestrial organism, is perhaps the best example of science fiction cinema at its most "pure."

Science Fiction Theatre has much the same mindset, though its imagination tends to be as limited as its obviously tight budget. Though sincere, it probably disappointed its original audience just as it has continued to disappoint many in the 60 years since its debut. But, understanding its intentions, the series has many good points.

Timeless's Science Fiction Theatre: The Complete Series marks the first time all 78 episodes have been made available on DVD. Licensed from MGM, the set sources ancient video masters probably dating back at least to the 1980s, maybe much earlier. But the shows are at least watchable. 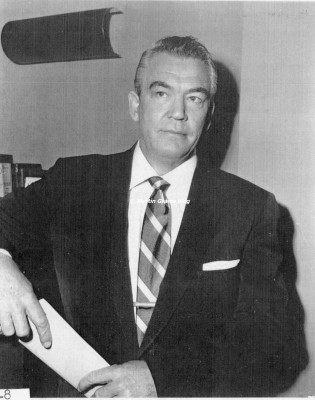 Each episode begins with on-camera narration by Truman Bradley, an occasional actor though primarily a radio announcer. Usually he's seen fiddling with some electronic gizmo, and his opening and closing remarks touch upon some bona fide field of science or research.

Where One Step Beyond's John Newland, that show's "guide into the world of the unknown" was a good dramatic actor, eerily setting the tone for the stories he'd introduce, and where Rod Serling, with his endless chain-smoking and obvious discomfort and on-camera tics made his intros memorable, Bradley comes off as genial if a little condescending. The writers overdo the conservative approach by having him assure viewers: "The story you are about to see is fiction," he says, adding almost apologetically, "It didn't happen." Well, then, what's the point of watching?

Ivan Tors got into the sci-fi game with The Magnetic Monster (1953), a low-budget but unusually intelligent little gem about the search for a missing valise full of an artificial radioactive isotope, a voracious consumer of energy. It was the first of three feature films about the OSI, the Office of Scientific Investigation. It was followed by the less impressive but still enjoyable Riders to the Stars and Gog (both 1954). Science Fiction Theatre is an extension of Tors's interest in real science and high-tech gadgetry and concepts.

"Out of Nowhere," the third episode, is typical of the show's offbeat approach. Bats begin crashing into a skyscraper, leading investigators from the Continental Air Defense Command to suspect a sophisticated radar-jamming device, except that its signal seems to be emanating from outer space. Eventually one of the investigators realizes the that signal is bouncing off the ionosphere (or something) and, using simple geometry, they determine the source of the signal is actually coming from a building in another part of the same city. Dramatically, it's nothing much, but it is logical and reasonably believable.

In the premiere episode, "Beyond," a test pilot (William Lundigan) is certain he saw a UFO while traveling three times the speed of sound. An intense investigation follows, with the pilot's credibility hanging in the balance. Later on, it's discovered that what he actually saw was his own ball-point pen, suspended in mid-air due to brief zero-gravity.

Solutions like these might disappoint those hoping for Outer Limits-type monsters from outer space, or wild Twilight Zone-type twist endings, but they are logical.

Sometimes Science Fiction Theatre actually stretches a bit. One fondly remembered show, "Time Is Just a Place," adapts Jack Finney's short story Such Interesting Neighbors, with Don DeFore and Marie Windsor playing a typical suburban couple puzzled by their new next-door neighbors (Warren Stevens and Peggy O'Connor). They seem unfamiliar with everyday household devices yet own fantastic inventions years ahead of their time. Though filmed on an obviously tight schedule with simple sets (along the lines of other syndicated series like Adventures of Superman) it's pretty effective, even memorable.

A similar episode, "Stranger in the Desert," pits uranium prospectors Marshall Thompson and Gene Evans against another apparent old prospector (Lowell Gilmore) claiming to be merely gathering specimens of plant life in the area. Of course, he turns out to be an extraterrestrial explorer, but his chats with Thompson's character are interesting, with the old man putting the younger Thompson's greed into perspective.

The series began shooting in color, apparently in the belief that the dissemination of color television would occur much more quickly than it actually did. By the program's second and last season, Science Fiction Theatre had switched to black-and-white.

Timeless's Science Fiction Theatre: The Complete Series is watchable, just. The video transfers provided by MGM for this filmed-in-35mm show look positively ancient, with dark scenes in some episodes almost impossible to make out, and with reds in the color episodes suffering especially. These transfers are at least 25 years old, quite possibly 40 years old or more. The 78 half-hour shows are crammed onto eight single-sided discs, but they actually fare a bit better than MGM's DVD-18s for their earlier Outer Limits releases, with up to 10 episodes per disc. The mono audio, English only with no subtitle options, is okay, and the discs are Region 1 encoded. No Extra Features.