Acorn Media // Unrated // June 2, 2015
List Price: $39.99 [Buy now and save at Amazon]
Review by Scott Pewenofkit | posted July 3, 2015 | E-mail the Author
The Movie
Peter Flannery and Martin Brandt's muddled historical drama New Worlds, a TV miniseries from England, is making its DVD review in the U.S. on the heels of star Jamie Dornan's Fifty Shades of Grey popularity. New Worlds can also exploit the popularity of HBO's Game of Thrones because of the show's attempts at epic cinematic filmmaking and its bloody violence, which New Worlds supersedes in place of the history lesson it purports to give its audience. But take away the action sequences, of which there aren't nearly enough, and viewers are left with a visually lush, detailed pseudo-historical epic that lapses into long moments of dullness. 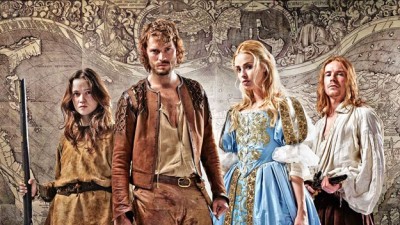 New Worlds is billed as a kind of sequel to 2008's The Devil's Whore, which dealt with the English Civil War. New Worlds opens two decades later in 1680, during the rule of King Charles II. Charles II (Jeremy Northam) seeks revenge against those who conspired to murder his father years earlier. Perpetrators are sought in Europe as well as Massachusetts, which the show portrays in a historically simplistic way as a safe haven for freedom-seeking English people who only want to live and worship as they please. The series tries to underline historical events by showing an uncomplicated, linear evolution of progress, while allowing its characters to espouse platitudes of freedom and the right of self-governance, which is always at the heart of the justification for colonial expansion. Its platitudes are nothing new to American audiences, and so New Worlds gives them nothing new to think about.

New Worlds emphasize not only the idealistic ambition of its four leading characters and their banal love story as two couples on two different continents who are at the center of events surrounding the reign of Charles II, the settling of the American colonies, and a battle between Catholics and Protestants. In England, Beth Fanshawe (Freya Mavor) is the better half of one of one of the two couples. Her romance with unintentionally creepy wood-dweller Abe Goffe (Jamie Dornan) slows down the overstuffed series to a crawl by the second episode by giving their boring relationship time to develop. The other couple featured in the series meet in the Colonies just as the female half, Hope (Alice Englert), casually kills a Native American man and then scalps him. She explains to her English love interest Ned (Joe Dempsie) immediately after killing him that she had to scalp the Indian to make it look as though he was killed by "one of his own". Since the majority of Americans know little about 17th century British history, the packaging for the US release focuses on the romance between the two couples. The timing of the release to the U.S. is also suspiciously close to the promotion of Dornan's leading role in Fifty Shades of Grey, which was released theatrically in the U.S. at the same time as Acorn's New Worlds DVD. Selling the banal love story between Fanshawe, Goffe, Hope, and Ned proves that the series' creators are more interested in cashing in on the recent Fifty Shades phenomenon than they are in presenting an honest depiction of the history of their country. 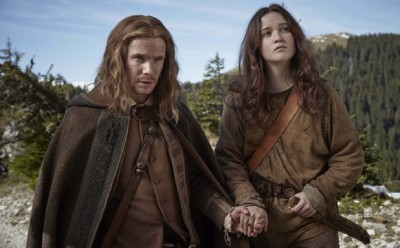 New Worlds is history, skewed, by the winning side. When we see an action movie-style battle between a group of faceless, unidentified Native Americans and British colonists, their conflict is presented in the savagery vs. civilization dichotomy that is familiar to nearly all audiences of Westerns and other movies that negatively depict Native Americans. In this way, New Worlds lacks originality. They play liberal lip service to the plight of Indians, but they have nothing new to contribute to the stoic Red Man stereotype they've perpetuated in their series. The defeat of the Indians implies that civilization has fended off the savagery of the unexplored New World.

The simplistic portrayal of indigenous people isn't without its perfunctory self-congratulatory lament about their treatment by European settlers. Ned laments his family's wealth by questioning what right his father's company has to cultivate land previously occupied by indigenous people. But this sort of facile sentiment is a substitution for writing Indian characters that are three-dimensional. The series takes a ludicrous turn when one of the British characters marries an Indian man, a stoic stock Indian from the Western genre. The series has to ability to show the complexities of the historical period it is trying to portray. All is lost to ineffective romance and cliched archetypes. 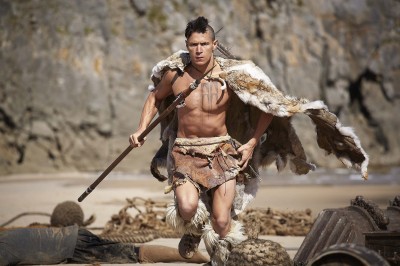 New Worlds' plotting is clunky because of the creators' inability to weave multiple story lines over different continents. Adding to the show's confusions is the lack of explanation for many of the events that happen on screen. In place of clarity and cultural and historical context, the viewer is given chaotic, yet unimaginative action sequences that try shamelessly to cash in on The Game of Thrones fad (some of the minor actors have appeared on Thrones). The script's use of love stories involving four different characters on two different continents needlessly tangles a story that would have had more focus if it had better dramatized its historical events.

New Worlds hovers between stodgy historical drama and disposable swashbuckling epic. The four main characters of the series are meant to be portrayed as important players in world affairs, on the cusp of historical events that will change everything. But the series, and the timing of its release in America, shows a motivation to capitalize off of the notoriety of Fifty Shades of Grey and the success of Game of Thrones. The series has the former's vapid romance and the latter's propensity for bloody violence, but with allusions to historical accuracy. The cinematography and action sequences are large-scale, even for an "event" show like New Worlds. The scale of the 2.35:1 aspect ratio sized images gives the series a sweep and scale that it hasn't fully earned, and is too large for a TV series.

There is also a photo gallery of behind the scenes photos and several minutes' worth of deleted scenes. At four hours, it's almost hard to believe that anything was left on the cutting room floor. Nothing about the special features adds to the experience of the series, nor do they give any wider context for those who may not be up to date on their 1600s British history.

Final Thoughts:
Placing so much emphasis on the two loves stories in New Worlds slows down the series' pacing. Told from a European perspective, the film skews British history the same way countless Westerns and other, American-made historical epics depict European settlement of North America as a civilizing saving grace. However, the sound and image quality of the 2 DVD set are nice to experience because of the care and detail that went into their creation. The length of the miniseries and the hyped-up nature of New Worlds as a large scale epic, historical drama were not conveyed well, save for its cinematography and production design.