Invitation to a Gunfighter

Kino // Unrated // May 26, 2015
List Price: $29.95 [Buy now and save at Amazon]
Review by Stuart Galbraith IV | posted May 19, 2015 | E-mail the Author
In the spreadsheet where I keep track of the movies I own and watch, I discovered that I had seen Invitation to a Gunfighter (1964) in December 2008 and had personally rated it one-and-a-half stars (out of four, aka the Maltin System). But I remembered absolutely nothing about it, and decided to give it another chance via Kino Lorber's new Blu-ray.

It turned out to be even worse than I had forgotten. The film is a strong contender for the title of Dullest Hollywood Western ever. It's the kind of movie I had to "rewind" three times after falling asleep during its last 45 minutes. Indeed, the film acted like a narcotic; even noisy gun blasts and the roar of MGM's lion at the end failed to rouse me from my slumber. Finally, I managed to get through all of Invitation to a Gunfighter, looking much like star Yul Brynner does on the Blu-ray's dyspeptic cover art. 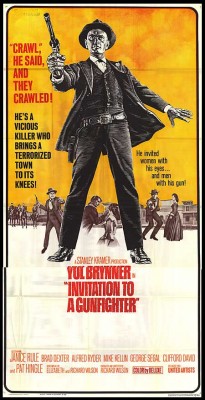 Invitation to a Gunfighter adapts a same-named 1957 episode of Playhouse 90 written by Leslie Stevens and directed by Arthur Penn. Apparently in the TV version, Hugh O'Brian starred as a gunfighter causing trouble in a small town, which then hires another gunfighter (Gilbert Roland) to drive him off, only to regret their decision when the second one proves an even greater menace.

The pretentious and dull-as-dishwater movie version was readapted, this time by longtime Orson Welles associate Richard Wilson and his actress wife, Elizabeth. Additionally, some of the movie plays like it was retailored some more for Yul Brynner's persona. The resulting film was heavily promoted in trailers as coming from Stanley Kramer Productions, but the movie itself lists only "Kramer Productions," with Kramer's name nowhere listed as executive or associate producer. Maybe he didn't care for it, either.

In the movie, Confederate veteran Matt Weaver (George Segal) returns home to New Mexico Territory after the war. He was the lone Reb in a town full of Union men and families that lost loved ones during the conflict, yet he seems shocked to learn that his farm was confiscated and sold by banker Sam Brewster (Pat Hingle) who owns most of the town. He also lives in the same iconic house prominently used in Alfred Hitchcock's Psycho (1960), surely recognized by many in the audience. Matt's one-time fiancée, Ruth (Janice Rule), has unhappily married another man, Crane (Clifford David), who lost an arm fighting for the North and, it's clumsily implied, is impotent.

The small town makes a huge fuss over Matt's presence for no clear reason, with Brewster eventually hiring mulatto gunfighter Jules Gaspard d'Estaing, from New Orleans. The movie awkwardly works Brynner into the opening credits, unconvincingly having him emerge from a fast-moving stagecoach to ride shotgun. This may have been added at Brynner's insistence but hurts the film because of its obvious stunt double, and for one other bizarre reason. The stagecoach carrying Jules passes Matt, who's exhausted and on foot, many miles from town, yet Matt somehow arrives there first, a good twelve hours before the stagecoach does.

The bald gunfighter is humorless and, perhaps sadistically, maybe out of boredom, endlessly manipulates and humiliates the townsfolk, especially cocky, big shot Brewster. In one typically ludicrous scene, Jules is gambling in a saloon where a fellow gambler on a high-stakes bet produces four aces. Jules calmly counters that he's got the better hand: five kings. With everyone so terrified of the gunfighter, no objection is raised to this outrageous cheat.

Invitation to a Gunfighter is a total misfire, talky and lifeless, populated by colorless, badly defined, or hammy performances. Brynner's stoic Creole is interesting at first, but he's neither as humorously sardonic as his character from The Magnificent Seven nor the steely-eyed (literally), relentless gunslinger stalking Richard Benjamin so memorably in Westworld. He's just a stock character with a lot of superficial flourishes.

Segal is surprisingly good as Matt, despite his New York-Jewish roots seeping into his Southern-accented Reb. Pat Hingle, at the time highly regarded for his TV work, is simply hammy.

The overcooked plot has no less than three characters vying for Ruth's affections, but Janice Rule, better at socialite roles, is miscast and unmemorable as a sturdy and traditional but beautiful frontier woman.

Invitation to a Gunfighter sinks under the weight of its pretentions, vaguely or overwritten dialogues by scribes seemingly unaware that B-Westerns have been covering similar territory and characters for decades, usually in under an hour's running time and with twice the entertainment value.

Shot for 1.66:1 widescreen Invitation to a Gunfighter looks okay, not great, on Blu-ray, with decent sharpness and color but nothing to write home about. The mono audio, English only with optional English subtitles, is decent enough. The disc is Region A encoded.

The lone extra is a trailer, quite a good one for such a dull film, and narrated by the ubiquitous William Woodson (The Invaders, etc.).