Entertainment One // Unrated // May 5, 2015
List Price: $39.98 [Buy now and save at Amazon]
Review by Stuart Galbraith IV | posted May 28, 2015 | E-mail the Author
Note: This review includes spoilers pertaining to Broadchurch's first season, though virtually none for its second. Readers that haven't yet seen the program's first season will want to skip this review…

They pulled it off. Viewers held captive by the hypnotic qualities of Broadchurch's first season (2013) probably, like this reviewer, were alternately delighted and alarmed by news that the program had been renewed for a second series of episodes. Give how its first season ended, a credible continuation seemed almost impossible, yet creator Chris Chibnall, the man behind the BBC's wildly successful revival of Doctor Who, found the means, and despite the added distraction of supervising Broadchurch's ill-conceived American remake, Gracepoint (2014), also starring Tennant but not Colman, in between.

A very intelligent British crime drama with an unusual format, Broadchurch's eight-episode first series/season focused on the investigation of a single crime, the murder of a young boy, and how that crime and its investigation, along with intense, exploitative media scrutiny, impacted the small seaside community in which it is set. Much of the focus was on the lead detectives, played by David Tennant and Olivia Colman, but it was as much a Robert Altman/Alan Rudolph-type tapestry with similarities to the excellent, decidedly dark Wallander, and with a dash of shameless but effective 24-type cliffhanger suspense tossed in. 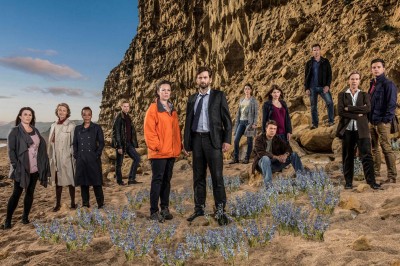 Set in South West England along the Dorset coast, Broadchurch's season one climaxed with the slightly gimmicky but undeniably shocking and credible revelation that the 11-year-old boy, Danny Latimer, from a seemingly normal middle-class family, had been murdered by predatory adult Joe Miller (Matthew Gravelle), the stay-at-home husband of one of the two detectives investigating the case, DS (Detective Sergeant) Ellie Miller (Olivia Colman).

Rather than attempt to dramatize another murder in Broadchurch, unlikely given its stated low violent crime rate, and diminish the devastating impact of Joe's unsavory pedophilic past on Miller and their son, season two wisely opts to rejoin the Broadchurch community months later as Joe's criminal trial begins. There's no doubt about Joe's guilt, but nonetheless he shocks all by defiantly pleading "not guilty." This serves only to unnecessarily agonize the already shell-shocked Miller and the Latimer family even further.

Meanwhile and more predictably, misanthropic lead detective Alec Hardy (Tennant), distracted by a life-threatening heart condition, is secretly and personally protecting a witness, Claire Ripley (Eve Myles) from Hardy's earlier, botched Sandbrook child murder case. He's stashed her in a secluded home in Broadchurch to protect her from her former husband, Lee Ashworth (James D'Arcy), whom Hardy is certain murdered the two girls. Near the beginning of the season, it's revealed Ashworth has returned to Britain and is looking for Claire. Concerned for Claire's safety, Hardy enlists Miller's aide, she having been demoted to uniformed work as a traffic cop.

Where season one of Broadchurch had with pinpoint precision criticized the destructive impact of intense, ravenous media scrutiny, season two is all about the similar, scorched-earth impact criminal trials have on victims. Joe's legal team, junior barrister Abby Thompson (Phoebe Waller-Bridge) and her senior, Sharon Bishop (Marianne Jean-Baptiste), counter a mountain of evidence against Joe (including his confession) by employing a take-no-prisoners defense. They accuse Hardy and Miller of incompetence and conspiracy, while heinously suggesting Danny's own father, Mark (Andrew Buchan) is the killer, this despite no evidence to support their outrageous theory.

The Latimers, for their part, implore local resident and retired Queen's Counsel Jocelyn Knight (Charlotte Rampling, an excellent casting choice) to prosecute. Knight is realistic about the defense's chances, but also is a true believer that the Scales of Justice will balance out in the end, a sharp contrast to the cynical, win-at-any-cost ambitions of her opponents in court, women who know their client is certainly guilty.

Season two, then, is less about the rights of the accused vs. their victims than it explores and deplores the senseless additional suffering inflicted upon direct and indirect victims of violent offenders gaming the system. Joe never takes the stand himself, but many of Broadchurch's characters do, and most are ruthlessly scrutinized with a blame-the-victim lack of moral decency.

As I mentioned in my review of Broadchurch: Season One, I hadn't been much of a fan of David Tennant; I thought he made a terrible, self-consciously quirky title character on Doctor Who. But here his fine skills as an actor and willingness to play such an unpleasant, mostly unsympathetic troubled character, one similar to but even moodier than Kenneth Branagh's magnificent Wallander, impresses.

Olivia Colman is even better; clearly she's destined for Emma Thompson-strata greatness. My only complaint is that the scripts overwork her uncanny ability to break into sobbing fits at the drop of a hat, rather like the overuse of Stan Laurel's tears in Laurel & Hardy's two-reelers.

The rest of the cast is uniformly terrific also, with Rampling offered a particularly interesting role, though everyone is no less than very good. To wit: A comparatively minor character, Knight's junior barrister (William Andrews), has one great little scene near the end of the series, one of the highlights of the entire season.

As before, Broadchurch was filmed in 1.78:1 high-definition and looks great on DVD. The eight episodes, totaling 390 minutes of running time, are accompanied by a fine 2.0 Dolby Digital Stereo soundtrack, with optional English SDH. Oddly though, the disc menus all feature the same (supporting) character and none of the principals, surely a mistake.

Supplements include a behind-the-scenes featurette. Needless to say, all should be avoided until after viewing the entire series.

It seemed insurmountable, but the creators of Broadchurch have fashioned a second series as good or better than its first. But how can they possibly pull off a series three? Highly Recommended.