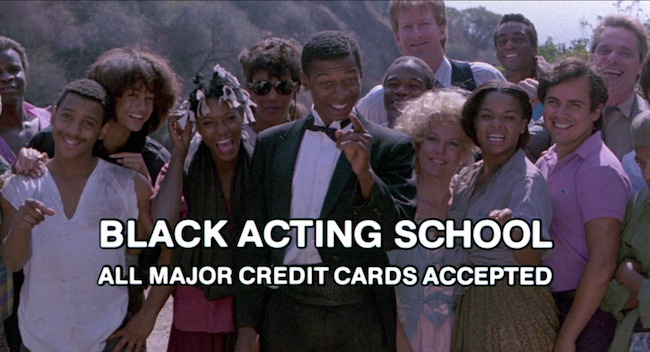 Robert Townsend's Hollywood Shuffle is the stuff of indie movie legend. Shot in dribs and drabs over three years, using money that Townsend pooled from acting jobs and maxed-out credit cards (although the distribution company, Samuel Goldwyn, also provided a significant chunk of finishing money when they bought the movie), this low-budget comedy came out in 1987 and instantly made Townsend's name as an actor, writer, producer, and director. When you watch the finished product, the guerrilla nature of the production is obvious in some ways (the movie's vignette-based structure), but is far less obvious in others (attractive cinematography by Evil Dead 2's Peter Deming, an ensemble cast of comics who are actually funny).

The subject of Hollywood Shuffle is clearly near and dear to Townsend's heart: the plight of the young black actor in Hollywood. In a nutshell: there isn't enough work to go around, and when something is offered, the role is that of a pimp, thug, or some other racist stereotype. Townsend's character, Robert Taylor, is a nice, middle-class dude first glimpsed in his family's bathroom, prepping for his audition for a presumably trashy movie called Jivetime Jimmy's Revenge. He minces and struts as he performs his Jivetime Jimmy monologue, then breaks character to ask his little brother Stevie (Craigus R. Johnson) for the next line. Stevie flatly reads, "I ain't be got no weapon." Robert then puts back on the modern minstrel persona and repeats the line into the mirror, just as his grandmother (Helen Martin) opens the door and gives him a disapproving look.

That scene is basically the entire film in miniature. Robert must struggle first to perform the character well, so he can make acting his lifelong career, so he doesn't get trapped in his lousy day job at a hot dog stand. The catch is that then he has to struggle with whether a career of playing these demeaning roles is going to be any better for him than that hot dog stand. Robert daydreams about becoming famous and winning awards, but how can you do award-worthy work when you're stuck playing ebonics-spouting, crotch-grabbing, fake-Afro-wearing cartoon thugs?

Undeniably, that's a heavy topic, but Townsend and co-writer Keenen Ivory Wayans (In Living Color) thankfully favor silliness over speeches to get their point across. There are plenty of clever details in the film's many audition scenes -- a light-skinned actor who admits to tanning, a trained Shakespearean performer over-articulating the script's "jive" dialogue, a room full of men all desperately attempting to look and sound like Eddie Murphy -- but the movie's most memorable moments come during the many tangential comedy sketches peppered throughout the film. A fake commercial features a British-accented Townsend pitching an acting school where white instructors teach black students how to act blacker. Later, Townsend and Jimmy Woodard host a fake TV show, the streetwise answer to Siskel and Ebert, in which they criticize an art film because its title is impossible to say then praise the many layers of a horror movie about pimps and hos. Perhaps most satisfyingly, the movie parody Death of a Breakdancer mocks the trappings of the hard-boiled detective genre, throws in some chopsocky, and climaxes with a scene where the jheri-curled bad guy, played by Wayans, is threatened with a bottle of activator spray.

The ensemble cast is filled out with some faces that might have already been familiar to audiences at the time, like Paul Mooney, Franklyn Ajaye, Anne-Marie Johnson, and Helen Martin, in addition to many more comics still on their way up, including Kim and Damon Wayans, perpetual ornery old man John Witherspoon, Fear of a Black Hat's Rusty Cundieff, and stand-up Dom Irrera (whose appearance as an effeminate writer with the name "Mandrill Man Vacuum" shows that both Hollywood and semi-progressive indies still have a long way to go when it comes to gay stereotypes).

Both Robert Townsend and Keenen Ivory Wayans have receded from the spotlight in recent years, which makes Hollywood Shuffle even more poignant. This drift suggests that, as hard as it is to break into the movie business on your own terms, it is probably even harder to stay in it.

Hollywood Shuffle itself is still incredibly funny and appealing nearly thirty years later, helped immensely by Townsend's charming lead performance(s). The film also unfortunately feels as timely as ever, especially when two of the highest profile recent movies with black leading actors -- and made by black directors!! -- were about a slave and a butler. Of course, Denzel is doing the action thing these days, so this film's fantasy sequence involving "Rambro," the mainstream black action hero, has sort of come true too. I guess that's progress, right? 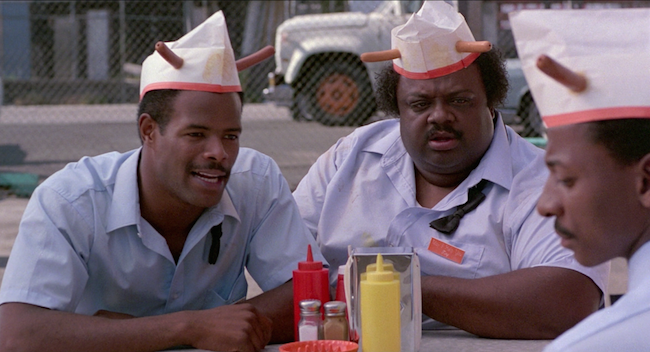 The Video:
Hollywood Shuffle features 35mm photography that arguably rivals the production value of contemporaneous bigger-budgeted Hollywood product. This AVC-encoded 1080p 1.85:1 transfer maintains that faux-high-budget sheen, with no noticeable film damage or fading, excellent clarity, and no compression issues. The Death of a Breakdancer section looks like it was blown up from grainy black-and-white 16mm stock, but the look serves this sketch perfectly.

The Audio:
The DTS-HD MA 2.0 audio has also held up well. No noticeable damage or defect. The dialogue is always clear and audible, and the music has a satisfying, rounded sound. No subtitles.

Final Thoughts:
What a fun movie. Townsend and his ensemble cast make this mixture of narrative and sketch comedy an irresistible -- and thoughtful -- treat. It's a bummer no one has ever fashioned a proper making-of featurette for this film, because what went into making the film off-screen is as integral to the legacy of Hollywood Shuffle as what made it on screen. Even so, the movie comes Highly Recommended. 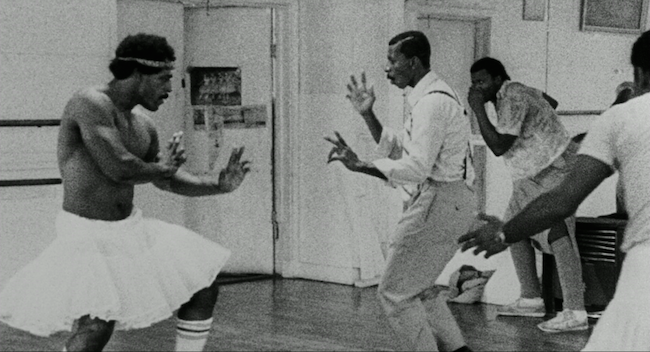