Shout Factory // Unrated // March 10, 2015
List Price: $29.93 [Buy now and save at Amazon]
Review by Stuart Galbraith IV | posted March 31, 2015 | E-mail the Author
Pee-wee's Playhouse (1986-1990), the uniquely sophisticated Saturday morning show that appealed to adults as much as children, debuted on DVD back in 2004. If you have those discs, throw ‘em away. Shout! Factory's remastered episodes are profoundly better: the old discs are like watching the series through a goldfish bowl long overdue for a cleaning, while Shout!'s new release is so clean and vibrant it's almost like experiencing a brand-new show.

Pee-wee's Playhouse came on the heels of Pee-wee's Big Adventure (1985), the sleeper hit directed by 26-year-old wunderkind Tim Burton. Man-child (or child-man?) Pee-wee, the creation of Paul Reubens, moved to Saturday mornings, and Herman/Reubens became an instant pop culture icon whose career, after quite unfairly crashing and burning for the most absurd of reasons, has been enjoying a most welcome renaissance.

If you have a Blu-ray player, I'd recommend getting the series in that format. I snapped up Pee-wee's Playhouse: Seasons 3, 4 & 5 when it appeared suddenly in our screener pool, and I'm glad I did. Even in standard-definition, it's obvious that these remastered episodes visually are a huge upgrade over those earlier DVDs, plus the set includes some really great extra features. 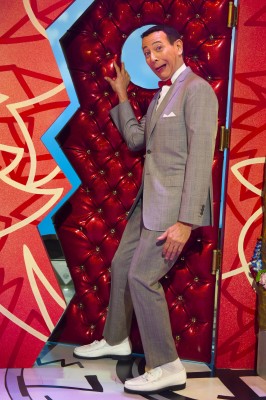 Playhouse expands on the toy-filled, contraption-heavy fantasy home of Pee-wee's Big Adventure. Each show opens with Pee-wee firing up a fully-charged Conky the Robot (Kevin Carlson) to get the day's "secret word." Throughout the program, when anyone says the secret word, the cast of characters -- and the audience -- is instructed to "scream real loud!" And many did, to the consternation of parents, recalling Bullwinkle Moose's infamous instructions to the kids at home to pull the tuner knob of their TV sets off so their parents couldn't switch to another channel.

During the course of each episode, Pee-wee is visited by various recurring characters, including "the most beautiful woman in Puppetland," busty Miss Yvonne (Lynne Marie Stewart), ever-cheery Cowboy Curtis (Laurence Fishburne; yes, the), mail lady Reba (S. Epatha Merkerson), lifeguard Tito (Roland Rodriguez), and others. Pee-wee's playhouse is also home to a wide range of fantasy characters, mostly puppets and marionettes, including Pterri (voiced by John Paragon), a skittish Pterodactyl, and Jambi, a genie (also Paragon) who grants daily wishes. There's also a regal talking cow, the Cowntess; a magic screen; and Chairy, a friendly, comfortable talking chair. ("Sit on me!" she often says.)

The show is at once old-fashioned and progressive. The Pee-wee character is patterned after early television innovator Pinky Lee who, as one observer on the IMDB points out, is eerily similar, "right down to the little slanted window on the set, the ill-fitting checked suit, the laugh, the hat, the behavior [and] even the eyebrows." Beyond Lee, there are direct and indirect references, from Howdy Doody (Randy, Pee-wee's marionetted nemesis) to Betty Boop (the show's title tune, sung by Cyndi Lauper, using the pseudonym "Ellen Shaw"). The set is dominated by antique furniture, knickknacks and toys, many of them probably belonging to Reubens, an inveterate flea market junkie. Indeed, the show has a wonderful timelessness about it, from Miss Yvonne's early-'60s bouffant hair and wardrobe to the puppet beatnik jazz trio: Chicky Baby, Cool Cat, and Dirty Dog.

Conversely, the program is admirably all-inclusive, rather like the unassuming Our Gang comedies made at Hal Roach studios in the '20s and '30s. Everyone's invited, regardless of race or creed. There's a black cowboy (the pre-Matrix star here is like a cross between The Mickey Mouse Club's Jimmy Dodd and an early '80s Rick James), a Hispanic lifeguard, Asian kids come to visit. Beyond that, the playhouse is open to geeks, fat kids, the unattractive and lonely -- everyone. (Sharp-eyed viewers will note Suzanne Kent's recurring role as Mrs. Rene; Kent first earned nation-wide attention as an overweight blind date on a famous episode of Taxi.)

One of the best things about Pee-wee's Playhouse is the way it reintroduced retro pop culture to younger generations. Each show, for instance, features abridged vintage cartoons. Unlike the one-reelers produced by Disney and Warner Bros., the cartoons shown on Pee-wee's Playhouse are mostly forgotten except by animation buffs, from such long-defunct studios as Van Beuren and Ub Iwerks, as well as even more obscure material from Europe and Central America. Some of these excerpts are tantalizingly bizarre. One features the now-politically incorrect Bosko dancing with a roll of toilet paper. Animation shot specifically for the show, including stop-motion dinosaurs, claymation food in the refrigerator, and "Penny" segments, compares quite favorably to the classic cartoons.

Many of the animated segments are introduced by the King of Cartoons, a role played through most of the series' run by Blacula star William Marshall. (This reviewer once met the naturally imposing Marshall and, with a minimum of coaxing, got him to deliver his character's signature line, "Let the car-to-o-o-o-n...begin!" It was a big thrill.)

Though parents might worry that their children would adopt Pee-wee's squirrelly, spastic energy, the show in fact has just the right balance of entertainment and education. The late Bob Keeshan, Captain Kangaroo, was an advocate for responsible children's programming, and was pretty vocal in his dislike for almost everything on TV. But he loved Pee-wee's Playhouse, and with good reason. Secret words and Pee-wee's wacky mannerisms aside, the show subtly teaches good manners (there are more "please" and "thank yous" on this than most adult shows), telephone etiquette, sharing, and other basic social skills. It also incorporates little bits of science, geography, astronomy, social sciences, and other soft-sell lessons without ever calling attention to their purpose.

Parents probably blanched when, in the series' first episode, a regular segment called "snack time" has Pee-wee instructing viewers on the finer points of making Ice Cream Soup. But later snack times slyly emphasize healthy eating -- one segment actually features water as that week's snack ("Mmm, watery!" exclaims Pee-wee). In its later seasons, Playhouse only got better, further refining its look while embracing the technological capabilities of the medium for ideas not possible when Playhouse began as a theatrical piece born out of The Groundlings.

Pee-wee's Playhouse: Seasons 3, 4 & 5 appears to have originated on 35mm but finished in post-production on analogue videotape. Apparently, as was done with Star Trek: The Next Generation, the remastering involved going back to the original film elements, which are in pristine condition, and painstakingly remastering everything from scratch, an expensive process. The results are fantastic, with even the program's many video-generated effects looking great. In short, the series looks far better than it did even during its original network run, as well as its initial home video releases.

Though encompassing the show's final three seasons, television networks basically cheated kiddies when it came to producing new "seasons" of established Saturday morning television shows. They'd simply add a tiny number of new episodes and fold those in with earlier shows, assuming kids and adult viewers wouldn't notice how frequently the older episodes were being repeated. And repeated. (We noticed.) Season 3 consists of just two new episodes plus the prime-time network Pee-wee's Christmas Special (included here), while seasons 4 and 5 consist of ten episodes apiece. (Season 1 had 13 episodes, Season 2 had 10.)

From about the middle of Playhouse's second season, episodes were in full stereo and they sound great here with optional closed-captioning. The discs are region 1 encoded.

Supplements include two audio commentary tracks on Pee-wee's Christmas Special, one featuring Reubens, Stewart, Paragon, and animation producer Prudence Fenton, the second with other members of the cast and crew. They are both highly informative and interesting. Even better are a series of featurettes running more than an hour featuring nearly all of the cast and key production personnel. Reubens, perhaps deliberately not wanting to break from his screen persona, is conspicuously absent, but that's okay. The myriad interview subjects paint a vivid portrait of the show's star as a remarkable and extremely generous talent, and that working on the show was both a blast and personally and creatively rewarding. These featurettes also include some fascinating behind-the-scenes footage, none more remarkable than watching its star utterly transform from Paul Reubens into Pee-wee Herman moments before each take.

Pee-wee's Playhouse is highly recommended for both parents and their kids (my seven-year-old, new to the series, instantly fell in love with it). Those of us who saw it when it was new recognized it as an instant classic. And now it looks better than ever.