Kino // PG // June 23, 2015
List Price: $29.95 [Buy now and save at Amazon]
Review by Stuart Galbraith IV | posted July 13, 2015 | E-mail the Author
There's not a whole lot to be said of Bank Shot (1974), a caper comedy starring George C. Scott and directed by Gower Champion, the Broadway dancer, choreographer, and Broadway stage director - an odd choice for this sort of material. The story is built around a single, mildly clever idea, and tries too hard with its eccentric but feeble characterizations. The film was based on the novel The Bank Shot by Donald E. Westlake, a prolific novelist and screenwriter working in multiple genres. He's best remembered for his novel The Hunter, the basis for the movie Point Blank, and for his screenplay adaptation of Jim Thompson's The Grifters. The Bank Shot was Westlake's second "Dortmunder" novel, the first of which was adapted as The Hot Rock (1972), starring Robert Redford as the same if barely recognizable character Scott plays here, though for the movie of Bank Shot he's been renamed Walter Upjohn Ballantine. In other respects, however, Scott's character is a bit closer to Westlake's original.

Kino's new Blu-ray, licensed from MGM, looks okay, a bit better than MGM's transfer of the otherwise greatly superior Harry in Your Pocket (1973), one of three vaguely related releases, the third being Cops and Robbers (1974). 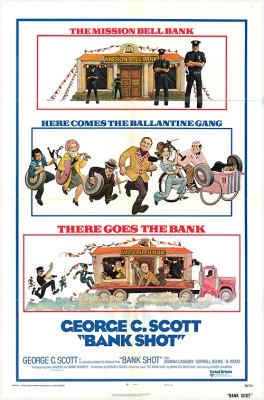 Bank Shot has a free-spirited, lighthearted air that's hard to entirely dislike, and this tone is aided somewhat by composer John Morris's like-minded, bouncy score. (Morris, of course, was the favorite composer of Mel Brooks.)

Comedy is an elusive animal, and for this reviewer at least, Bank Shot never generates much in the way of laughs or ingenuity. The characters are, to my mind, too emphatically bizarre, the plot too thin and lacking in ingenuity. Scott's, for instance, is given distractingly bushy, singularly unreal eyebrows the size of caterpillars, and the actor for no clear reason speaks with a pronounced lisp. The other characters all are dressed and behave oddly to no avail. Karp, for instance, constantly wears phony false mustaches and hairpieces. Why? I've not idea.

The movie is lacking in innovation. There are any number of ways to tell this story, holding back information from the audience, for instance, and saving a few surprises for later. Movies like The Asphalt Jungle (1950) and Rififi (1955) set the standard for such films, but Bank Job never generates much suspense, comical or otherwise, and the "let's steal the whole building" aspect is revealed very early in the story. The characters do little more than attach a trailer and wheels and haul it away, without much thought given to how they might cover their tracks.

There are wasted opportunities throughout. Streiger and Constable set up a command center in a room being painted, but that leads only to a single visual gag that isn't particularly funny. Character actor Liam Dunn plays the painter. For a brief period, roughly 1972 to 1976 (the year he died), directors suddenly discovered his great talent as a comedian. He turned up in movies like Blazing Saddles and Young Frankenstein but had his best role as the judge in What's Up, Doc?, giving a hysterically funny performance. In Bank Shot he has no lines and is barely even glimpsed, a real waste of his talent.

The movie actually received a lot of positive, forgiving reviews, but Scott thought it "a dreadful film," one he did purely for the money and because of his admiration for director Champion.

Filmed in 2.35:1 Panavision, Bank Shot looks okay, not great, with decent but unspectacular color, clarity, and contrast. Likewise, the DTS-HD Master Audio 2.0 mono is also just okay. No subtitles or alternate audio options, and the disc is Region A encoded.

The lone extra is a trailer, in terrible shape but a clever one, featuring sexy co-star Joanna Cassidy directly addressing the audience. A trailer for Cops and Robbers is tossed in as well.

Worth seeing once for its cast and, for nostalgic Angelinos, maybe for its use of various San Fernando Valley locations (including the Sepulveda Drive-In), but otherwise it's pretty deadly. Rent It.