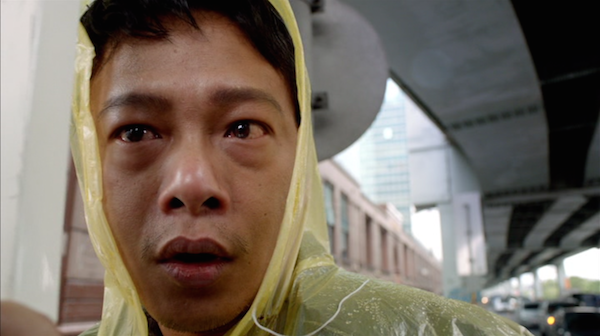 Tsai Ming-Liang is a master filmmaker whose work is like no one else. His reliance on long takes with minimal dialogue makes his films the kind of "arty" stuff that immediately scares off folks whose diet consists entirely of conventional movies. But they can be tough going for fans of art cinema too (my DVD Talk colleague Randy Miller III notes in his Blu-ray review for Tsai's new movie Stray Dogs that it took him three sittings to make it through the film).

Enjoyment of Tsai's films depends somewhat on taste, but also on instinct. For example, I think his melancholy romantic film What Time Is It There? and its sexually charged, surprisingly disturbing sequel The Wayward Cloud are both contemplatively paced masterpieces. Meanwhile, Tsai's award-winning film Goodbye, Dragon Inn felt to me like deadly dull self-parody. And it's hard for me to exactly pinpoint concretely what is so powerful about the first two films I named that is lacking in the similarly styled third one. Some intangible essence, I guess.

Considering how consistent Tsai's style is, it's tempting to call 2013's Stray Dogs more of the same. Once again, Tsai's lead is Lee Kang-Sheng, the laconic De Niro/Mifune to his minimalist Scorsese/Kurosawa. Once again, the story is relayed elliptically and impressionistically, with most scenes occurring in one low-key static shot (sometimes two, if Tsai decides to switch from a close-up to a wide shot). Once again, Tsai consistently provokes more questions from his viewers than he provides straight answers.

Taken purely on face value, Stray Dogs concerns a working homeless man (Lee Kang-Sheng) and his two small children (Lee Yi-Cheng and Lee Yi-Chieh) as they lead their daily lives. The man spends hours holding an advertising sign at a busy intersection, getting battered by wind and rain, standing stock still and not actually communicating with anyone, not even the guy holding another sign right next to him. Lee Kang-Sheng has one of the great faces in cinema, consistently deadpan and opaque enough that audience members can stare at his seeming affectlessness and project all sorts of thoughts and emotions onto him, but also expressive enough that we can see the subtle struggle to keep a roiling torrent of emotions repressed and hidden from the eyes of outsiders. Tsai gives this character two big moments in the film where he can no longer keep up the blank facade and breaks down emotionally, but both moments are as enigmatic as Lee's stoicism. In the first, he breaks his silence at the sign-holding job and starts reciting poetry and then singing. In the second, he drunkenly attacks a cabbage that his children have decorated to look like a woman's face.

Something is clearly supposed to have happened with the mother in this family, but what exactly that was we can never be sure. There are three women seen in the film, who somehow might all be the same woman. In the beginning, we see one woman (Yang Kuei-Mei) brushing her hair and watching over the children as they sleep. In the middle of the film, there is another woman (Lu Yi-Ching) who works at the supermarket where the children wander around and spend their days. She takes on a surrogate mother role, even going so far as to wash the little girl's hair and dry it in the supermarket ladies' room. In the final passage of the film, which seems to break chronology, making it either a flashback or a delusion or some mixture of the two, a third woman (Chen Shiang-Chyi) who has characteristics of the previous two is shown living with the man and his children, completing this marginalized nuclear family, helping the kids with their homework while the man wanders around their squatted, semi-decrepit apartment in a drunken stupor.

The last twenty minutes of the film consist merely of two wordless, extremely long, static takes that show the man standing behind this woman (his wife?), isolated from her as if she was one of the anonymous guys holding a sign on a street corner with him. If you're not in sync with the movie at this point, this conclusion might try your patience. After all, there isn't a giant "a-ha" moment or punchline coming, just a lot of small deviations from the stillness that might reverberate emotionally for you or not. I was fully swept up in the movie, and I certainly felt the length of this final passage, but I was shocked when I rewound it and realized how long it actually lasted. It did not seem like twenty minutes.

Tsai has said that Stray Dogs will be his final feature film, and it acts as an appropriate summation of his delicate aesthetic and thematic concerns. Still, for the small corner of cinema fandom where a new Tsai film is a tentpole event, here's hoping the retirement doesn't stick. 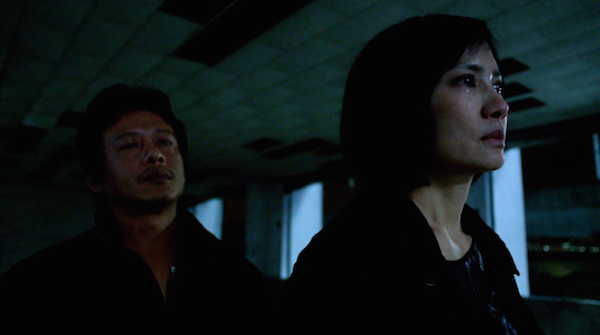 The DVD
Stray Dogs comes packaged with a booklet featuring an essay on the film by critic Jonathan Rosenbaum.

The Video:
The widescreen 1.85:1 image is a bit inconsistent but mostly quite strong. Most shots have excellent clarity and a good amount of detail for an SD presentation. However, a handful of wider shots with a lot of texture seem to challenge the compression algorithm in ways for which it was not properly prepared, leading to some noise and blockiness. Otherwise, the transfer offers strong contrast and vibrant color reproduction, especially in the brighter supermarket scenes.

The Audio:
The Mandarin Dolby 5.1 surround audio (with optional English subtitles) is typically quite low-key, as befits the story. Even in the quietest moments, though, there is plenty of immersive, layered ambience. The noisy traffic scenes and a heavy rainstorm sequence have plenty of oomph, but nothing approaching the sound design on an overblown Hollywood blockbuster.

Special Features:
Cinema Guild didn't spring for a second DVD, so the hour-plus interview featured on their Blu-ray release of this film has been excluded.

Final Thoughts:
There's a part of me that knows that a lot of people would hate this movie if they saw it. This doesn't change the fact that I really loved this film and felt hypnotized, transported, and emotionally nourished by it. It's not for everybody, but what is? Highly Recommended. 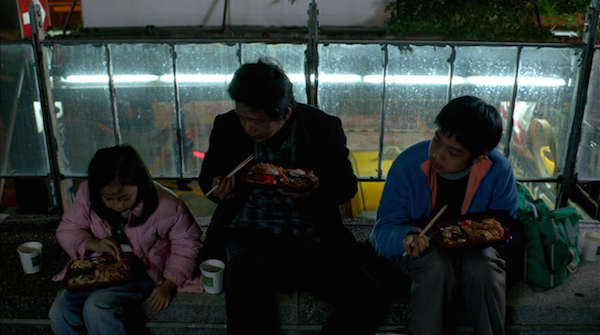