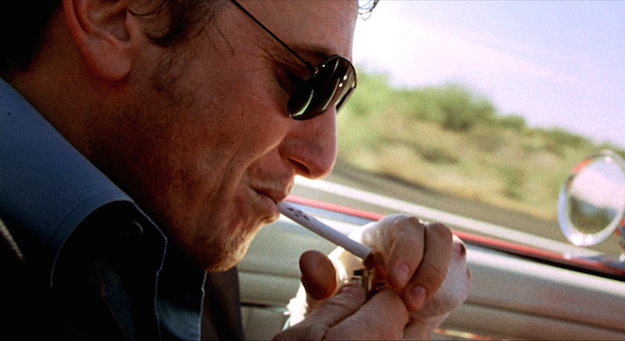 I saw Oliver Stone's U Turn in a movie theater when it came out in the fall of 1997, and then promptly forgot it. It struck me then as unnecessarily in-your-face and stylistically nutso, like Stone had arbitrarily taken the semi-psychedelic, everything-goes aesthetic of 1994's Natural Born Killers and thoughtlessly applied it to a poor, unsuspecting neo-noir story. Now, mainstream cinema has more than caught up with Stone's use of mismatched film stocks, off-kilter framing, and intuitively jagged editing, meaning that U Turn has aged surprisingly well. No longer does it seem overblown or aggressive; instead, it's just... stylish.

Recent Oscar winner John Ridley (12 Years a Slave, TV's American Crime) adapts his own hard-boiled novel Stray Dogs (reportedly with uncredited rewrites by Stone and co-producer Richard Rutowski) into an almost prototypical film noir. Sean Penn plays drifting lowlife Bobby Cooper, who gets stranded in the sun-scorched small town of Superior, Arizona, and, within a few short hours, gets entangled in the conflicting murderous plots of an unhappy married couple. Bobby is immediately bedazzled by the sweet and sexy Grace (Jennifer Lopez, still in her pre-Wedding Planner run of actual good performances in actual good movies), but he ends up with blue balls and a busted nose when her older hubby Jake (Nick Nolte) comes home and catches the two of them in a heated clench. Still, Jake sees something in Bobby, a certain amorality that inspires him to offer him the job of killing Grace for the life insurance money.

Normally, Bobby wouldn't go for that sort of thing (he thinks), but his satchel full of thirty grand, intended to pay off some rough Russian bookies who already removed two of his fingers, gets obliterated by shotgun fire during a grocery store holdup he has the misfortune to witness. He agrees to push Grace off of a cliff for a piece of the insurance, but he can't bring himself to do it. Grace presents her counter-offer: Bobby can have her and all the money in her hubby's safe, which far outstrips that measly ol' insurance dough, if he offs the old man instead.

Bobby is portrayed as a pretty terrible person, but the fact that he would rather just get his busted Mustang fixed so that he can leave town instead of killing absolutely anybody makes him almost slightly redeemable. However, the film, somewhat resembling Scorsese's After Hours remade as an acid western, keeps turning the screws on Bobby and closing off all his options except for the murderous ones. Billy Bob Thornton is at the height of his powers as the fat, grease-covered, vindictive mechanic Darrell who rips apart Bobby's car before he'll put it back together, and then charges extra for the privilege. Claire Danes plays Jenny, a teenager who gets a crush on Bobby after seeing him at the local diner, sending her boyfriend Toby N. Tucker (Joaquin Phoenix) into a constant blind rage. Toby, whose bad decisions clearly didn't end with the decision to shave the letters "TNT" into the back of his head, seems to be comic relief, but he manages to inadvertently throw a major monkey wrench into Bobby's plan to leave town with no blood on his hands nonetheless.

Stone clearly wants the town of Superior, Arizona, to feel like Purgatory for Bobby, with its out-dated signage, old-fashioned soda machines, and an ornery, blind Native American oracle, sitting in the center of town and portending tragedy to come. A heavily made-up Jon Voight plays the blind man with a perfectly modulated mix of Anaconda-style hamminess and genuinely creepy conviction, telling Bobby things he doesn't want to hear but probably should. The rest of the supporting cast finds their own level of outlandishness: Powers Boothe plays it mostly straight as the local law constantly keeping an eye on Bobby, while Julie Hagerty and Laurie Metcalf get a few funny, offbeat interactions with the steadily unraveling anti-hero.

The final act of the film becomes an inevitable pile-up of double-crosses and dead bodies. It is also unfortunately the weakest section of the film. As it played out, I couldn't help but compare it unfavorably to the conclusion of the Coen Brothers' outstanding neo-noir Blood Simple, which manages to bring everything to a bloody climax with nail-biting tension and darkly funny cleverness. Stone clearly would love his finale to play as bitterly funny, but it becomes such a literally painful, brutal, and bloody compendium of misfortunes for all characters involved that the dark chuckles never come. Of course, nihilism has its place in film noir and neo-noir, but sometimes it works better when the characters believe in something. 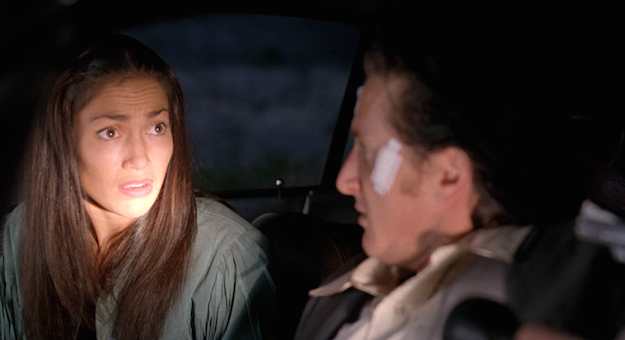 The Blu-ray
Like most Twilight Time releases, U Turn comes in a limited edition of 3000 copies. A booklet featuring an essay on the film by TT's Julie Kirgo is included.

The Video:
Wow! Robert Richardson's cinematography, largely shot on reversal film stock to give the film a grainy, other-worldly look, really pops in this AVC-encoded 1080p 1.85:1 transfer. The wild shifts between washed-out, sunbaked shots and hyper-saturated images with crazily deep blacks are all represented beautifully. The details are crisp. The film grain has certainly not been scrubbed away. There is a little bit of dirt and speckling, especially during shots with optical effects, but for the most part, this HD master is defect-free.

The Audio:
Oliver Stone's technical experimentation on this film was certainly not limited to the visuals, as this crisp and clean DTS-HD MA 5.1 surround audio mix makes apparent. While the dialogue is extremely present in the center channels, Stone puts all sorts of ghostly ambience in the surround channels, weaving it with Ennio Morricone's eclectic score and some excellent source music selections. All the gunshots and punches are cranked up way beyond the normal levels, making the violence much more uncomfortable on a gut level than in a typical thriller. As for subtitles, the disc offers English SDH.

(HD, 2:47) - There are some spoiler-y clips stuck into this piece, so if you haven't seen U Turn (or you haven't seen it in a while), it's probably best to hold off until after the film to check this out. Stone talks about the box office failure of the film, its dark tone, and its cult popularity.


Final Thoughts:
Oliver Stone's U Turn holds up so much better than I expected it to. The strong lead performances from Sean Penn and Jennifer Lopez provide an emotional center around which Stone can weave his crazy-quilt of stylistic flourishes and fun supporting turns. I found myself more exhilarated than annoyed this time around, although that brutal ending is still a severe comedown. Twilight Time has done a great job bringing this title to Blu-ray, with top-notch A/V quality and some worthwhile new bonuses. Highly Recommended. 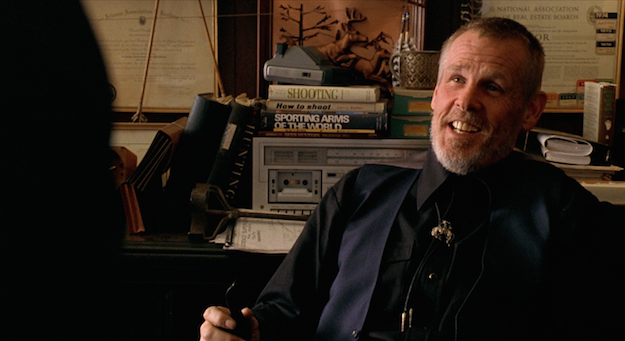