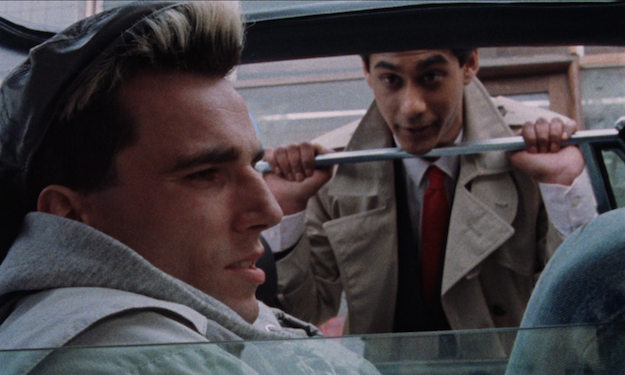 The modest 1985 drama My Beautiful Laundrette is the film that brought actor Daniel Day-Lewis (Lincoln) and director Stephen Frears (The Queen) to the attention of an international audience. It is also the film debut of writer Hanif Kureishi (Venus), whose experiences as a British-born, second generation Pakistani serve as the basis for the film's unpretentious exploration of race, sexuality, class, and family in Thatcher's Britain.

Omar (Gordon Warnecke) is young and unemployed, stuck living in a tiny flat with his father (Roshan Seth, Mississippi Masala), who was a great man in Pakistan, but who now just sits in bed, pickling his liver with vodka. Omar's uncle Nasser (Saeed Jaffrey, The Man Who Would Be King) offers his nephew a job washing cars in his parking garage, but the ambitious (and somewhat greedy) Omar wants to prove he can be successful as a businessman. Somewhat laughingly, Nasser gives Omar the chance to manage a self-service laundry he owns in the south side of London. Covered in graffiti, full of broken down machines, and haunted by the homeless and the aimless, the "laundrette" offers a no-win situation that Omar nonetheless plunges into headfirst. This is just one of many questionable decisions that Omar makes.

Needing an infusion of cash to help revitalize the business, Omar enlists his schoolfriend Johnny (Day-Lewis) to help him do a little light burglary and, sure, some drug-dealing, using product Omar ripped off from his smuggler cousin Salim (Derrick Branche).

For nearly half of its running time, the film plays coy with Johnny and Omar's relationship. Omar seems particularly fond of his old friend for reasons that aren't completely clear, while Johnny is warm but standoffish. We are finally given a clue about them when Omar and Johnny go to visit Nasser's home, so Nasser can meet this boy that is helping his nephew remodel the laundrette. Omar's cousin Tania (Rita Wolf), who has been aggressively flirting with Omar, opens the door to see Omar reaching for Johnny's face. Johnny pulls away as Omar says, "Eyelash." Tania immediately registers that her crush may be in vain. Shortly thereafter, Omar and Johnny share a passionate onscreen kiss while walking back to the laundrette.

My Beautiful Laundrette delves into "hot button" areas -- after all, an interracial gay romance is one of its major story threads -- but it doesn't address them as issues, in a movie-of-the-week sort of way. Kureishi's script has a handful of Meaningful Proclamations, in which the political problems of the time are underlined in a character's dialogue for the folks in the cheap seats (this film was originally shot to be broadcast on TV, after all), but director Frears is quite matter-of-fact in his approach to the material, positioning those more theatrical moments within a fairly naturalistic milieu.

One of the acting highlights involves Omar's father showing up to the newly remodeled laundrette, hours after he was expected, and chatting with Johnny. Johnny used to look up to Omar's father but then spent years hanging out with fascist skinheads, making trouble for immigrants like him. Omar's father tries to set aside the past and pleads with Johnny to get his son out of "this underpants-cleaning condition," to convince Omar to go to college. Daniel Day-Lewis and Roshan Seth beautifully convey the strange, tortured history between the characters and the way they both care for Omar, even if neither one of them knows the way to express it.

The fresh authorial point-of-view and the excellent cast make My Beautiful Laundrette an easy film to like, even if the overabundance of subplots (which also includes Nasser's flagrant affair with a white lady [Shirley Anne Field]) makes it all seem a tad unfocused. It's not a perfectly executed story, but it's also not the kind of story you encounter everyday. For that reason alone, My Beautiful Laundrette is definitely a film you should explore. 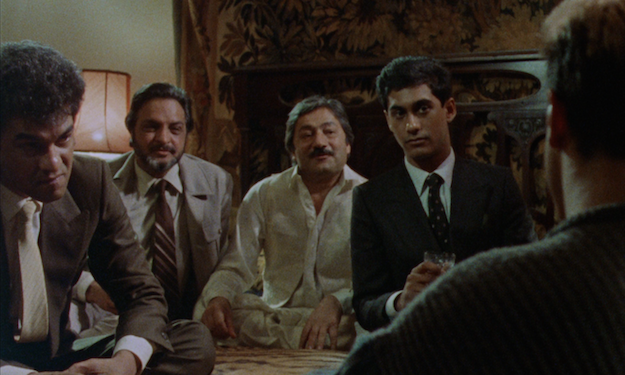 The Blu-ray
My Beautiful Lanundrette is packaged with a foldout insert featuring an essay by Graham Fuller.

The Video:
The AVC-encoded 1080p 1.66:1 transfer looks good considering the source. My Beautiful Laundrette was shot on 16mm, with no intention of being shown in cinemas. It's grainy. It's often pretty soft. It's clearly a modest TV production. Even so, the transfer brings out a surprising amount of detail from the material and nicely reporduces cinematographer Oliver Stapleton often wild and clashing use of color. It's not as jaw-dropping as the 16mm transfers from last year's Les Blank box from Criterion, but it's a strong HD version of this less-than-pristine material.

The Audio:
The LPCM mono audio is not wildly dynamic, but it offers a nice clean mix in which the dialogue is also clear and understandable, punctuated by the synth-y sounds of Ludus Tonalis (aka composers Stanley Myers and Hans Zimmer). English subtitles are available.

(HD, 33:05) - Stephen Frears proves to be quite funny, prickly, and candid in this interview with film scholar and producer Colin MacCabe. The topics which he touches upon include his career in theater and TV prior to making the film, his impressions of Hanif Kureishi, his relative ignorance of immigrant life and the world he was unwittingly stepping into, the impact of the release of the film, and plenty more.

Final Thoughts:
My Beautiful Laundrette became a landmark film, both for its complicated portrayal of Pakistani culture within England and for its casually dramatized gay love story. Even though it is a landmark, it includes stretches that ramble and other stretches that play a bit stilted. Still, the performances, especially from a young Daniel Day-Lewis, make it an engrossing watch. The bonus interviews that Criterion has included are quite in-depth and tremendously interesting. If you are already a fan of the film, this Blu-ray upgrade is a must-own. If you are unfamiliar with it, Criterion's strong presentation still comes Recommended. 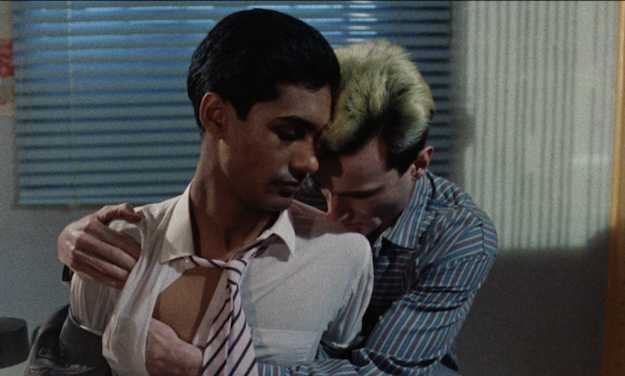