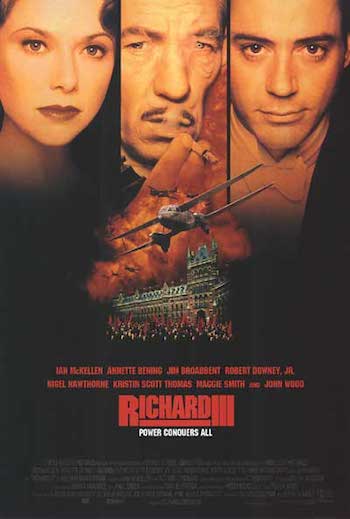 Star Ian McKellen and director Richard Loncraine's 1995 version of Richard III is an outstanding Shakespeare adaptation that sticks to the words on the page while seamlessly updating the setting of the play from the 15th Century War of the Roses to the 1930s and the rise of fascism in England. This choice is pointed, but not heavy-handed or boringly literal in its analogy. In fact, this is one of the most primarily entertaining Shakespeare films to date, with Loncraine focusing heavily on how to tell his story visually while he and McKellen (sharing screenplay credit) shave one of Shakespeare's longest plays down to a brisk but totally satisfying 100 minutes.

Richard III, of course, is one of English literature's greatest anti-heroes, a crippled hunchback whose physical deformities were no match for his misshapen psyche. Scholars will argue about the historical accuracy of this portrayal of Richard -- maybe he wasn't a hunchback, maybe he wasn't a bloodthirsty tyrant -- but there's little argument that Shakespeare created an endlessly fascinating character -- and a juicy part to play. McKellen's Richard is a wickedly self-aware, unrepentantly murderous schemer, whose hunger to be king is ravenous and whose morbid sense of humor consistently comes to the fore. As in Oliver Parker's contemporaneous Othello, where Kenneth Branagh's Iago treated the audience like a confidante, McKellen delivers certain soliloquies and asides directly to camera. Rather than fully spill his guts to us, however, McKellen's Richard is essentially a monstrous Bugs Bunny, asking viewers, "Ain't I a stinker?" with conspiratorial glee.

The supporting cast is stacked with heavy hitters, who all ably bring immediacy and energy to their roles. Kristin Scott Thomas nicely intimates the insecurity that would lead a strong woman like Lady Anne to marry Richard, who already killed both her father-in-law, King Henry VI, and her husband, Prince Edward. Nigel Hawthorne is tremendously affecting as the Duke of Clarence, Richard's brother who wrongly believes in his brother's love, even as Richard's henchmen are about to do him in. Maggie Smith is typically grand as Richard's mother, who despises him as she would a disease. Jim Broadbent is suitably slimy as Richard's conspirator, the Duke of Buckingham.

Only the American members of the cast seem slightly out of step. Neither Annette Bening nor Robert Downey, Jr., embarrass themselves as Queen Elizabeth and her brother Lord Rivers, but the Shakespearean dialogue can't help but feel labored and ill-fitting. Still, their exquisite unspoken reactions to Richard's awfulness more than justify their appearances in the film.

The look created by production designer Tony Burrough, costumer Shuna Harwood, and cinematographer Peter Biziou is suitably opulent but still nicely restrained. Even once Richard starts dressing like a black-clad, jackbooted instrument of malevolent totalitarianism, and elements of Nazi imagery overtake the decor, the filmmakers feel confident enough to let the stylistic shift occur without drawing focus to comment about the change.

McKellen, Loncraine, and their collaborators have clearly put a lot of serious consideration into the text and how to most vividly bring it to life for a new audience. Surprisingly, the filmmakers adapt Shakespeare as though they were adapting a best-selling novel, with the main idea not being to protect a sacrosanct old text but to make the best movie of the material. I don't mean to suggest that this version is dumbed down or mindless, but you surely don't need to be a Shakespeare scholar to appreciate why this film is razor-sharp, darkly funny, and undeniably exciting.

The Blu-ray
Richard III has been released in a limited edition of 3000 copies. The disc is accompanied by a full-color booklet, featuring an essay by Twilight Time's Julie Kirgo.

The Video:
The AVC-encoded 1080 2.35:1 transfer presented here is awfully good. The image is consistently clean, with a satisfying film-grain texture. Colors are bold without looking over-saturated or bleed-y. There's just a touch of digital noise here and there, but it's pretty negligible.

The Audio:
The DTS-HD MA 5.1 surround audio is defect-free and well-mixed. Scenes of warfare have a satisfying full-range attack, while the music is also well-served by the surround speakers. The dialogue is clean and clear and always intelligible. The disc offers one subtitle option: English SDH.

- The score by Trevor Jones is offered in a nice DTS-HD MA 2.0 mix.

Final Thoughts:
It can be a tricky proposition to modernize Shakespeare while sticking to the original written words. This version of Richard III not only avoids feeling stilted, it is positively invigorating. This new Blu-ray offers a strong-looking and great-sounding remaster. Highly Recommended.