There's no real reason for these two Mickey Rourke movies to be paired up in a double feature. Apart from Rourke's appearance in both, there's little in common between The Pope of Greenwich Village, which is a naturalistic streetwise drama from 1984, and Desperate Hours, which is an operatic 1990 remake of an old Bogart movie. Though Shout! Factory has specialized in double features for the horror flicks put out by their Scream Factory imprint, only one of these movies is a genre film -- and only kinda. So, pardon my cynicism, but I suspect that these two were paired up because there are more fans of the earlier film than the latter, and if you want The Pope of Greenwich Village that badly, maybe you'll deal with Desperate Hours coming along for the ride. 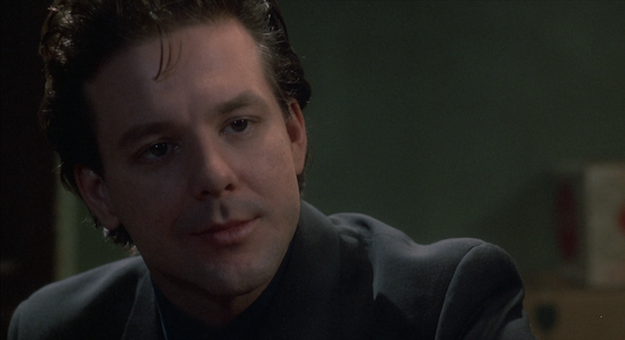 I knew of this film by reputation only before popping in the new Blu-ray, so I was hoping for a real offbeat gem. Unfortunately, The Pope of Greenwich Village doesn't live up to its (admittedly modest) hype. While a part of me is tempted to wax nostalgic for the days when a major studio would pay to make a low-key character-based drama like this film, the actual finished product has an overall blandness that makes it hard to champion.

Rourke, however, is right in his early-'80s ultra-watchable sweet spot, where he could effortlessly and convincingly project both toughness and vulnerability. He plays Charlie, a neighborhood guy in New York's Greenwich Village who dreams of owning a restaurant but can't hang onto a dollar. It all goes to bookies, loan sharks (to pay off the bookies), and his ex for child support. It doesn't help matters that his cousin and partner-in-crime Paulie (Eric Roberts) gets him fired from a pretty good restaurant gig at the start of the movie. Charlie's live-in girlfriend Diane (Daryl Hannah), who is mostly shown in the film lecturing Charlie and/or changing in and out of skimpy outfits, adds to the burden by announcing that she's pregnant. Paulie sympathizes and offers to cut Charlie in on a break-in on a safe that will help pay off both of their debts and then some.

Apparently Charlie has never seen Mean Streets, or at least he has seen it and somehow doesn't get that he's Harvey Keitel in this situation and that Paulie is loose-cannon Robert De Niro. Even though he and Paulie are not professional thieves, Charlie agrees to the job, along with an old Irish safecracker named Barney (the great Kenneth McMillan). It turns out, of course, there's a hitch. The money they steal is actually mob pay-off money for the cops, so these three schmucks end up with both the mob and the cops breathing down their necks.

The plot of The Pope of Greenwich Village is made for the movies. It could be a brilliant 90-minute thriller. Unfortunately, screenwriter Vincent Patrick (adapting his own novel) and director Stuart Rosenberg (Cool Hand Luke) are convinced they have a real interesting and thoughtful drama on their hands, and they let their film meander to a full two hours. There's certainly an unusual chemistry between Rourke and Roberts, and their relationship creates plenty of ingratiating moments, but the aimlessness of so many of their scenes makes the whole enterprise feel like an overblown acting exercise.

There's no shortage of excellent performances in this film, including appearances by M. Emmett Walsh, Burt Young, Jack Kehoe, and Oscar nominee Geraldine Page. It's hard not to wish that they were all working on a tighter, sharper story though. 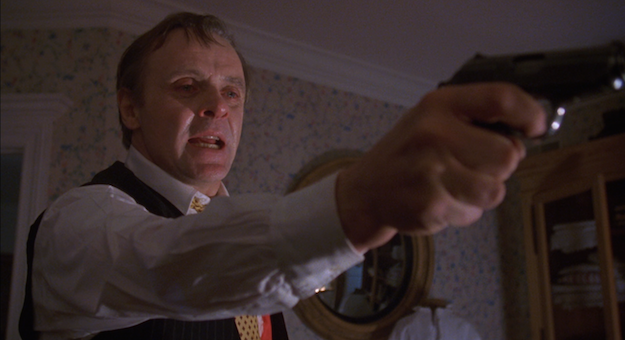 Michael Cimino's Desperate Hours is another should-be brilliant thriller that lost its way somewhere. And Mickey Rourke meanwhile is no longer in his "good bad-boy" phase and has transitioned to playing a straight-up psychopath. Here he is Michael Bosworth, first seen escaping from police custody with the help of frightened and loving lawyer Nancy (Kelly Lynch, whose random and gratuitous flashes of toplessness qualify her for the Daryl Hannah Memorial Blonde Piece of Meat Award). Bosworth and Nancy are separated on the way to the getaway car, driven by his brother Wally (Elias Koteas) and a random chucklehead they know named Albert (David Morse, sadly misused). Bosworth decides to wait for Nancy to catch up with them, after she inevitably gets questioned by the cops, so he decides to crash a random house to hide out. The one he chooses is inhabited by Nora Cornell (Mimi Rogers), a recently single mother of two whose ex Tim (Anthony Hopkins) wouldn't mind reconciling.

The idea of three psychos holding a family hostage -- and specifically a family that has its own significant internal strife -- seems like a whiz-bang idea for a slow-burn thriller in which everyone gradually gets on each other's nerves until it all goes bananas. I haven't seen the original '55 version of The Desperate Hours, but I suspect that that's how the story is supposed to go. However, that is not how this movie goes. From the moment Anthony Hopkins arrives at the house with a baseball bat as a present for his son, only to find he has to use it on David Morse, this movie's emotions are dialed up to about an 8 out of 10 -- and they only go up from there. The result is less electrifying than exhausting.

Director Cimino (Year of the Dragon, Heaven's Gate) drowns the action in melodramatic music and overcooked staging. Considering his reliance on 360-degree dolly shots to cover the conversations between Lindsay Crouse and Breaking Bad's Dean Norris as law enforcement on the trail of Bosworth, I honestly wondered if Cimino intended these scenes as parody.

That said, Desperate Hours is not without its thrilling moments, and considering this cast, there's a fair amount of solid acting. Unfortunately, as in the case of The Pope of Greenwich Village, a collection of well-acted scenes does not a great movie make. 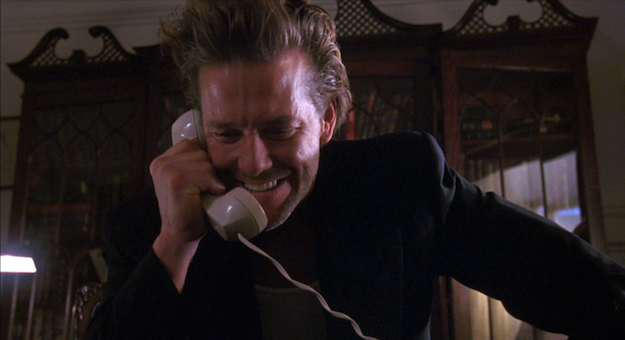 The Blu-ray
Each of the two movies in this Mickey Rourke double feature are featured on their own separate disc, housed on separate hubs within a standard Blu-ray case.

The Video:
Both of the AVC-encoded 1080p 1.85:1 transfers offer a solid upgrade over DVD quality, although Desperate Hours gets a slight edge in the looks department. Pope is mostly clean and consistently stable with no significant compression issues. Detail is inconsistent and often a bit soft, though, and the color palette is on the drab side. This might just be how this film has always looked, but it's still a less-than-stunning presentation. Desperate Hours, however, is noticeably crisper, with satisfying film grain and a much more vivid color palette. The skin tones get a little extra pink at times, but overall, it's a good-looking flick.
The Pope of Greenwich Village video:

The Audio:
Despite the claims of DTS-HD audio on the box, both of these movies feature LPCM 2.0 audio mixes, with Pope in mono and Desperate Hours in stereo. Both of them are powerful and dynamic, and they offer a good mix of dialogue, effects, and music (although the score for both films are often a bit cheesy... but I digress). Both films offer English SDH options if you would like to read during the feature.

(HD upconverted from SD, 7:36) - A vintage EPK that features interview clips with the cast, the director, and producers. It's fluffy, but fascinating as a time capsule.

Final Thoughts:
The cult of Pope of Greenwich Village fans should be perfectly satisfied with this Blu-ray upgrade. While I enjoyed the film, I couldn't help feeling like there's a potentially better movie in this material. Desperate Hours makes for an interesting second feature, but merely as an intriguing misfire. So for fans, this release is recommended, but for new viewers like myself, I suggest Rent It. 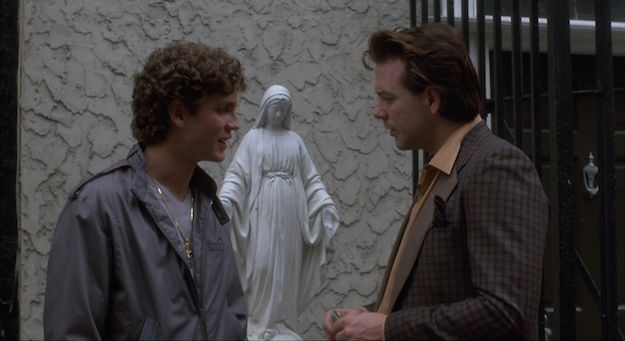