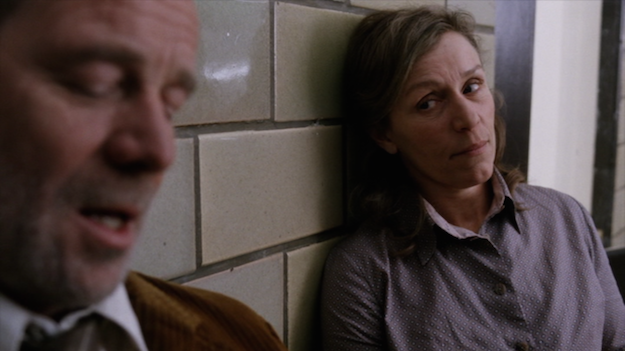 Olive Kitteridge has the running time and quarter-century-spanning scope of a traditional epic, but that is pretty much all that is traditional about this strange and wonderful HBO mini-series. Adapted from Elizabeth Strout's novel/short-story-collection hybrid, the four hour-long episodes of Olive Kitteridge, written by Jane Anderson (The Prize Winner of Defiance, Ohio) and directed by Lisa Cholodenko (The Kids Are All Right), don't present one giant ripping yarn so much as they unravel a number of small ones, sketching in a portrait of small town life in coastal Maine and of one uncommon family in particular. By turns elliptical and discursive, the story of Olive Kitteridge overflows with highly specific details that accumulate to reveal the universal emotions which drive its characters to act the way they do.

The incomparable Frances McDormand plays the title role of stubborn, opinionated schoolteacher Olive. It's a character with the wisdom and gumption of Marge Gunderson from Fargo, plus a hint of the tough motherly love of Elaine from Almost Famous, capped off with a dark, cynical sensibility that not only helps define the character but helps define her journey over these twenty-five years. Just as cynicism is borne out of pain, so is pain wrought from cynicism.

When we first meet Olive, she is old and alone, sitting in the woods, prepping to shoot herself. It's a grabber of an image, but one that is also thematically appropriate. Many characters we are about to meet will die, some by their own hand, some by a quirk of fate, none of them when it seems a fitting time to go. Others will flirt with death and somehow find a reason to keep on living.

We flash back from that scene of Olive in the woods to twenty-five years prior, the time when Olive is teaching junior high math. She's the kind of teacher who thinks that most children are coddled and that the best thing for them is discipline and someone to hold them to a higher standard. She is not one to hold back on an opinion, just to spare a student's feelings. Unfortunately, this approach also applies to the way she treats her husband Henry (the similarly incomparable Richard Jenkins) and her son Christopher (Devin Druid as a kid; John Gallagher, Jr., as an adult). 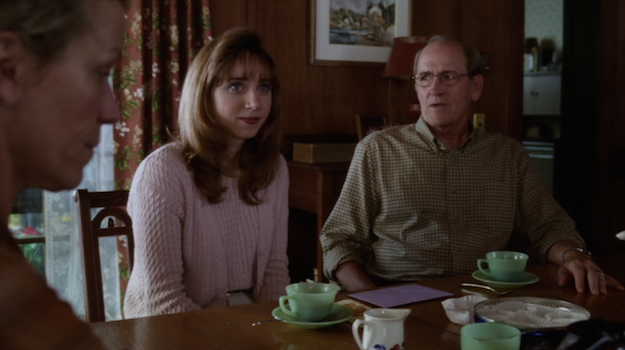 Henry is the kind of guy you would expect to find in a small town: good-natured, sentimental, and unselfconsciously square. Stationed behind the counter of his own pharmacy, he's like a Norman Rockwell painting come to life. He's immediately more ingratiating than Olive, which is possibly why the first episode of the mini-series focuses more on him. Henry hires shy, cute Denise Thibodeau (Zoe Kazan) to help out at the pharmacy and they immediately click. Denise is corny and sentimental like Henry, and he naturally gets a crush on her. He never admits to it or acts on it, not decisively, instead acting like a friend-zoned adolescent who thinks he's satisfied with some hugs and a little attention. Olive mocks him for his affection for "the mouse," but she has her own crush on a brooding fellow teacher Jim O'Casey (a magnetic-as-ever Peter Mullan). It's not much of a spoiler to reveal that neither spouse consummates their crushes, but idle speculation about what might have been resurfaces a few times as the years pass for the characters.

Considering their differences in worldview and temperament, viewers can be forgiven for wondering why Olive and Henry end up staying together for decades. The mini-series subtly suggests that there is a strong love bond there, but the writing is far too thoughtful to chalk everything up to a notion like "love conquers all." In fact, a major portion of the second half of the series deals with the impact such an emotionally unstable household had on Christopher and how it affects his adult relationships with women. (Spoiler alert: it's not easy for him.)

As the story progresses, other characters float in and out of the Kitteridges' lives, such as Kevin Coulson (Gotham's Cory Michael Smith), a grown-up former student of Olive's, who fears he may be succumbing to the delusional state that consumed his mother (Rosemarie DeWitt) years before. Singer-songwriter Martha Wainwright appears as a lounge singer, who is first seen performing at a supper club and appears again years later, performing Laura Nyro in a nursing home day room. Jesse Plemons, of Friday Night Lights and Breaking Bad, appears first as a meek stock boy who works for Henry and then grows up into a real sumbitch. Third-billed Bill Murray actually appears very little in the story (he appears briefly in one scene in hour three and spends slightly more time onscreen in hour four), but his wealthy smart-ass character Jack Kennison nicely provides someone to simultaneously attract and repel Olive at a moment when she -- and the story -- could use a little shaking up.

Considering how dark the story gets in places and how depressed and in pain so many of the characters are, Olive Kitteridge is strangely uplifting. The characters, especially Olive, can be petty and selfish and unfairly hurtful, but the uniformly excellent performances allow us to see the all-too-familiar insecurities at the root of all this bad behavior. And while the story doesn't offer all of its suffering souls pat happy endings, it seems to suggest that there's hope even for the most insecure and unstable of us. And even for we who don't see how we're living as a problem. 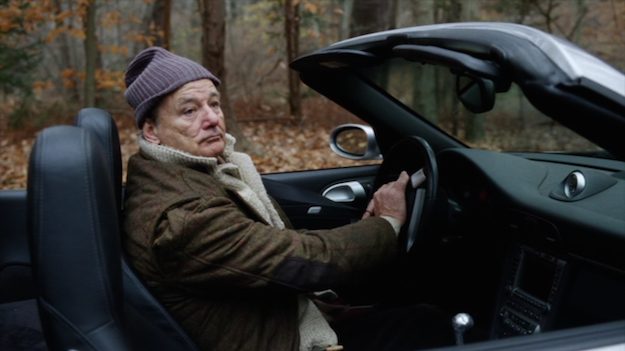 The DVD
Olive Kitteridge is presented on 2 DVDs, with 2 hour-long episodes on each disc.

The Video:
This is quite pleasing for a standard-def presentation. The widescreen 1.78:1 image is clean, with a solid level of detail and strong color reproduction. A few busy wide shots here and there look excessively artifact-y, but they're the only significant bum notes. 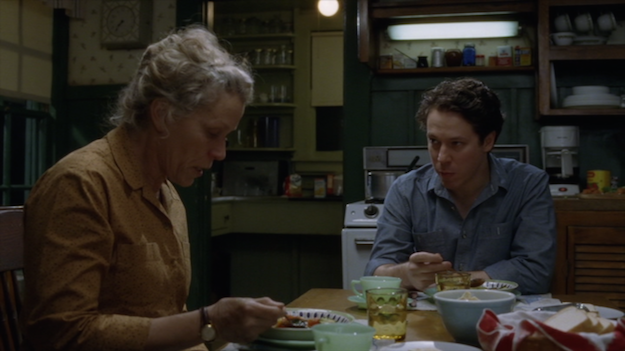