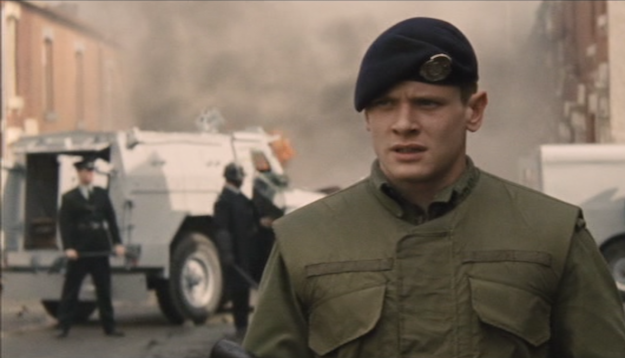 Set in Belfast, Northern Ireland, during the film's titular year, '71 -- whether by design or by accident -- updates the situation presented in Carol Reed's Odd Man Out and also reverses its central dynamic. Odd Man Out featured James Mason as an injured IRA man wandering dazed through the nighttime streets of Belfast, trying to avoid capture by the police and running into people who provide him only the slightest help because they don't want to get involved in a politically volatile situation. In '71, Jack O'Connell (Unbroken, This is England) plays a British soldier who is not political and not religious, forced to wander the nighttime streets of Belfast, trying to avoid being murdered by the IRA -- or one of the groups splintered off of it -- and finding that anyone who looks like they might be able to help him probably has an ulterior political motive that spells bad news.

Carol Reed's film is an existential melodrama that tries to transcend the details of Catholic-Protestant conflict in Northern Ireland, while '71, written by Scottish playwright Gregory Burke and directed by TV veteran Yann Demange, is a mildly paranoid chase thriller that uses those very details about "The Troubles" to summon a portrait of divided Belfast as an untenable quagmire. Both films keep focused on the humanity of their characters -- on both sides of the conflict -- but both films arguably fall short of true profundity. That's maybe not such a grave concern when it comes to '71, which keeps its thematic aspirations relatively modest. On the included commentary track, writer Burke mentions that he took inspiration from films like The Warriors and Apocalypto, neither of which are particularly dumb, but they both make the visceral impact of their protagonists' experiences their primary concern.

And so it is with '71, which begins with young Private Gary Hook (O'Connell) being sent off with his platoon not to some distant war zone, but to a not-unfamiliar-looking area within his own country. The platoon is sent out to back up the local police in a mixed area of Belfast. The cops search Catholic houses for firearms and fugitives. It quickly becomes apparent that this situation is nothing like anything these British boys have ever seen before. The cops are brutally violent, the neighborhood inhabitants are angry and unafraid, and things escalate on the street quickly. A mob forms and soon the underprepared soldiers are attacked with rocks. When a boy steals a rifle from an unconscious soldier, Hook and another soldier are sent to get the gun back. Before they can reach him, a gang of men beat the stuffing out of them. In the midst of this riot, the inexperienced lieutenant (Sam Reid, Hatfields & McCoys) has his soldiers retreat from the area, unwittingly leaving two men behind. A neighborhood woman tries to intervene on the two soldiers' behalf, but soon a shooter takes out one of the soldiers at point blank range, leaving Hook no choice but to run for his life.

O'Connell plays Hook as a relatable everyman rather than a bold hero. For most of the film, he has the simple goal of getting back to an army post, and a reason to stay alive in the form of a little brother currently in the care of the state. The film, of course, complicates his seemingly simple objective by having him fall into the laps of other characters, both well-meaning and not, whose different positions in the Belfast political ecosystem inevitably steer Hook away from quickly achieving his goal.

To the film's credit, there are no mustache-twirling villains interacting with or chasing after Hook. Even the most treacherous character who wants to capture him (whose name I won't reveal to avoid spoilers) has a fairly complex, even convoluted, reason for doing so. '71 is not an activist film, but it pointedly shows both sides of the fight as divided and corrupted during these early days of The Troubles. The Catholic Nationalists squabble for power within their organization, which leads some to make deals with operatives on the Loyalist side. When a Loyalist plot backfires during the film, the divided Nationalists each presume one of the other splinters perpetrated the act, further adding to the chaos.

'71 is largely a well-executed entertainment, which is maybe an odd statement to make about a film depicting such a divisive and potentially raw moment. It fits, though, because as interested as the filmmakers are in evoking a specific way of life and moment in time -- and as well-acted as the film is -- it's a historical action movie, not a scholarly treatise. Arguably the film suffers a little from pushing the history to the periphery to make way for the setpieces, but fans of intelligent action flicks will be pleased.

The Video:
For some blasted reason, we get no Blu-ray release of this stateside. Even so, the widescreen 2.35:1 transfer on this DVD is solid enough to satisfy the less discerning videophile. The beige-and-green color palette reminds me of the Red Riding Trilogy, as though the whole United Kingdom gave up on color in the '70s. Digital compression is mostly problem-free, although certain wide shots have clear moments of aliasing.

The Audio:
This film sports a highly effective Dolby 5.1 surround audio mix that frequently propels the action and provides stylized ambience even in quieter moments. The bass response is incredibly powerful without blowing out your woofer. I like it. English and Spanish subtitles are available, as well as English closed captioning.

- A highly informative discussion. Producer Lamont mentions that the project originated with his desire to do a film about this time period. He frequently touches on the history which served as inspiration, while Demange and Burke discuss the stylistic influences and thematic ideas at play in the film.

Final Thoughts:
'71 is a solid action thriller that places a guileless young soldier in the middle of a deathtrap. The performances are excellent, and the script and direction effectively evoke the war zone that was 1971 Belfast. Recommended.