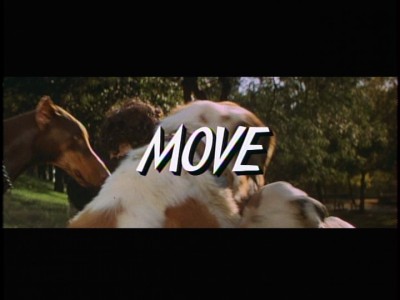 
The Show
Cinema of the 1970s was fascinating. You regularly had major movie studios producing movies that, today, would struggle to be made as independents. Move is a perfect example of that, as Fox put good money behind a film about a man struggling with an identity crisis brought on by an upcoming move to a new apartment. Though Elliott Gould was certainly a big enough star at the time to justify a production, the resulting psychedelic freak-out seems like financial suicide now in retrospect, and considering the film's low profile amongst the works of director Stuart Rosenberg (Cool Hand Luke, The Pope of Greenwich Village) it hasn't risen in stature in the decades since its release.

That's a shame, because Move is an rather interesting film for most of its runtime, only getting a bit bogged down the home stretch. From the first frames, it grabs your attention, as Hiram (Gould) walks through New York City, as everyone around him is moving backwards, making for an interesting visual (if not exactly cleanly executed.) The film will go on to blend reality and fantasy, to the point where it becomes difficult to tell which is which. As we watch Hiram struggle with a number of issues, including his relationship with his wife Dolly (Paula Prentiss), his career (which has dead-ended as a smutty novelist) and his role in society as a functioning adult in society. 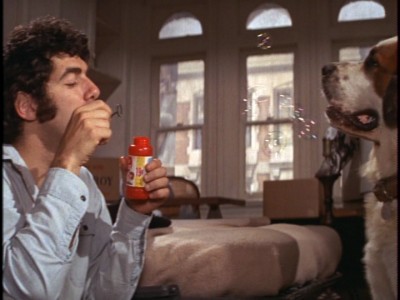 All of these troubles have fallen on Hiram on the eve of move to a new nearby apartment, which has been delayed by the moving company, who verbally abuse him over the phone and call into question Dolly's virtue. A loss of control becomes a theme in the film, a point that comes to a head as Hiram spends time with a model he meets in the park (Genevieve Waite), after losing track of his wife. For most of the film plays in a world of the absurd, including a ridiculous party scene, a horseback chase and the original three-breasted woman (sorry, Total Recall) and it can get away with just about anything in portraying Hiram's mindset, which is spinning toward paranoia and perhaps madness, but it tries to play it straight toward the end, which feels out of joint with the rest of the movie, as he gets lost in a sexual marathon with a philosophical bent.

Gould is quite good in the role of Hiram, playing overwhelmed without becoming whiny, with that sense of humor under the surface that allows you to stick with him as our hero. As Dolly, Prentiss is wonderful, blending beauty, comedy and pathos, which makes you root for her as she stands by her man, whether he deserves it or not. Then there's Waite, who reminds me a great deal of Jayma Mays (which, if you're wondering, is a good thing.) The only problem is, her voice, which has a weird accent blended with a baby voice, is rather difficult to listen to. It's a problem, because she plays a rather large role in the resolution of Hiram's story, but all one can think about is that voice. 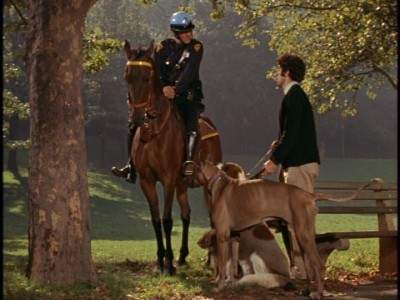 The Quality
Frustratingly, Move is presented in a full-frame...pan and...Nnnnnnggghh...pan and….buuuhhh….pan and scan transfer. Oh, that did not feel good. Apparently we have entered a time warp, where this is not the anamorphic-widescreen-friendly, original aspect ratio-embracing 2015. Even more annoyingly, the film starts in letterboxed widescreen before switching to a 4:3 presentation, in some sort of cruel tease. Thankfully most of the movie occurs in the middle of the frame, but there are points where the lack of widescreen is evident, and one moment actually cuts out both characters in the scene. Beyond the issues with the aspect ratio, the movie looks pretty decent, with good color and some nice fine detail, but it's not consistent, as softness is noticeable in spots and some scenes aren't as saturated as others. Dirt and damage can be noticed throughout the film, but it's only a real annoyance occasionally. Thankfully, digital distractions aren't an issue.

The audio is presented via a Dolby Digital 2.0 track, which is solid, keeping the strong music from Marvin Hamlisch and clear dialogue well separated. The mix is straightforward and center-balanced, with no issues with distortion.

The Extras
The only extra is the film's trailer (2:32), but it's a classic--a strange, verging on psychedelic montage that attempts to explain the film without revealing much of anything. Today, it would be a red-band trailer, with nudity, profanity and one heck of a final note. A quick look at YouTube doesn't turn it up, so its inclusion is a welcome treat. 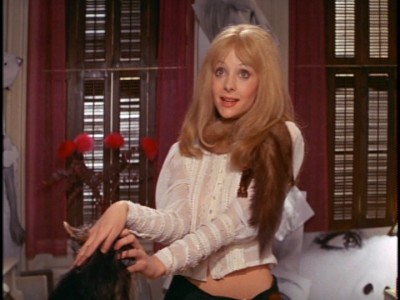 The Bottom Line
Move is a product of its time, but it's so unusual that anything dated about it becomes charming, at least until things slow down in the final third and the strange energy that carried it drains away. The leads are all entertaining and there's an artistry that covers over a slight lack of plot. The presentation is a bummer, considering the 4:3 aspect ratio, and extras are limited, making this one impossible to recommend, but it's definitely worth watching.