Captain Z & The Terror Of Leviathan

Other // Unrated // May 19, 2015
List Price: $11.95 [Buy now and save at Amazon]
Review by Jeremy Biltz | posted July 12, 2015 | E-mail the Author
The Movie:
I have a special love for independent, low budget movies, but they are particularly difficult to make well. Small budgets, short schedules and unexpected challenges can all derail the program, so when an indie movie even gets finished, it's an accomplishment. And it's with that perspective that it is best to watch Captain Z and the Terror of the Leviathan. 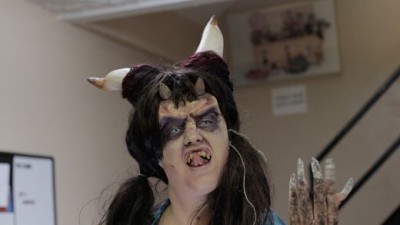 Captain Zachariah Zicari (played by writer Zoltan Zilai, based on a character he created for a local TV commercial campaign) stopped a group of demons from resurrecting the Leviathan in 1741, but was sucked into another dimension along with them as a result. Many years later, when Captain Z has become a local folktale, with a museum dedicated to him, a couple of redneck fishermen find an enchanted amulet, read its inscription and let the demons back into our plane, along with Z. The demons are led by Vepar (Aleen Isley), and she needs the amulet and a redheaded wench to complete the ritual and summon Leviathan.

Luckily, help is available in the person of Dr. Glen Stewart (writer/director Steve Rudzinski), a sort of Indiana Jones style expert on the occult, who happens to be visiting the library. Soon, he and airheaded museum employee Heather (Madison Siple) run into Z and work together to thwart Vepar's bloodthirsty plans.

The film is supposed to be a dark fantasy comedy, and there are a few chuckles. But the humor only sort of works, and not all the time. The cast appears to be having a lot of fun, but the timing is off or the jokes are just a bit awkward. Remember the short schedules I mentioned? It looks like there wasn't enough time to get all of the gags perfect, and that's a killer in a comedy. The performances are decent to good. Zilai and Rudzinski commit to their roles, as does Isley. Rudzinski is even fairly engaging and dynamic. But the story mostly falls flat. Events just seem to tumble forward, and actions are taken for no reason or bad reasons. For instance, why do they go to the house party when Vepar and her demons are searching for them and hell bent on destroying the world? Apparently because it affords an opportunity for Captain Z to be a fish out of water and provide some laughs. 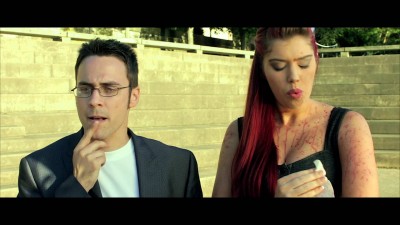 And then there's Heather. Siple does a decent enough job portraying her, but the character is rock stupid. I'm talking the kind of stupid that makes it difficult to believe she could function in society. I don't have any deep philosophical objection to a ditzy girl character, but Heather strains the bounds of credulity, and therefore most of her jokes don't fly. The audience just doesn't buy it. Having said all that, the pirate costume for Captain Z is pretty good, as are the effects and makeup, and there is a sense of fun and adventure to events. As I said, everyone seems to be enjoying themselves. You'll probably enjoy yourself as well, to a degree. If you keep in mind that this is a film made for very little money, but with lots of love, you'll have a better appreciation. Rent it.

Video:
The image is 1.78:1 widescreen, and looks pretty good, particularly during daylight scenes, when things are crisp and bright. Nighttime scenes tend to be a bit too dark, obscuring the action. Aside from a bit of grain from time to time, there really are no other video problems.

Sound:
Audio is Dolby digital 2 channel, with no subtitles. The dialogue is generally easy to make out and no hiss or other problem can be heard, so I'd say that it's successful, but no great triumph.

Extras:
The most significant extras are two commentaries, the first with Rudzinski and Zilai, along with the director of photography Scott Lewis, who also has a part in the film, and the second which has those three plus actors Aleen Isley, Madison Siple, Lacy Brooks and Seth Gontkovic. Both are entertaining, and have a lot of set anecdotes and stories about props, costumes, etc. For instance, apparently the dress they bought for Siple was too small, and her breasts were breaking out during one scene, causing focus difficulties for Scott Lewis, acting opposite her. These are worth listening to. There is also a blooper reel and a trailer.

Final Thoughts:
Captain Z and the Terror of the Leviathan is a movie with a lot of heart, that can't quite execute as well as it wants. This is probably due to a low budget and rushed schedule, so I am inclined to judge it leniently. It is fun enough, but not fantastic. Check it out if, like me, you like to watch something other than this week's blockbuster.