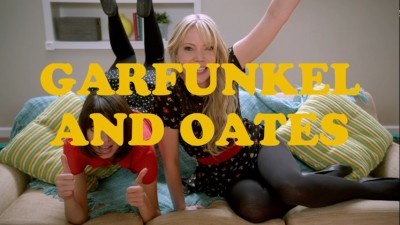 
The Show
A while back HBO put out a handful of shorts featuring the musical comedy duo of Riki Lindhome and Kate Micucci, known better as Garfunkel and Oates. Together, like Voltron, those scenes made up a pilot of a show similar in feel to Flight of the Conchords, but unlike the Kiwi version, HBO didn't bring the distaff pairing to series. Instead, a few years later, IFC, which has been trying out alt comedy, brought eight episodes to the airwaves before pulling the plug.

Perhaps the similarities with FOTC kept HBO from getting on-board, but aside from the general concept of a musical duo trying to make their way in the world, the shows were hardly mirror images. Garfunkel and Oates exists in more of a real world, with the pair coping with realistic issues like dating co-workers or dealing with a bad show, while struggling with self-doubt but sometimes getting a win. It could get weird at times, like when a porn version of their act becomes bigger than them, and it could get surreal, with animation and puppet scenes, but at its heart the series deals with real emotions and finds laughs in them, aided by a fantastic guest cast featuring Kumail Nanjiani, Natasha Leggero, Abby Elliott, Moshe Kasher, Tig Notaro, Anthony Jeselnik, Chris Hardwick, T.J. Miller, Busy Philipps, "Weird Al" Yankovic and, incredibly, Sir Ben Kingsley. 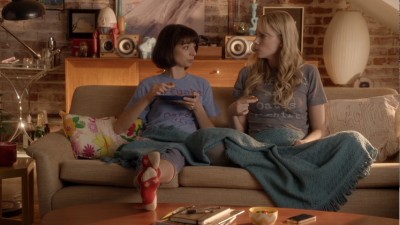 Though certainly not timely, the series could be topical, touching on topics like misogynistic comedy criticism, extended adolescence and social media behavior (along with far sillier things, like getting your weed card for non-existent illnesses.) Surprisingly, the final two episodes have a touch of seriousness to them as Riki and Kate face the idea of growing up and the concept of motherhood. That this shift doesn't feel jarring or disconnected following the previous six episodes points to the series' ability to build characters and make you care for them amidst the laughs.

Of course, the music is the focus of the act and thus is a big part of the show, with each episode featuring at least one musical interlude tied to the story. Rather than rely solely on past hits, there's a mix of new and old, including standouts like "29/31", an ode to the effects of turning 30; the beautiful, but possibly trademark infringing "Rainbow Connection" and the sharp "I Blame You," which features truly bizarre imagery influenced by a bland acquaintance. The classic song "Pregnant Women Are Smug" makes a return, but its odd dance-party segment in this series can't compare to the law- party version in the HBO pilot. 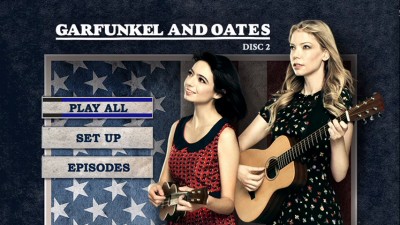 The Discs
The first (and sadly only) season of Garfunkel and Oates arrives on two MOD DVDs, packed in a standard-width, dual-hubbed keepcase. A static menu offers a choice to play all, select shows and adjust the set-up and. There are no audio options, but subtitles are available in English SDH and Spanish.

The Quality
With just four 20+-minute episodes per disc, there's plenty of room on these MOD discs to allow for a quality presentation, and these anamorphic-widescreen episodes look quite good, with a nice level of fine detail and bright, appropriate color (which is bolder during the fantasy musical numbers.) There's some minor pixelation in the edges of a few scenes, but it's the kind of thing you have to search out rather than easily notice. Overall, a good-looking set.

The 5.1 Dolby Digital audio offers up clean, strong dialogue from the center speaker, but when the show moves into a song, the center speaker drops out and the surrounds carry all of the music and voices. As a result, there's no real separation in the music, with the side and rear speakers boosting the same tracks. A few outdoor scenes have some minor atmospheric effects, along with some score in the surrounds, but for the most part they are quiet. Low-end activity and movement/directionality is minimal, as the ukulele doesn't lend itself to bass or panning.

The Extras
For once, an MOD actually includes genuine extras, as each episode has an optional audio commentary from Lindhome, Micucci and director/executive producer Fred Savage (whose presence allows Micucci to admit her Wonder Years crush.) Production stories are the main focus, with talk about the porn studio they shot in, the challenges of low-budget TV and the "invisible geniuses" who made the show happen. They also mention one of the possibilities if there had been a second season (still a possibility at the time of recording.) The only bummer here is the trio's discussion of other extras they'd like to include, like outtakes and material they showed at the series' wrap party. Unfortunately, we don't get to enjoy them. 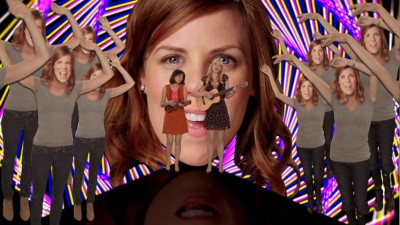 The Bottom Line
Though it only lasted eight episodes, Garfunkel and Oates was rather fully-formed from the first minute (thanks to the embryonic HBO pilot) and told some entertaining stories supplemented by their music (instead of the other way around fortunately.) This release brings home the show in solid quality, and though it's an MOD title, it has some good, informative extras. Fans will want to own thing to return to and to hear from Lindhome and Micucci about how it came together.