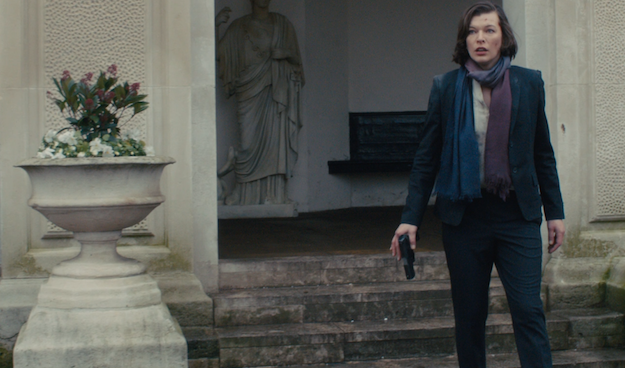 It's hard to put a finger on what exactly doesn't work about the new chase thriller Survivor. It seems to have all the component parts of a decent action flick: a solid premise, a talented cast, and some well-executed foot chases. Somehow, though, these elements never coalesce into an ultimately fulfilling experience. Maybe it's the routineness of the plot (not always a liability for an action flick). Maybe it's V for Vendetta director James McTeigue's meat-and-potatoes approach to filming the action. Maybe it would be more fun to see Milla Jovovich fighting and killing bad guys, instead of just running away from them. Maybe we would rather see Pierce Brosnan as an erudite, talkative character instead of a cold-blooded stoic. It could be any or all of these ingredients, inoffensive on their own, but somehow combined to create a cinematic stew that does not manage to hit the spot.

Jovovich stars as Kate Abbott, the new head of security at the American Embassy in London. She does background checks on visas to prevent terrorists from getting into the US. Almost immediately, though, one of her immediate superiors with the confusingly similar surname Talbot (Robert Forster, a long way from Jackie Brown), tells her to not be so thorough in doing her background checks. Oh really? Is he maybe in cahoots with some terrorists? Maybe? Just maybe?

Brosnan plays a bombmaker and assassin nicknamed The Watchmaker who takes on the job of taking Kate Abbott out of the picture before she mucks up the big fireworks show he has been planning for New York. He blows up a restaurant where Kate and her colleagues are eating lunch, but -- wouldn't you know it? -- Kate had stepped out just before the blast and is now on the run. In fact, she's on the run from both sides of the law, because The Watchmaker is after her and her colleagues after her too, because they think she must have something to do with the blast. Angela Bassett has the thankless job of playing a US Ambassador who is so resolutely wrongheaded about the events that have occurred as to be a cartoon character. Dylan McDermott plays the man in the middle, who must answer to the Ambassador but who knows that Kate can't be responsible for all this wrongdoing. In a strange marriage of exposition and weird character rationalizing, McDermott's character exclaims, "She lost friends on 9/11!," as though that is some sort of definitive proof she's with the good guys. It doesn't, of course, but maybe it helps explain why her character would bother to travel all the way to New York to thwart The Watchmaker's dastardly plans.

Survivor was clearly made on a low budget as far as action thrillers go, which seems like the perfect opportunity to use the smaller scale to get to know our characters better. Instead, we just get a few superficial details from their backstory. Jovovich does a good job expressing Kate's trauma and the way she uses her job to deal with it, but we never get to dig into that mental state in a meaningful way, leaving us detached from our heroine. Similarly, it's kind of cool to see Brosnan as a calculating vicious killer, but his character is such a one-dimensional construct that it's nearly impossible to fear him or even feel all that interested in him. Of course, plenty of action movies get by without strong characterization, but this one probably needed it.

The Video:
This AVC-encoded 1080p 2.40:1 presentation offers what looks like a fairly faithful reproduction of a new digitally shot film. The film has a fairly drab, cold color palette, but skin tones look accurate throughout. Fine detail is crisp. I noticed only a few very minor digital compression issues.

The Audio:
The packaging and disc menu trumpet a Dolby TrueHD surround mix, but my player reports only 2 lossy options: Dolby 5.1 surround (448 kbps) and Dolby 2.0 stereo (192). That aside, the surround mix is actually quite powerful, with many action scenes taking advantage of the surround channels for impressive directional effects. An early scene with a helicopter in combat does an excellent job of placing the viewer in the middle of the action, much like a similar sequence in Jack Ryan: Shadow Recruit. Otherwise, everything sounds clear and sharp. Two subtitle options: English SDH and Spanish subtitles.

Final Thoughts:
It's hard to shake the feeling that all the great actors in this flick are uniformly squandered. Still, if this movie came up on cable, I wouldn't blame you for refusing to change the channel. It's not totally stupid or totally dull, it's just not particularly memorable either. Rent It.