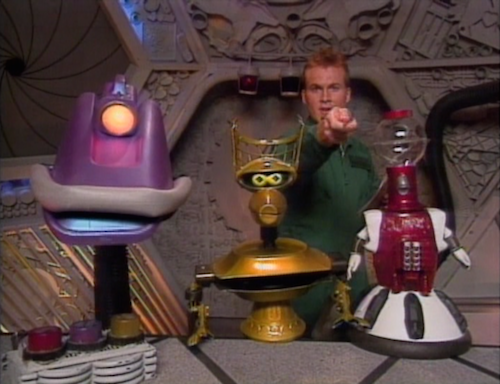 Shout! Factory has been the home for DVD releases of everyone's favorite TV show that turns cinematic trash into comedy gold, Mystery Science Theater 3000, since 2008. Though Shout! is the latest and greatest company to distribute the show, Rhino offered up MST3K stand-alone discs and 4-pack collections during most of the '00s. The Rhino releases have been out of print for a while, but Shout! is finally doubling back and re-releasing new versions of those Rhino sets. The bad news? The newly re-minted Mystery Science Theater 3000: Volume 1 does not have the elaborate packaging of the 2002 Rhino original, and it doesn't offer the option to watch the films without the Satellite of Love crew blabbing over them (although, honestly, I'm not convinced viewers would really want to check out these four films unheckled). On the plus side, though, this version does come with a few cool new extras, and it retails at a cheaper price than the typical MST3K set.

MST3K doesn't depend on you the viewer understanding its backstory to enjoy it, but here's a brief rundown of the story so far. A mad scientist, Dr. Clayton Forrester (Trace Beaulieu), and his daffy sidekick, TV's Frank (Frank Conniff), conduct experiments on a poor unsuspecting employee (show creator Joel Hodgson as Joel in the first half of the series; the series' long-time head writer Michael J. Nelson as Mike in the second half) by sending him out into space indefinitely, on a ship nicknamed the "Satellite of Love" (presumably after the Lou Reed song?) while forcing him to watch terrible movies, supposedly to "monitor his mind." The original test subject, Joel, was a handy sort of a guy, so he managed to construct a bunch of robots to keep him company. Crow T. Robot (usually voiced by Trace Beaulieu), a gold spray-painted collection of odds and ends, and Tom Servo (usually voiced by Kevin Murphy), a sentient gumball machine, sit in on the B-movie madness and trade heckles and asides that often incorporate pop culture references, both familiar and WAY obscure. The giant puppyish cyclops Gypsy (usually voiced by Jim Mallon) helps keep the ship running while the unheard, typically unseen Cambot... well... he records the show.

These 4-movie packs are tricky, because they are assembled from different seasons of the show, with no apparent rhyme or reason. Like any decent person, I prefer the Joel episodes to the ones led by Mike (although Mike is fine), and these collections rarely offer an even split. In fact, this one provides just one (decent enough) Joel show from season 2, followed by three Mike episodes of varying quality, all from season 6. If you are new to MST3K and that "Volume 1" gives you the impression that this is a good starting place for the show, it's not really. Folks who are already fans, however, will find this an overall above-average compilation with only one truly frustrating episode in the mix. 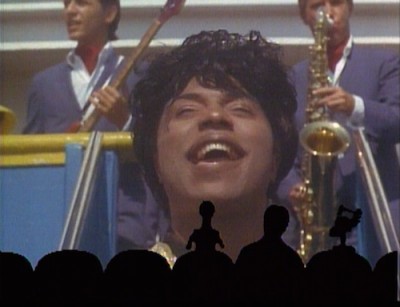 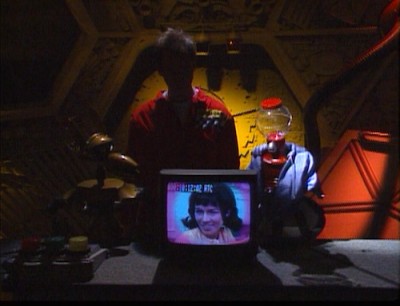 A valuable art scroll is stolen by an Allan Sherman lookalike and taken to his bosses, who resemble the Howells from Gilligan's Island, out on Catalina Island. Meanwhile, some "teenagers" (played by actors clearly in their twenties and thirties, including former Disney kid actor Tommy Kirk) try to soak up the sun and score with some chicks. Inevitably, these two contingents get in each other's way and hijinks ensue.

This is a solid outing for Joel and the bots, with plenty of misfired comedy, stiff musical performances, and incomprehensible plotting to pick apart. Little Richard makes a brief singing appearance, and the SOL crew theorizes that the stock-still, glassy-eyed musician is most likely "hopped up on goofballs" during his phoned-in performance. A running riff has the gang anticipating hilarious slapstick from Robert Donner (Exidor from Mork & Mindy), only to have his telegraphed physical gags perpetually fall flat. (Get it? "Fall flat?" Like a pratfall? A pratfall you knew was coming? Get it?) The bots seem particularly pleased with the shimmying bikinis on display. At one point, four beauties stand next to each other, looking off the side of a boat, which garners the comment, "They're standing four abreast!" Tom Servo also shows off his oddly impressive pipes in a doo wop musical tribute to a character he dubs the "Creepy Girl" (Ulla Strömstedt). 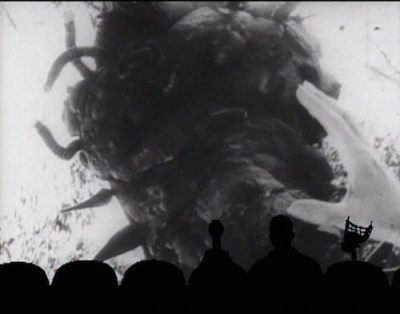 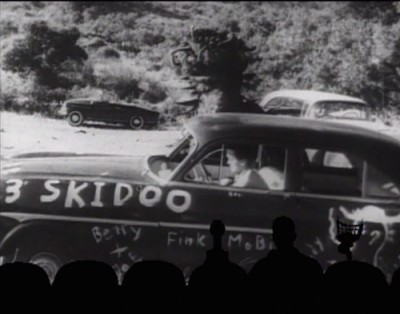 Sometimes a movie that is deadly dull can be brilliant fodder for MST3K, with the long, dialogue-free stretches offering plenty of space for riffing and bantering. Unfortunately, The Creeping Terror is a movie that feels like it's a million hours long, even with the show's witty retorts. A spaceship crashes and a giant alien, which resembles a rolled-up carpet, gets out of the ship, slithers around town, and ingests a dozen or so people who don't have the sense to just walk away from it. Producer-director-editor-star Vic Savage stages his action with the utter ineptitude of the Z-movie greats. He also managed to lose almost all of the sound recorded on location, so the majority of the film is described by a voice-over narrator -- including what were obviously supposed to be long dialogue scenes.

To paraphrase Mike and the bots, the "Creeping" portion of the title is apt, but the "Terror"? Not so much. The SOL crew manages to get in some good jokes in fits and starts -- especially about the way the actors playing the victims tend to have to feed themselves to the carpet monster -- but even they seem to spend stretches of this movie just sitting bored and silent. One of the host segments features Mike testing out new stereo equipment by playing some tinny, maddeningly repetitive dance music from the film for a solid minute or so while simply gazing into the distance; it's an oddly experimental gag for the show, but one that makes sense in response to this movie that takes forever to do anything. The Creeping Terror is the kind of turkey that needs to be seen to be believed, but I'm not going to pretend that the experience will be pleasant. 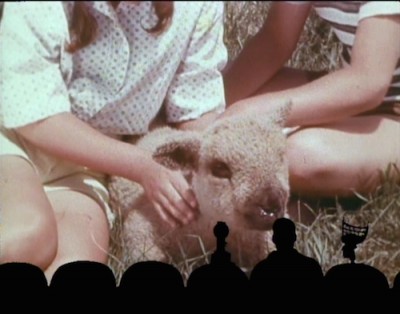 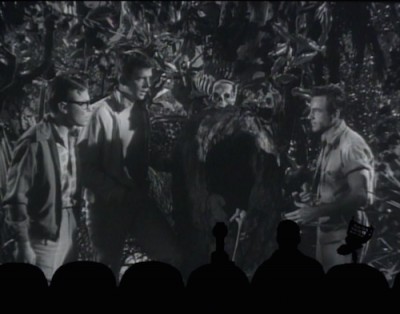 Things pick up with this ten millionth variation on The Most Dangerous Game, in which a quartet of young people (including Robert Reed, nearly a decade before The Brady Bunch) ends up on a mysterious island run by a mad doctor who is fond of hunting and taxidermy. While his home is plainly full of stuffed animals, he also has a special hidden museum full... of human trophies!! MWA-HA-HA-HA!

While the acting and directing are pretty cheesy, this flick at least chugs along more effectively than The Creeping Terror, which seems to keep the jokes flowing in a steady stream. Highlights include the moment where Reed can be seen clearly sucking in his gut and an odd run of stuffed bear jokes (example: "In college, I was an Ursa Major!"). The flick is fairly short, which means the feature is preceded by -- my favorite!! -- an educational short subject. This time, it's about a delightful visit to a dairy farm!

My only major complaint with this episode is that the host segment sketches are pretty scattershot. I prefer it when the host segments riff on the foibles of the film in question, but these blackout bits consist of random silliness that doesn't quite hit the spot. 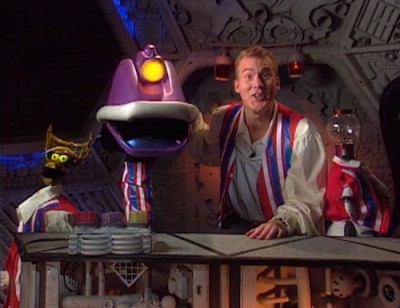 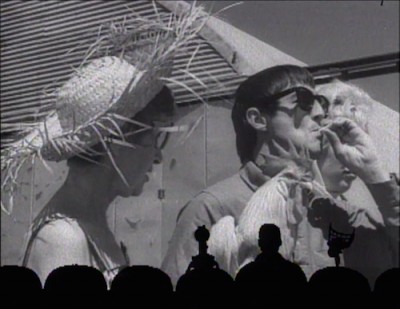 This is the strongest episode in this batch, from the post-credits sketch (a show choir medley competition between the mad scientists and the SOL crew) to the gloriously stupid short (an ode to industrial arts [you know, shop class] that begins with narration seemingly stolen from a slash fic story) to the cavalcade of stiff and amateurish acting that is the feature presentation. The story of The Skydivers, if it can be called that, focuses on a small New Mexico airfield where a troubled couple provides air trips for thrill-seeking parachutists. Hearts are broken, lives are lost, but the most dramatic arc in the film involves a long-unfulfilled promise of a cup of coffee.

The film's bad editing, stiff dialogue, and coffee fixation are all perfectly roasted (like coffee beans!). Extended shots of taxiing planes inspire Mike & Co. to provide delightful cartoon banter for "Petey the Plane" and his "father." Our brave riffers even manage to call back to the lead-in short a few times ("Due to my education in industrial arts, I knew my wife was having an affair"). Oddly, the relatively sedate film gets quite energetic at the end with an over-the-top rockabilly dance party ("It's turned into a John Waters movie") and a harrowing final jump. 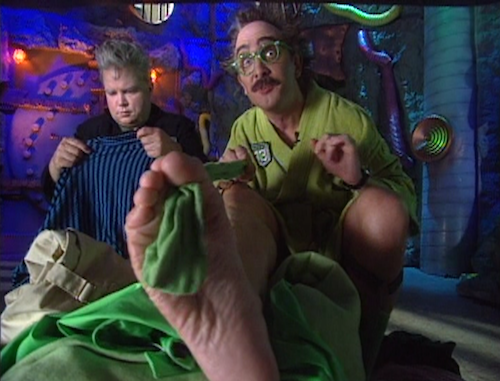 The DVD
The 4 DVDs of Mystery Science Theater 3000: Volume 1 come packaged in a standard-sized keepcase, housed on two sets of back-to-back hubs.

The Video & Audio:
MST3K isn't a show about looking or sounding great, so it doesn't really. Both the standard 1.33:1 image and the Dolby 2.0 mono audio are perfectly acceptable and don't interfere with the comedy. But, the video is pretty noisy and indistinct while the feature film audio can get muffled in patches (the color commentary is always clear and distinct).

(17:29) - A slickly edited and concise history of Crown International Pictures, the low-budget picture company that provided all four of the films included in this set. The featurette paints the company as a slightly lesser cousin to exploitation powerhouse AIP, albeit one that stayed afloat longer than their better known counterpart.

Final Thoughts:
If you already own this set, there's no need to buy it again. The new bonuses are cool, but not cool enough to warrant a whole new purchase. For folks who love MST3K and missed out on the original Rhino release, I think this is a solid enough set to merit a spot in your personal collection. Even the dullest episode here, The Creeping Terror, is at least bizarrely fascinating while the best episode, The Skydivers, is a frickin' laugh riot. Recommended. 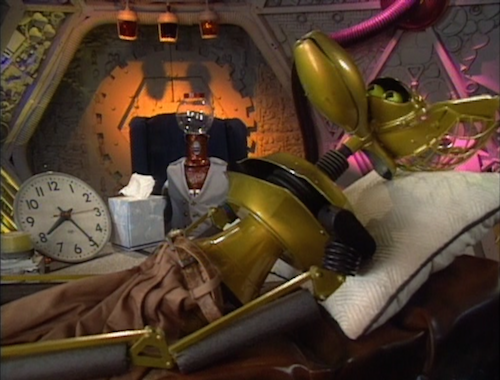