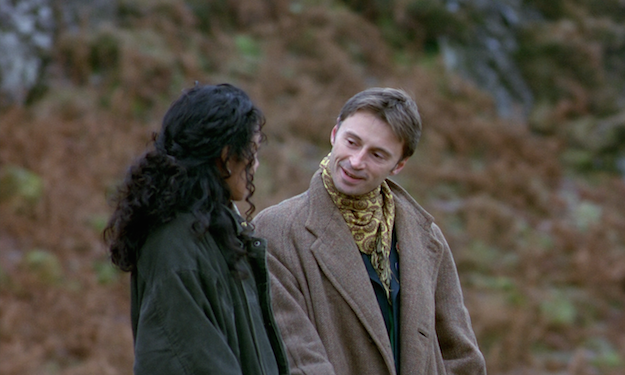 In attempting to dramatize the traumatic conflict in Nicaragua between the Sandinista government and the CIA-backed Contras, screenwriter Paul Laverty and director Ken Loach decided to start in an unusual place: Glasgow, 1987. Their 1996 drama Carla's Song is a wartime romance without the scope and grandeur of a David Lean epic. In place of spectacle is a painful, realistic human drama as seen partly through the eyes of a well-meaning but naive Glaswegian bus driver.

Loach's Riff-Raff star Robert Carlyle plays the bus driver in question, a likable man-of-the-people sort of bloke named George who lets old ladies take extra tickets at his expense. This kind of behavior gets him in trouble with his bosses, but he doesn't really care. George is on the verge of settling into a "normal" life, with a solid job and a nice fiancee (Louise Goodall, from Loach's My Name Is Joe), but he seems too restless and free-spirited to accept what he has. Maybe that's why he becomes fixated on a pretty young Nicaraguan woman (Oyanka Cabezas) who skips paying on his bus and then gets busted and harassed by a ticket inspector. George pays her fare to get the inspector off her back, and when that doesn't work, he distracts the inspector so she can run away.

One gets the feeling that Glasgow is a small town -- or maybe it's just movie magic -- because George starts seeing this woman all over. She dances in the street for pocket change, and George is captivated. He tries to get to know her -- invites her for coffee, asks for her phone number -- but she is reluctant to let George know anything about her. He finds out that her name is Carla and that the phone number she gave him is a fake. He finally follows her home to her run-down hostel and bursts in past the guard to get some answers. This stunt gets her kicked out, but George offers her the spare room in a mate's flat.

As appealing as Carlyle makes George, it's hard not to wonder why this man is so stuck on this woman. Is he really that dedicated to helping her? Or is he that madly infatuated? Or is he just looking for something new to take him away from the bland, prescribed life he seems destined to have? The film intimates that it's probably a mix of those three but not necessarily in the healthiest ratio. When Carla explains that she has a boyfriend back in Nicaragua with whom she lost contact and worries about, George buys them both tickets to Nicaragua. The film does not explicitly decide whether or not this is the right move, but it makes it clear that George has no idea what he is getting himself into.

The second half of the film concerns itself both with the gradual uncovering of the personal mysteries Carla has been keeping locked away and the disillusionment of George's character, as he witnesses firsthand the cruelty and brutality that Nicaraguan peasants are suffering at the hands of the Contras. Scott Glenn appears as an ex-CIA operative who has been doing humanitarian work in Nicaragua, but has failed to lose his hard edge. He yells at a volunteer for turning a report into an emotionally driven personal essay. He colorfully describes to George what happens to the body to cause it to involuntarily defecate from fear. He's a jerk, but Glenn's performance makes it clear that he behaves this way because he's probably seen dozens of do-gooders come and go with little meaningful impact on the ground.

And while Carla's Song doesn't give short shrift to its love story -- one of the film's highlights is a charmingly convoluted pre-lovemaking scene where George and Carla try to undress each other with their teeth -- it's hard not to view the film as a portrait of a man who fundamentally doesn't understand this woman he thinks he loves or the world from which she has come. The film allows Scott Glenn's character to lay some blame for this ignorance at the feet of foreign governments who lie about what is going on, and specifically about their involvement in de-stabilizing Nicaragua, but there's also a pervasive sense that love will not conquer all here. Sure, love might help salve the pain of losing a good-paying job, say, but what can it do when your friend has had his spine broken and his face melted with acid by soldiers?

There is catharsis at the end of Carla's Song, but it's not a typical movie happy ending. The film ends on a note of disappointment that, in some ways, makes the viewing a little disappointing too. But Carla's Song is also the kind of film that will live on in your brain for days, allowing you to chew over the choices that the characters made for better or worse. It's not a universal crowd-pleaser but Carla's Song goes to places a lot of films wouldn't dare, and for that alone, it is worth a look. 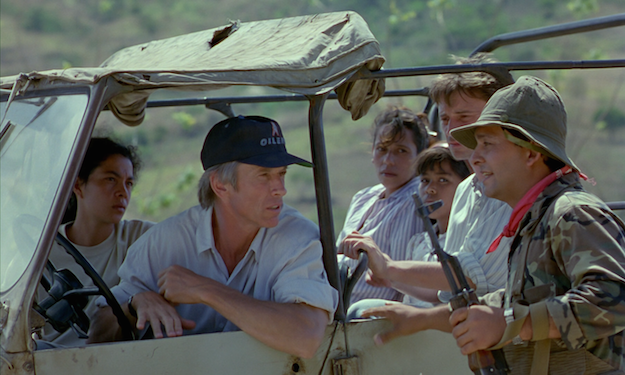 The Blu-ray
Carla's Song comes in a limited edition of 3000 copies. It is accompanied by a color booklet featuring an essay by Julie Kirgo.

The Video:
Considering its low-budget origins, the AVC-encoded 1080p 1.66:1 presentation is surprisingly crisp, vivid, and clean. Barry Ackroyd's naturalistic photography beautifully contrasts the foggy, rainy atmosphere of Scotland with the hot jungle of Nicaragua, and it translates perfectly here. A flashback sequence looks a little indistinct and smeary, but I'm assuming this is intentional post-production futzing to give that moment a specific look.

The Audio:
For better or worse, the DTS-HD MA 2.0 stereo audio mix attempts to approximate the off-handed naturalistic aesthetic of the visuals in aural terms. This means that sometimes in a crowded scene, the dialogue will be cleanly recorded but get buried in a sea of ambience. This is a little frustrating to American ears, because even in ambience-free scenes, it can be a chore to parse the Glaswegian and Nicaraguan accents of the lead characters. And, as with Twilight Time's 2 by Ken Loach disc, we are offered no subtitles to help us with the more colloquial or thrown away bits of dialogue. There are some burned-in English subtitles during moments of Spanish dialogue, but that's it.

- There are some long silent stretches during this track, but a lot of good conversational gems too. At one point, Loach half-jokingly says the limpness of the title is his fault and that they should have called the movie Crazy Driver, Crazy Dancer. They also provide interesting anecdotes about the production of the film and extrapolate further on its themes.

Final Thoughts:
As with many of Ken Loach's films, Carla's Song deals with politically left-leaning characters but tries to find the real-life human drama in their struggle rather than crafting vapid propaganda. His leading couple is earthy and sympathetic, and their journey is unusual and illuminating. Twilight Time has given us another attractive presentation (although subtitles still would have been nice). Recommended. 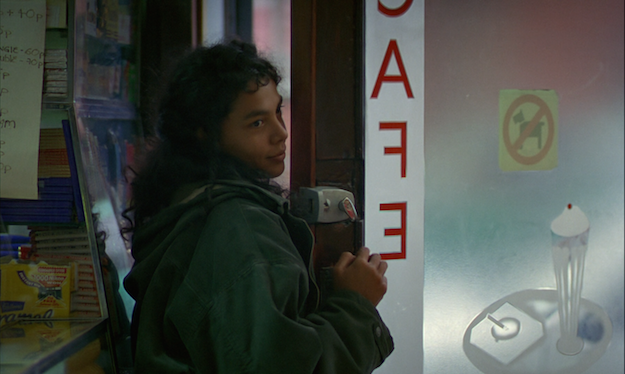