After the runaway success of the Despicable Me franchise, thanks heavily to children around the world going apes--t for the protagonist's linguistically-challenged goofy yellow henchmen called Minions, it was only a matter of time for other animation studios to jump on the lucrative yellow pill-shaped bandwagon and come up with their own cuddly, cute, and clueless ripoffs. Months before the release of the Minions movie, where the interchangeable merchandise moneymakers got to star in their own vehicle, Dreamworks animation released Home, an absurdist and trippy road movie for little kids, about an aloof goo-shaped alien and a little girl embarking on a globetrotting adventure in a flying car. 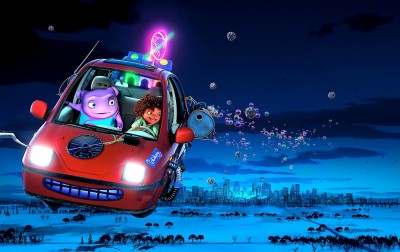 This time around, the nearly featureless, cute yet incredibly dense creatures du jour are an alien race called the Boov, who are proud of their perpetual cowardice and change colors depending on their mood (Perfect opportunity to sell different colored Boov toys to kids). The Boov are stuck in an intergalactic chase, running away from an evil alien race called the Gorg, whose leader looks so much like Zurg from Toy Story 2 that I wouldn't be surprised to hear of an out of court settlement between Dreamworks and Disney before Home's release. The Boov decide to settle on Earth as their new hiding spot and dump all humans into a nauseatingly friendly suburbanite prison in Australia (That choice of location is one of the very rare references that adults can enjoy).

At the center of the wholly unexceptional story is Oh (Jim Parsons), a prototypical lovable loser archetype whose unchecked enthusiasm turns other Boov off. In an attempt to make friends, Oh accidentally sends his house warming party e-vite to the entire galaxy and inadvertently alerts the Gorg of the Boov's location. While running away from Boov authorities who are looking forward to lynching him for ruining their cushy new set up, Oh hooks up with Tip (Rihanna), a smart and precautious teenage girl looking to rescue her mother (Jennifer Lopez) from the human prison.

Oh and Tip force each other into a partnership: If Oh helps Tip find her mother, Tip will help Oh get away from the other Boov. As they embark on their perilous journey to Australia in a flying car powered by 7-Eleven concessions like Slurpees and nacho cheese (A cleverly irreverent joke that the film unfortunately runs to the ground whenever it runs out of ideas), Tip and Oh form an unexpected-for-them, entirely-expected-for-the-audience type of friendship.

As obnoxious as some of Home's aesthetics becomes as a desperate attempt to attract little kids with a constant assault of bubble gum colors, there are some impressive visual touches in the overall project. An engaging action set piece involving The Eiffel Tower flipping upside down in mid air is one of the rare sequences that adults can enjoy with their children. It's also refreshing that the main human character in a major animated film is a girl of color, and that her ethnicity is barely even referenced to in the screenplay.

However, the story is entirely too predictable for anyone, including children, who have seen similar animated fare in the past to truly enjoy Home as a refreshing piece of family entertainment. You don't have to be a film critic to predict every single story beat during the third act. Will Oh defy his race's trademark cowardice in order to stand up to his megalomaniacal leader (Steve Martin), as well as the Gorg? What do you think? 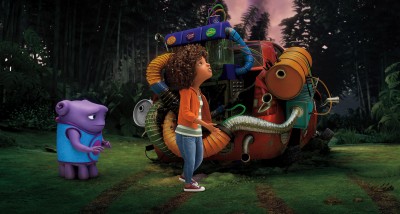 Even if you're not interested in the story, you can use this Blu-ray to test how well your system handles bright, warm colors. As predictable and sometimes annoying I found the film's color scheme to be, the 1080p transfer represents them perfectly without any color bleeding and with astounding clarity and definition.

The DTS-HD 7.1 track is not demo-worthy, but Home's surround-heavy mix will give your system a workout. The film has a very enjoyable and benign sci-fi action-adventure sound mix, you'll get a kick out of it especially if you're a fan of Rihanna and J-Lo's music (I'm not, so the volume button really came in handy during scenes that crank up the original songs those two recorded for Home).

Best Party Ever: Basically a trailer for the extra feature content that you already own. Why does this even exist?

Oh's Party Place: A series of music and party-based features, with music clips from the movie, J-Lo's music video for the film (With or without lyrics), and a short film where Oh shares his party planning tips.

Short Boovies: Three 2-4 minute animated shorts giving the audience the back-story of the Boov. Cute, but not essential.

Be An Artist!: An amusing series of educational short films that teach kids how to draw the characters from the film.

Stars of Home: A very short featurette where the voice actors talk about their characters.

We also get a Gallery of images and a Trailer.

As simple distraction for young children, Home is an unremarkable yet harmless piece of entertainment that wraps an entirely too predictable story around obviously heavily focus-grouped cute alien characters. If it wasn't trying too hard to imitate the Minions, it could have turned into an irreverent sci-fi comedy, like a kids' version of The Hitchhiker's Guide to the Galaxy.