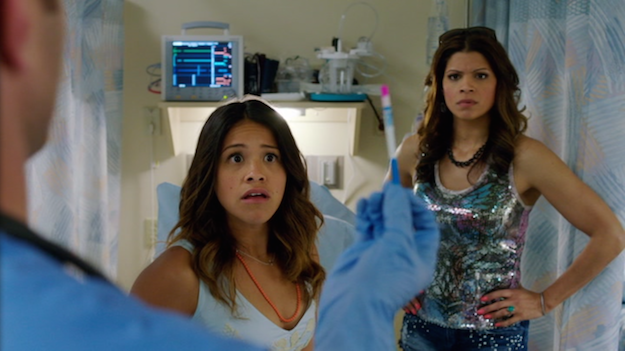 For viewers typically averse to soap operas, Jane the Virgin requires a few episodes to get adjusted. But it's worth it. This romantic dramedy takes its basic idea from a Venezuelan telenovela, and it is unrepentant in its soapiness. Thankfully, it is also funny and self-aware. Each episode features a tangle of storylines that range from low-key believability to outlandish melodrama, so the creators of the show helpfully provide humorous "Latin Lover" narration (from voice-over veteran Anthony Mendez), plus oodles of quirky onscreen chyrons, to help keep track of the series' copious twisting plots. But, like any good serial, Jane the Virgin actually makes its well-rounded characters the main focus.

Gina Rodriguez stars as Jane Villanueva, a twentysomething "good girl" who has decided to save herself for marriage, under the influence of her religious grandmother Alba (Ivonne Coll) and as a reaction against the fate of her single mother Xiomara (Andrea Navedo). But that's the funny thing about fate. You can save yourself for some future husband, and you can still end up pregnant. That is, you can, if you go into the doctor's office for a pap smear, and the distracted doctor filling in for someone else artificially inseminates you instead.

It's an outrageous premise, but one that is just real enough that we could believe it in a viral-news-story-that-gets-passed-around-Facebook kind of way. It helps that Rodriguez is absolutely never contrived in her characterization of Jane, allowing us to sympathize as the horrifying and humorous tribulations multiply around her.

Because, you see, she doesn't just have to explain about her freak pregnancy to her mother and grandmother, she has to make it make sense to her police detective fiance Michael (Brett Dier). And, well, it also turns out that the father of the baby isn't just a random guy, it's Rafael (Justin Baldoni), Jane's hunky playboy boss whom she's been crushing on ever since he kissed her once five years ago. Yeah! It's true! And the doctor who accidentally inseminated Jane? She is actually Rafael's sister Luisa (Yara Martinez)! Omigod!

Rafael has cancer and so he wants the opportunity to raise the baby. Jane is focused on completing school to be a teacher, so she is willing to give the baby to Rafael and his wife. But Rafael's wife Petra (Yael Grobglas) is a nefarious gold digger, egged on by her scarred, fortune-telling mother Magda (Priscilla Barnes... yeah, THAT Priscilla Barnes). Rafael would divorce Petra but, of course, Jane would never allow the baby to be raised in that kind of potentially neglectful environment.

And speaking of neglectful fathers, it turns out that Jane's long-lost father is famous telenovela star Rogelio de la Vega (Jaime Camil), who has just recently found out about her existence and wants to bond with her. Even though the entire cast is excellent, Camil is particularly impressive as Rogelio. The character is broadly comic and superficial, but Camil shows Rogelio's humanity and vulnerability lurking underneath that facade as effectively as he delivers the character's big dumb punchlines. 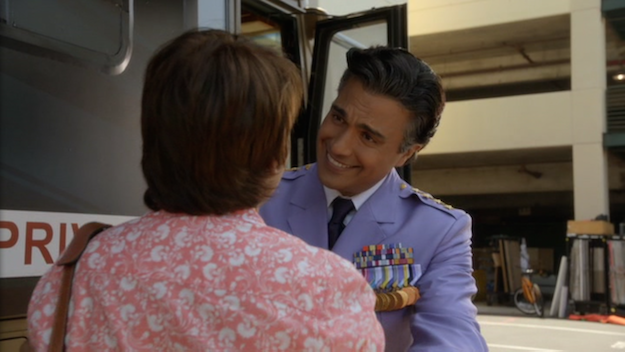 That's a lot of characters and situations, and I've barely skimmed the plot of the first few episodes here.

Like any good soap, Jane the Virgin mines a lot of material from the secrets that characters keep from each other. Rather than spoil a bunch of this season's revelations, allow me to just briefly indicate some of the ways that the writers (headed by Something Borrowed screenwriter Jennie Snyder Urman) shake up this family drama with over-the-top telenovela-style contrivances:

Jane is unwittingly embroiled in the search for a "faceless" drug kingpin. A supporting character is sent to an insane asylum for threatening to reveal an affair. Other characters are revealed to have completely faked their identities.

Yet the trick -- which the show nimbly pulls off -- is never losing track of that core family dynamic throughout all the wilder story events.

As someone who has gotten snobby about shows, to the point that a series drama needs to be astonishing to garner my attention, I was ready to dismiss Jane the Virgin for how typically "TV" it is. Even though the show toys with the telenovela form, it doesn't get experimental and "meta" with it; instead, it provides a fairly heartfelt tribute to this kind of serialized storytelling.

What turned me around and got me hooked was the warmly realized and nicely detailed portrayal of the characters. I appreciated the way that Jane's abuela Alba only speaks in Spanish, though she clearly understands when the other characters speak to her in English. I found it touching the way that the different generations of characters are basically going through the same coming-of-age process: both would-be writer Jane and would-be singer Xiomara must decide to pursue their creative dreams or give them up for something practical, while Rafael and Rogelio both try to figure out what it means to be a father after years spent in selfish indulgence. I was pleasantly surprised by the way that even the cartoony villains like Petra have an underlying humanity and legitimate reasons motivating their despicable behavior.

Maybe it has the rhythms and look of "typical TV," but Jane the Virgin definitely digs a little deeper. And that's the reason that I applaud this first season and look forward to seeing where the twists lead us from here. 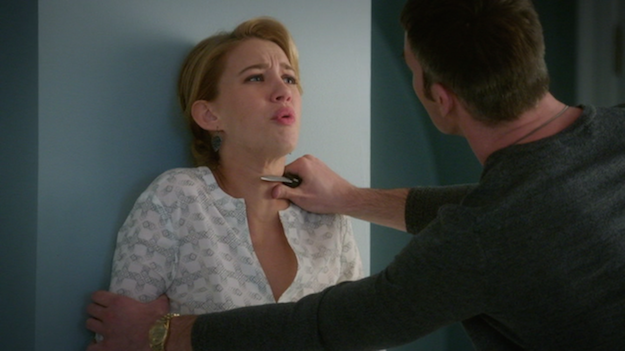 The DVD
Jane the Virgin: The Complete First Season feature 22 episodes spread across with 5 discs. The typical disc includes 5 episodes and some deleted scenes, while the last disc includes the majority of the bonus features.

The Video:
Jane the Virgin looks excellent on DVD. The widescreen 1.78:1 presentation is exactly what one would wish for a brand-new show. Rich, vibrant color. Inky blacks without crushy. Good detail for standard-def. No significant compression artifacts. Now, just put out the Blu-ray version too!

The Audio:
The sound also delivers on the main English Dolby 5.1 surround track. The dialogue is clean and discernible at all times. There is decent ambience throughout and the score benefits nicely from the surround treatment. A dubbed Portuguese Dolby 2.0 stereo option is also available. And the disc offers English SDH plus French, Spanish, and Portuguese subtitles.

(9:24 total) - Mostly short inconsequential pieces scattered throughout the season, although there is a sizable fight sequence between Michael the cop and his brother.

Final Thoughts:
Jane the Virgin earns its reputation as one of the best new shows on TV. Thanks to a flawless ensemble cast and a sensibility that never sacrifices the believability of its characters (even when the plotlines get more and more outlandish), this show is downright addictive. More in-depth bonuses would have been nice, but you can't win 'em all. Highly Recommended. 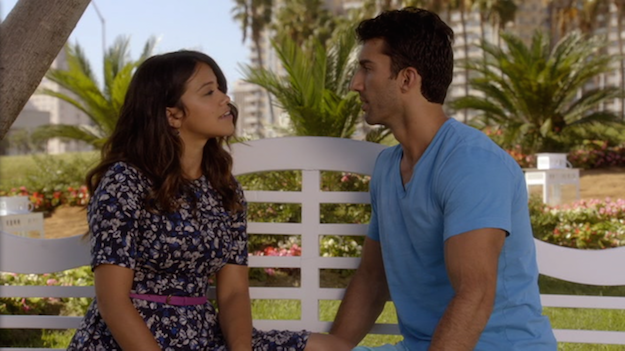